The trails climbing the slopes of Krakova hoľa are waymarked either blue or yellow. (Please see the online map in the next chapter.) The last stretch of an ascent is a short dead-end path from a trail junction named "Pod Krakovou hoľou". The table below compares ascents via - all or most of the time - blue marks with the most convenient starting points in either of the main valleys: Demänovská dolina to the west and Jánska dolina to the east of the long lateral ridge which branches off the main ridge of the Lower Tatras at Krúpova hoľa (at the west end of the Ďumbier Massif) and runs north to Krakova hoľa and then farther on to Poludnica.

The summit of Krakova hoľa can also be ascended from the south, via the saddle of Javorie (1479m), with which it is connected by a trail marked yellow. However, a route through this saddle seems to be a better option for a descent, especially when it is about to be getting dark and you are heading for the Jánska Valley. From Javorie the yellow trail runs on south as far as the main ridge (less than 2 hours' walk away), whereas the red marks drop west and east, into the valleys. It should take you about 40 minutes to get from the summit of Krakova hoľa to Javorie. From there you should reach the bus stop at a place called Lúčky (which translates as "little meadows") in the Demänovská Valley in less than five quarters of an hour while a stroll east and then north down the road (a reasonable option after dark) to Liptovský Ján will take about three hours. The shortest round trip to the summit of Krakova hoľa - about four hours' walk - would be: Lúčky-Javorie Saddle-Krakova hoľa-Pusté-Demänovská Cave of Liberty. 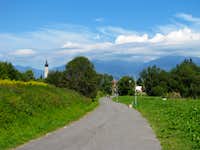 Liptovský Mikulaš, the capital town of the region is easily accessible by both road (D1 motorway) and rail (one of the oldest railway lines in Europe; several Intercity and fast trains a day). The distance between Liptovský Mikulaš and the trailheads is less than a dozen km.