The normal approach on Krasji vrh is quite simple and straightforward. It goes from Zaprikraj alpine meadow, but on the description below also the direct approach from the village below is mentioned.

0. General: From 1208 m to 1768 m, exposition E and N or S. A comfortable path first through woods, then over a grassy terrain. The last meters on top are a bit steeper. Gear: Good shoes and poles. By the Swiss Scale for grading hikes the difficulty would be T2.

3. Psyche: 2 - easy. Only a few places below the summit require some care.

You drive by car on Zaprikraj alpine meadow from Kobarid, via Drežnica and Drežniške Ravne.

The marked path follows the mountain road, but does many shortcuts. On the altitude of 1040 m it then deters from the road and continues through the woods towards the N and later NW. It joins the path from Zaprikraj meadow in the woods in a shallow valley on some 1250 m. 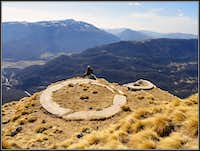 Koluji are posts from the World War I, just south below the summit, on the place, where the southern slopes start dropping down more steeply, also intermitted with rocks. On an exposed, ridge like position there are two circular, posts, made of concrete (presumably for heavy guns), which dominate the surroundings. You can ascend the summit of Krasji vrh also directly from there, but it is more recommended to return towards the east and continue by the normal path.

If on the 1449 m crossroads we continue towards the NW, the path also soon brings us out of the woods. It goes by the right slopes of the valley (looking upwards) and we soon come to another crossroads, where we see an inscription "Snežna jama" (Snow cave). Left below is a cave in which you can also in summer find snow rests. But we continue in the same direction and soon come below the summit dome of Krasji vrh. Below is a deep basin (with a cage on its bottom - for WW1 remains), and more on the right, on the ridge above it there are many posts from the World War I. The marked path goes by the right edge, then across a small plane and the northern slope just to the undistinct north ridge. By that ridge then we ascend more steeply on top. Also this variant is easy, although in the winter 2012 it happened to us that despite a winter, poor with snow, the N slope was covered with very hard snow and even ice. And we were without crampons and with only one ice pick.