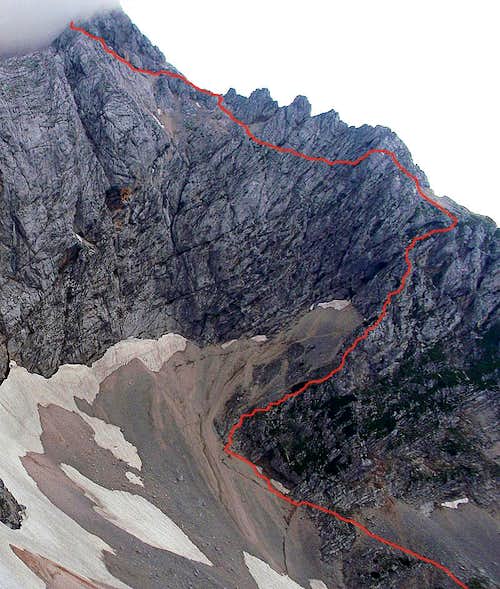 The route
The grading system for hiking and scrambling routes is here.

0. General: From Ravenska Kočna (valley), 1090 m to 2540 m, exposition E, N and S. First by a broad path to the hut, then across scree slopes till the entry and by the ferrata on top. By the Austrian 6-grade scale this ferrata would be rated B. By a Slovenian classification it is "zelo zahtevna označena pot - very demanding marked path" Gear: Good hiking shoes and poles.

See the overview information about Kočna mountain on the parent page!

Kremžar route is one of the most scenic and beautiful secured paths (ferratas) in the massif. It is named by Franc Kremžar from Jezersko resort, who opened it in the beginning of 20th century. At that time it was quite a demanding ascent and even today, when perfectly secured, it requires an experienced hiker, knowing no vertigo. As the ascent is long a steady concentration and stable weather are required.

The departing point of Kremžar Route is the beautiful Češka koča (hut, 1543m). It can be reached from both valleys, coming up from Jezersko - from Ravenska and from Makekova Kočna by marked paths. The eastern approach is for some 30 minutes shorter (about 1 hour 15 minutes).

From Češka koča the marked path goes first a bit towards the west, but on scree slopes soon turns towards the south. We gain heigth, approaching the north walls of the main ridge. On the altitude of around 1800 m there is a crossroads. The left path goes to Mlinarsko sedlo and on Grintovec, while the right one is our option (inscription: Kočna).

We turn slowly towards the SW, gaining heigth. Before entering the rocks the path avoids unpleasant screes by the right, the path over screes is very useful downwards. The entry point into ferrata is quite high, on some 1900 m. The path first goes by the side ridge of Kocna's north-east ridge. The scenery is great. Wild towers, steep rocks and towards the east the whole range of Kamnik Alps. The route seeks best passages, climbs from ledge to ledge and also directly up until we reach a panoramic notch. There, almost on the NE ridge of Kočna the path turns left and starts crossing the rocks very much. In a place or two we even descend a little. The path is all the time good marked and secured.

This part of the route is quite exposed, we are moving all the time above the eastern walls of Kočna, falling steeply down on snow fields. After a considerable crossing, the route turns up again and reaches the NE ridge of Kočna. But we are still not on the main ridge Kočna-Grintovec! We just shortly climb up the ridge. The route is soon stopped by a rocky tower, which must be detoured by the left side again. Crossing the upper part of Kočna's E wall is soon over, the path turns finally up again and towards the left exits on the main Kamnik Alps ridge.

The lowest part of Kočna-Grintovec ridge is called Zdolška škrbina, 2270m (notch). But we are higher than that point, in the direction towards Kočna. Here is a good place to leave rucksacks, unless you have strong reasons to carry them 30 minutes more on top. The reason in a narrow passage below a fat 'belly', which you will reach in a minute.

So, from the ridge above Zdolška škrbina the route follows the ledge below Kocna's east ridge, on the southern side of it. At first glance the huge, rounded walls will not allow us any passage. But on the most tricky part a shallow ledge leads us under rounded 'bellys'. Most of mountaineers here push their rucksacks (if having them here) in front of them, also if you go more on the outer side, the passage is not just easy. But difficulties are soon over and a comfortable ledge leads us further towards the east. Only at the end the path climbs a little, gains the summit ridge and leaves it again on the ledge running left of it. The last meters of ascent are steeper again, in a short, easy climb we reach the summit rocks.

Kremžar route was first done as an alpinistic ski tour in 1994. The skiers were Davo and Drejc Karničar. The picture here is from the report (in Slovenian language) about the repeat in 2009 (Drejc Karničar).