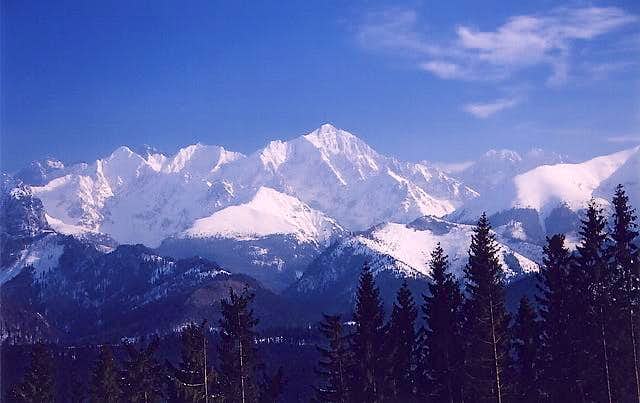 Panorama from Glodowka (Poland) Admired from north side ,from Polish Podhale highland Ladovy presents its whole beauty and majesty in magnificent and monumental view. No surprise that for centuries the peak was considered by Polish highlanders as the highest one in whole Tatra Mountains. The whole Ladovy massif area offers great high mountain tourist and alpine climbing possibilities (among others famous 250 meter high, southern wall of Maly Ladovy Stit(2602) …) ,breathtaking views of post-glacial alpine landscape ,wild nature and unforgetable Tatra adventure! It is worth to remember that Modre Pleso(2157) (POL:Lodowy Stawek ,Icy Lake) is the highest located mountain lake in Tatras and it is situated in a stony hollow east under Sedielko Pass(2372) (Icy Pass) – the highest Tatra pass accessible by marked route. Nowadays rocky but in 19th century slopes on both sides of Sedielko Pass were covered by wide firn fields. From time to time, in favourable weather conditions and clear air one can see rocky pyramid of Ladovy from some higher located places of Cracow city distance : about 100 km). It is probably the most characteristic object of northern panorama of High Tatras while looking from the south from Slovak Spis highland or Liptov it may be quite difficult for some many to distinguish Ladovy in a sea of prominent peaks between Slavkovsky Stit(2452) and Lomnica(2632) group. Lodowy Szczyt as it is known on Polish side takes also some special symbolic place in polish highlanders’ history, culture and folklore. One of the greatest Polish poets of interwar period (“Mloda Polska” – so called “Young Poland” literary period) Jan Kasprowicz(1860-1926) dedicated one of his most famous and beautiful poems to Lodowy …”O wierchu ,ty Wierchu Lodowy! …” talking to the peak seen out from the window of his house as to old friend. First ascent : Probably mountain huntsmen from Jurgow in the end of 18th century . First documented “tourist” ascent: 31.08.1843 - John Ball (Irish alpine climber and botanist), Wilhelm Richter and Hungarian painter of unknown name together with mountain huntsmen from Jurgow. They reached the summit climbing Suchy Zlab (Dry Gully) from Dolina Javorova (Javorova Valley). First winter ascent : 28.12.1891 - Theodor Wundt (German alpinist) and Jakob Horvay (guide) in a snowstorm. This ascent is considered as the top record-breaking performance of 19th century’s Tatra climbing alongside to Lomnica Peak winter ascent. From the early years of the second half of 19th century Ladovy Stit became popular among skilful Tatra tourists and climbers especially Poles. The whole “Ladovy climbing project” usually starts from Stary Smokovec beautiful spa, ski and mountain tourism centre on Slovakian side of Tatra Mountains (check KALAMITA 2004 section) You can get there easily by bus or electric train from town of Poprad. Poprad has very good communication links with whole Slovakia and Zakopane on northern, Polish side of Tatras. Slovak bus and train connection search The nearest airports to Tatra mountains are located in Cracow(100 km) in Poland and in Poprad nearby in Slovakia. Cracow Airport Poprad-Tatry Airport Our mountain trip to Ladovy Stit(2628) leads from Stary Smokovec to Hrebienok(1285) and then higher and higher through great Mala Studena Valley. There is a cable railway from the center of Stary Smokovec to Hrebienok. Theoretically you can start your adventure with Ladovy Peak hiking from the northern side through over 10 kilometer long gorgeous valley of Javorova Dolina beggining in small, picturesque village of Tatranska Javorina 4 km from the border line with Poland .Unfortunately it is usually problematic to find good accommodation place in Javorina. 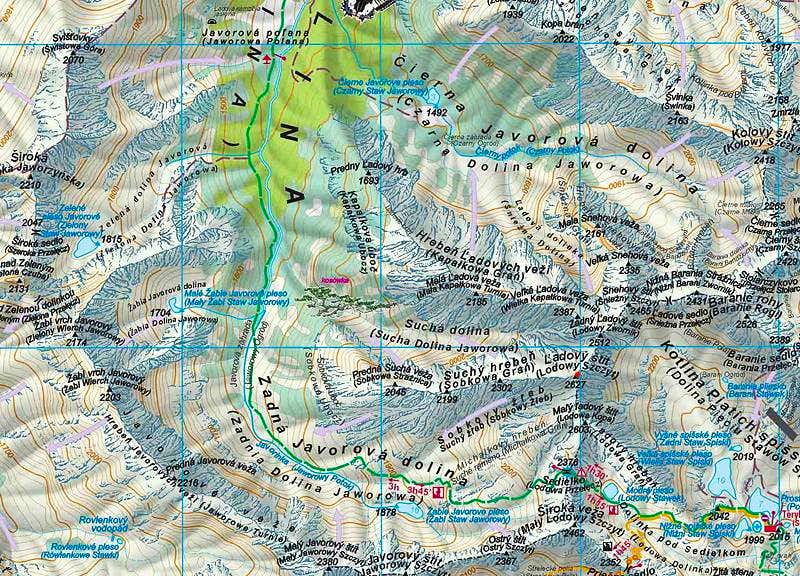 It is Tatra National Park (TANAP) area, there are no entry fees but you can hike using only marked trails. Many “non-marked” peaks or passes like Ladovy, Gerlach, Lomnica, Mengusovsky Velky or Satan for example - are accessible “legally” with licensed Tatra Guides. Slovakian Tatra Mountain Guides’ Union Lots of places to stay overnight in Stary Smokovec from attractive private houses to stylish pensions and luxury hotels. There are a few chalets high in the mountains which can be a great base to attack Ladovy Peak. First of all there is very popular Teryho Chata (Tery’s Chalet) situated on a rocky terrace at 2015 meters on the highest floor of beautiful Mala Studena Dolina (Little Cold Valley) called 5 Spisskych Plies (Five Spis’s Lakes) surrounded by imposing ,vertical ,granite walls of gorgeous towers of Prostredny Hrot(2441) (Middle Ridge) ,Ladovy Stit(2628) (Icy Peak)and Lomnica(2632). It’s definitely the best choice when you want to start climbing Ladovy early morning next day .In lower section of the same valley, near to the upper border of forest You’ll find another place to sleep . It is Zamkovskeho Chata(1475) (Zamkovsky’s Chalet). If You dispose some larger amount of ca$h You can choose Mountain Hotel at Hrebienok(1285) or Bilikova Chata Hotel(1255) just at the entry to Mala Studena Valley. Camping in Tatra National Park is strictly forbidden (besides some special camping fields for climbers, none of them is situated in the area of Ladovy massif).

Dramatic history of the most mysterious Tatra tragedy . It was one gloomy ,windy and rainy August day of 1925 … Warsaw’s procurator Kazimierz Kasznica (46) with his wife ,12-year old son Waclaw and experienced climber Ryszard Wasserberger (24) were descending path from Sedielko Pass (POL:Lodowa Przelecz – Icy Pass) towards Javorova Valley. Higher over the lake (Zabie Javorove Pleso – 1886) boy began to complain of breathing difficulties so mother took his rucksack and Wasserberger were helping him in walking down. Near the same lake father Kasznica suddenly sat down and declared that he is too tired to go further. Immediately Mrs Kasznica asked Wasserberger to help her with husband …”I feel so weak too” – he only answered. Disoriented woman seat her little son and their young guide together under cover of nearby huge rock and give both a sip of cognac … After that she came back near her husband with the bottle but he was unconscious and died in a few moments …When she returned jittery to the rock … she found her child dead ,the dead body of Wasserberger lied just below the place … Everything last for about a quarter of an hour ! Poor woman spent a day and two windy nights by the corpses … After that time she managed to descend to Javorina and call TOPR (Polish Tatra Mountain Volunteer Rescue formed formed in 1909). Precise ,many years’ investigations connected with necroscopic studies didn’t give any explanation for this tragedy …Though many various speculations and suppositions throughout the years this history still remains a mystery … Only mountains know the truth what really happened that day under Ladovy…

On 19th November 2004 dramatic news ran around Slovakia and neighbouring Poland. During a few afternoon hours that Saturday extreme hurricane devastated southern part of Tatra Mountains turning beautiful forest land into a land of ecological disaster … The destructive blast (wind up to 200 km/h) destroyed about 13 000 hectares of mainly spruce forests on southern foots of High Tatra up to the level of 1200 meters above sea level. Traditional ,idyllic landscape of Stary Smokovec or Tatranska Polanka looks now like it has been just after atomic bomb explosion . That’s really sad especially for all those who were admiring beauty of this part of Tatras for long years and now they all see the scale of destruction . Nature showed its power … It will surely take long years to rebuild forests but Slovaks don’t surrender and huge works go on 24 hours a day … Tatras have been wounded seriously but not deadly ! TANAP Analysis of “Kalamita 2004" Some photos of the distaster