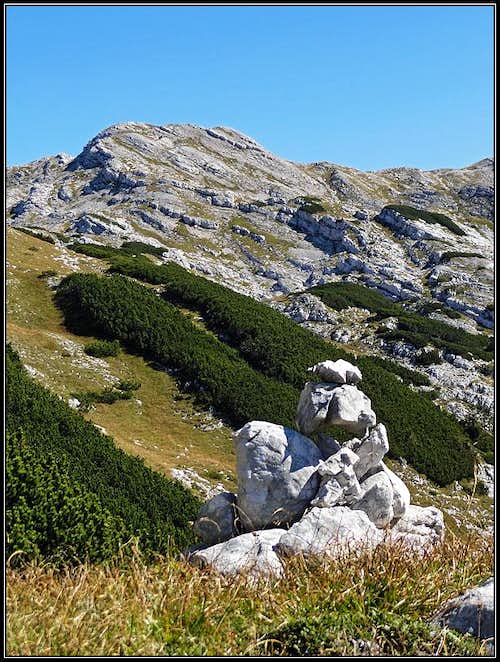 Lanževica is not at all the highest summit above Komna, but still, it stands above the plateau as one of its most popular summits and one of the most characteristic summits of that high karst world. If in summer conditions perhaps some more people visit the neighbouring Bogatin, then in winter Lanževica is much more visited. It is easy, very nice for tour skiing and very panoramic.

The summit rises north of Bogatinsko sedlo, 1803 m. This important pass connect Komna world with Krn group, so a broad, comfortable mule track crosses it. From there we have only 30 minutes to the summit of Lanževica. Further towards the north from Lanževica a strong mountain crest goes - first on the neighbouring Kal, then further towards Triglav group. That crest is the natural border of Bohinj world. Towards the east, from Lanževica a ridge of rounded mountains stretches, lowering down on Komna plateau. The firs nearby neighbour is Vrh nad Gracijo, 1916 m, then Srednji vrh, 1872 m, then the ridge lowers considerably. South of this ridge there is the valley of Gracija, north of it the plateau of Lepa Komna. Also the world towards the NW and SW of Lanževica is similar. Gentle slopes, intermitted with some rocks are falling some 200 meters on a plateau-like area. A broad ridge connect Lanževica with a bit higher summit of Velika Baba on the west.

As Lanževica rises on the middle of a broad plateau, the views in all directions are not much obscured. It is not a very high summit, but as all considerably higher summits are quite far away, the panorama from it is really broad and nice. It is hard to decide which of the three main sections of the 360 degree view is more beautiful:
> Towards the north and east we see the Triglav group and Bohinj group.
> Towards the west we see the Krn group and high mountains in the western part of Julian Alps.
> Towards the south and east we see the South Bohinj range and Bohinj valley.

A part of great Lanževica panorama - towards the north and east

The view towards the west - on Krn group and behind Kanin.

The view towards the east and south - on the South Bohinj Range.

The most natural way to reach Komna plateau (and Lanževica) is from Bohinj valley. The road at the end of Bohinj finishes on the altitude of 654 m. There is a big parking place (fee) and a mountain hut. To Dom na Komni (hut, hotel, 1525 m) you will walk some 2 h 30 min and your luggage can be transported by a material cable-car.

The other possibility is from west, from Lepena valley, where the road ends on 700 m. There's also a mountain hut. For general orientation see the Julian Alps page. 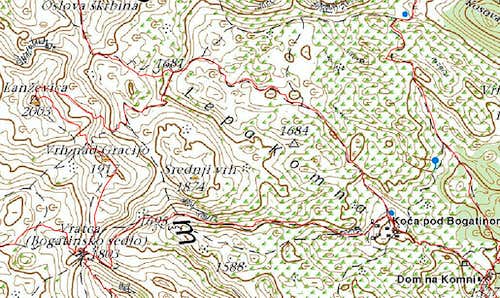 Lanževica is easily reached, even if we would attempt a pathless approach. Some of most recommended summer routes are the following:

2. Go from Dom na Komni only to Koča pod Bogatinom. There turn right, ascend on Lepa Komna plateau and go by the marked path towards the NW to Poljanica. There turn left and ascend Lanževica over its NE slopes. 2 h 30 min, easy.

3. Go from Lepena to Dom pri Krnskih jezerih, 1385 m. 2 h till there. Then continue towards the east on Bogatinsko sedlo and northwards on top. 2 more hours, easy.

4. Go from Vrsnik (parking place on 650 m) by a marked path towards the SE on Planina Za skalo, 1510 m. 2 h till there. Above the meadow the path branches. For Lanževica we must take the right branch, which goes towards the south on Oslova škrbina, 1825 m. Then by a pathless main ridge towards the south on top. Altogether 4 h, easy, some steeper sections on the summit ridge. 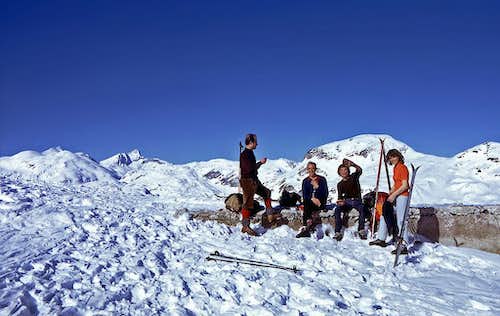 I don't know how many people do the skiing from Lanževica towards the SW. That would be possible, continuing further towards Krn lake. But the standard two ski tours on Lanževica are the following:

1. Over Bogatinsko sedlo. I guess this tour is most frequently done, because the track to the important saddle is almost always well beaten. So, this is an easy, classical Komna tour. We follow the track from Dom na Komni to Koča pod Bogatinom and further above the valley of Gracija. If there is a danger of avalanches or in very poor conditions, you should better keep down, by the bottom of the valley. Otherwise the track crosses the slopes of Srednji vrh and Vrh nad Gracijo and with a few final turns reaches Bogatinsko sedlo, 1803 m. Great panorama on Krn group opens there. From the saddle we continue northwards. The ridge over Vrh nad Gracijo to Lanževica is broad and easy. Ascent altogether: 2 h 30 min. 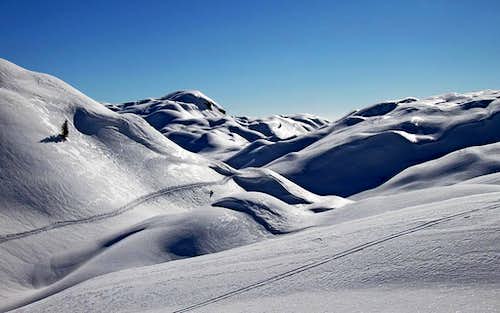 2. Lanževica Over Lepa Komna. This is a very nice, easy tour over a wonderful plateau. At Koča pod Bogatinom you deter right from the main track and ascend a distinct saddle in the NW directen. Then you continue crossing Lepa Komna on the altitude of some 1600 m. When reaching Poljanica meadow, you turn left and start ascending towards the SW. The track aims the saddle between Vrh nad Gracijo and Lanževica, but usually just before reaching it, turns right, crosses the gentle eastern slopes of Lanževica and then ascends the summit by the north ridge. 2 h 30 min. From Lanževica it is also possible to ski down by the north ridge and then descend on Poljanica from Oslova škrbina (saddle).

Komna is part of the Triglav National Parc.

In snow-free times, the best hiking season is mountain spring, which is on Komna plateau in June and start of July. After this period weather stabilizes, but the best time to hike is may be not high summer, but autumn, till the end of October. But if you are able to come with skis, Komna plateau will offer you the most - the best months are from February till first half of May (if winter is rich enough with snow).

Camps: There's a nice camp in Bohinj valley (by the lake) and also one in Lepena valley.