Back to the Southern Wasatch

The weather forecast showed one last weekend of warm temperatures before the first big cold front of the fall moved in, and with snow on the way in just a few days, it seemed like a good time to get in one last summer/fall hike. It looked like a prior commitment might prevent me from hiking Mount Nebo with James, a friend from work, but when that fell through I was good to go. I wasn’t sure if James was still going to do the hike, so I invited my brother Chris to come, since he had enjoyed his first big mountain hike of Mount Sneffels a month earlier in Colorado. 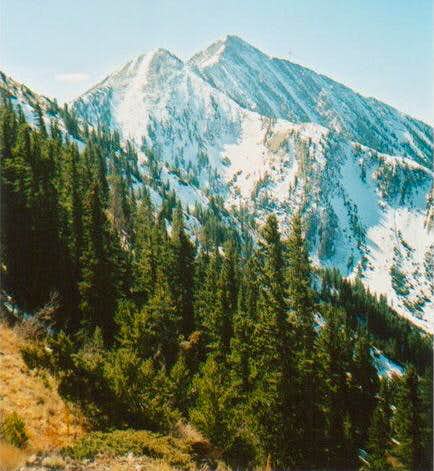 Despite almost always preferring new mountain locations over places I’ve already been, Mount Nebo was one of a handful of mountains in the Wasatch that I wanted to do again. The first time I tried it with my best friend Gabe, we didn’t do enough research on the north trailhead location and ended up bushwhacking up and down the ravines on the east side of the mountain (followed a cow trail splitting off from the Nebo Bench trail instead of continuing along Mona Pole Road from the paved parking lot to the main trail), so after finally finding the right trail we were too exhausted to keep going. At the time it was my first failed summit attempt (8/24/05), so anxious for redemption I came back a couple months later and solo-climbed it in the snow (10/15/05). That was back when I was naïve enough to not even take an ice axe even though the conditions warranted it, so even though this time there would be less drama involved, I was looking forward to seeing the fall colors on the Nebo Scenic Byway and returning to the area with my new digital camera (instead of the cheap film camera I had the first time).

Mount Nebo (Without the Snow) 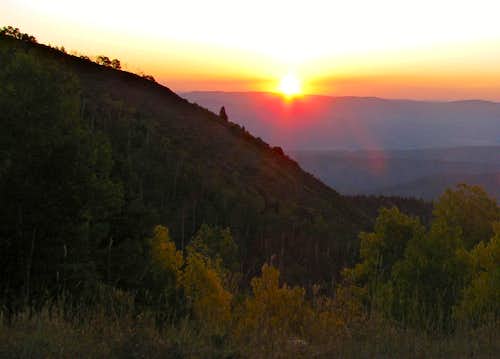 Sunrise on the Nebo Scenic Byway
I left the Salt Lake area around 5:30, swung by my brother’s place in Provo at 6:00, and we picked up his friend Chantel at the McDonald’s in Payson at 6:30. The drive up the Nebo Scenic Byway to the trail head was a bit slow due to cows crossing the road in a few places, but the fall colors looked really nice in the early morning light. 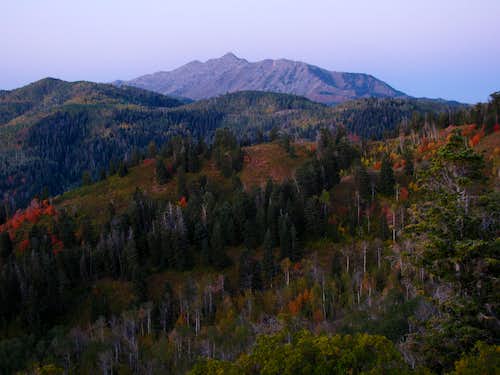 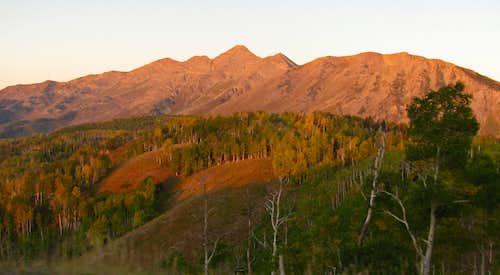 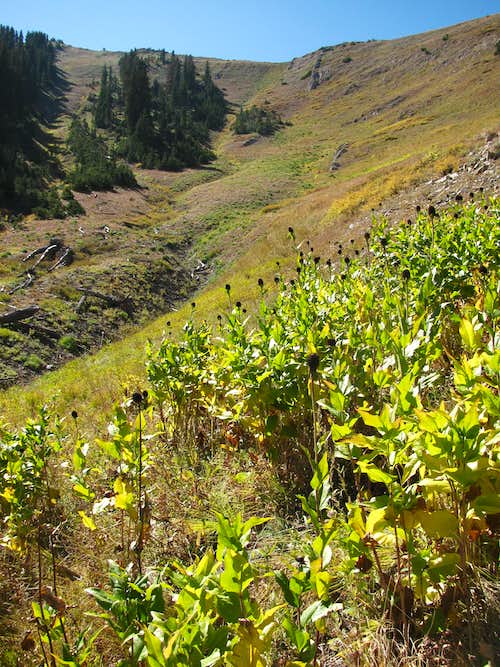 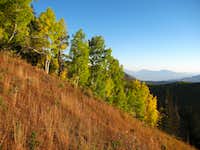 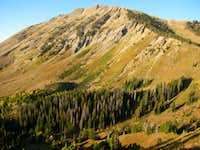 North Peak
Chris left his car in the parking lot, and he and Chantel hopped into the Explorer for the short 0.3 mile trip along the dirt road to the trailhead (even though it’s not that rough and definitely doable for a passenger car). This was Chantel’s first big hike, but she was keeping pace just fine at the beginning of the hike. From what I remembered, it seemed like there were 5 main segments to the north ridge hike. I’m not sure if each one is a mile or not, but I like separating the segments into the part that follows the barbed-wire fence towards the trees below the north ridge of North Peak, the part that goes through the wooded part below North Peak and up to the ridge where you get your first view looking down on I-15 and the town of Mona, the trail that gains and then loses elevation leading to Wolf Pass, the steep ascent from Wolf Pass up to the false summit at around 11,500 feet, and the part that traverses the ridge leading to the summit. 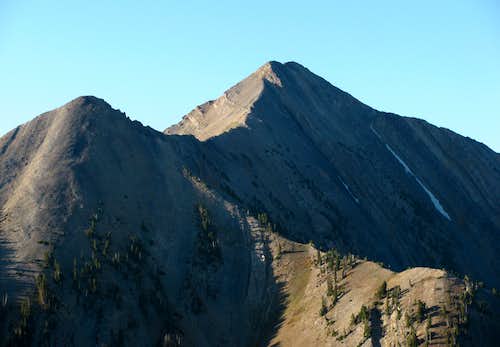 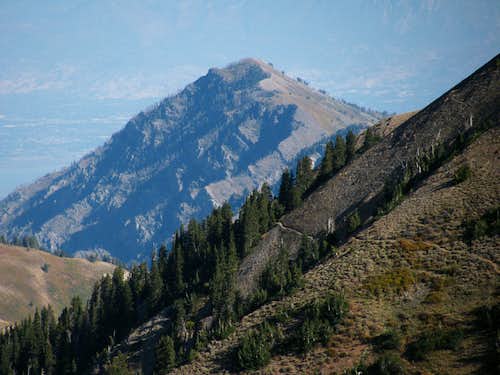 Upon getting to the second part of the ascent where the trail steepens considerably, Chantel began feeling the effects of the altitude and I wondered if we had been going too fast for her at the beginning. We played leapfrog with another group consisting of a dad and his daughters, and after chatting with him I learned that like me, it had been awhile since he had been to the top as well. The trail cut across a steep meadow (my first time up, the trail was covered in snow so I just went straight up the steepest part) and then switch-backed up through a cluster of trees to the west. We took a long break at the ridge looking down towards Mona, and Chantel couldn’t believe she was over 6,000 feet above the town, somewhere she thought she’d never be. It’s always fun seeing first-time hikers’ reactions when they try something they never thought they could do. 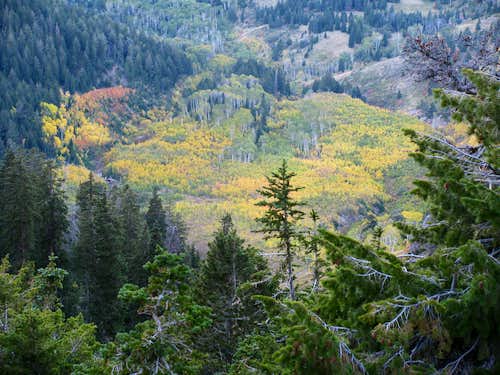 Fall yellows down below 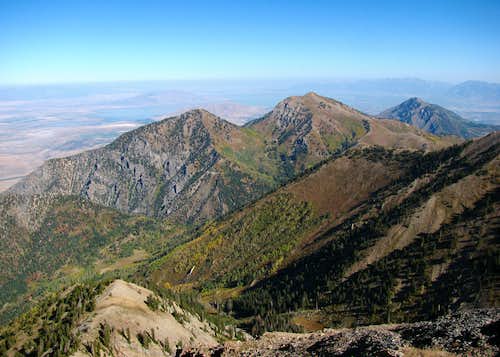 Looking north from the north ridge 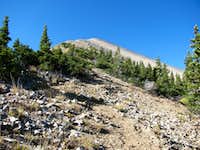 The sun was low enough that the third part of the hike leading to Wolf Pass was still shaded by North Peak, and the easy trail seemed quite different from when I had climbed Nebo in the snow four years earlier (it was actually the one spot I thought about turning back, since the shady snow-slopes were icy and slick and a fall would have sent me well on my way down the west side of the mountain). We took another snack break at Wolf Pass, and we encouraged Chantel to keep going. I increased my speed going up the fourth section to see if she could go any faster, but her energy was starting to run out. Upon catching a glimpse of the remaining fifth of the hike from the sub-peak at around 11,500 feet she said she was done, so she and Chris agreed to wait there while I continued on. 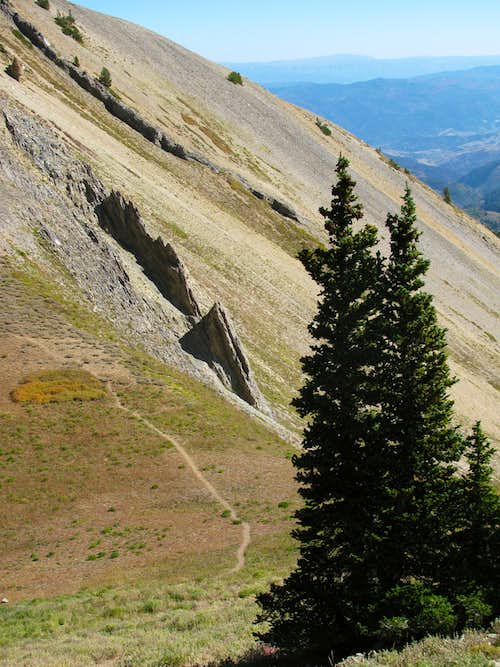 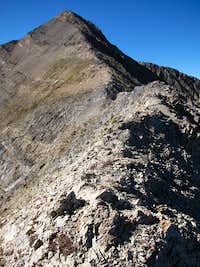 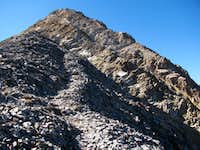 The ridge leading up to the summit of Mount Nebo is my favorite part. Although there aren’t really any spots that could be considered scrambling (the only time I had to use my hands was around the loose scree just below the northeast side of the summit), there is some nice exposure on both sides, and instead of taking the trails that come and go mostly on the west side of the ridge, I opted to go straight over the sharp rocks on top of the ridge itself. At the summit, which rises over 7,500 feet above the valley below to the west, I saw a cardboard sign and summit register, and even though I’ve never bothered to fill one out in the past I decided to do it for fun this time. 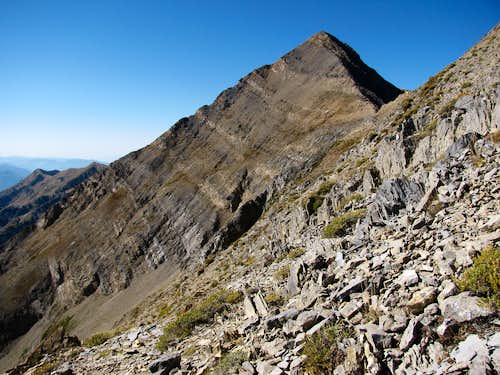 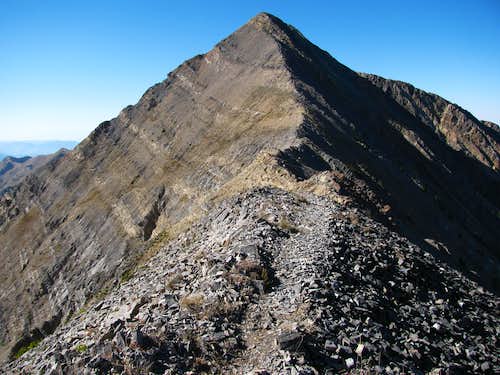 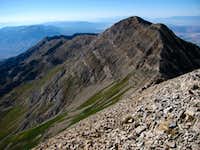 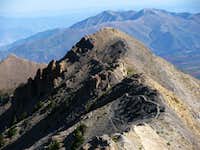 Sub-peak to the north

Soon after heading back down, I passed several people (a couple with dogs who surprisingly seemed to be handling the steep terrain just fine) on their way up. One of them was my friend James from work. Neither of us knew that the other was still doing the hike, so it was funny that we ran into each other. After taking a few pictures, I asked him to let me know if he found a green rechargeable battery at the top (which I just realized must have come out of the front pocket of my camera case, which I accidentally left unzipped), and fortunately for me he found it and was able to return it to me a few days later at work. I returned to the small peak where Chris and Chantel were waiting, and we then made our way down the mountain. 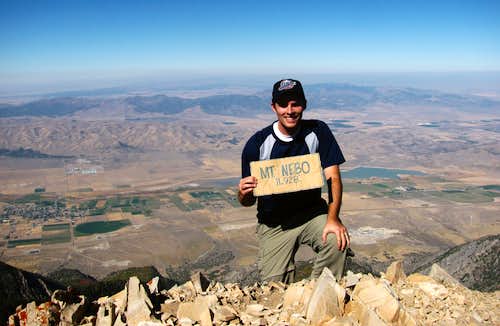 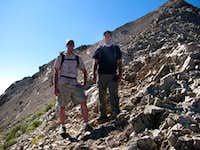 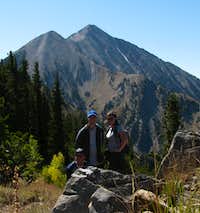 
From near the top we could see the parking lot to the northeast which was our final destination, but going down seemed harder this time than I remembered. Part of that could be attributed to the fact that I was in better shape the first time around and this time it was actually hot on the way down (no clouds and not much wind, with temps around 89 degrees in the valleys below), but the hike still took six hours, which is the same time it took me the first time in the snow. 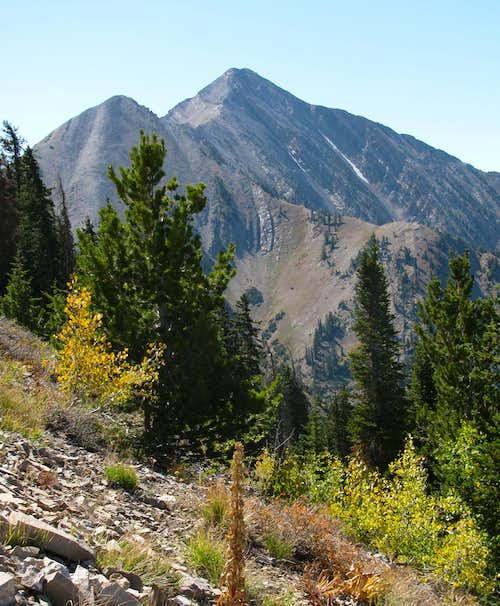 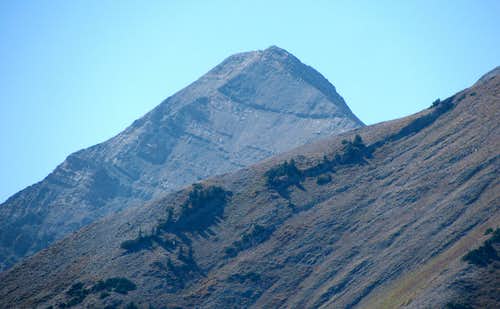 Mount Nebo summit cone from near the north route trailhead 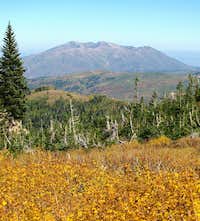 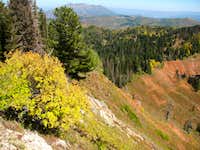 Although the views aren’t quite as good as those found in the central Wasatch, Nebo is an impressive mountain that every hiker in the Wasatch Front should try at least once, especially since it’s actually one of the easiest 11ers to summit. It was good to finally get back down to the southern Wasatch again, and I’m sure I’ll be back again in the future. 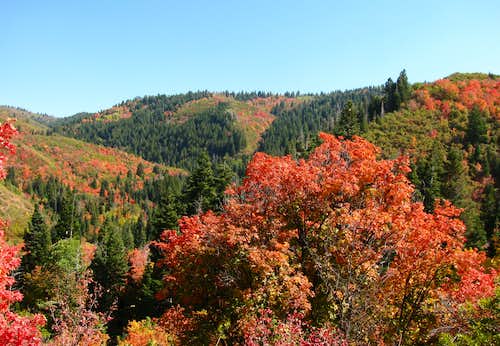 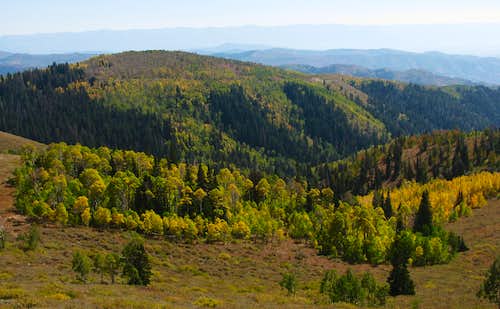 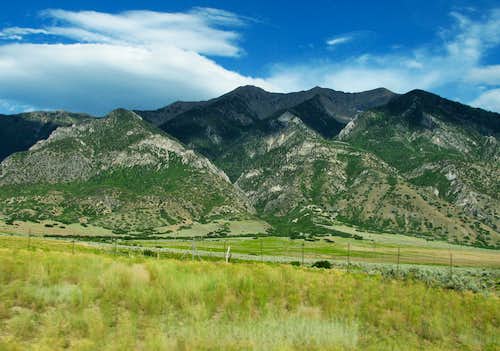 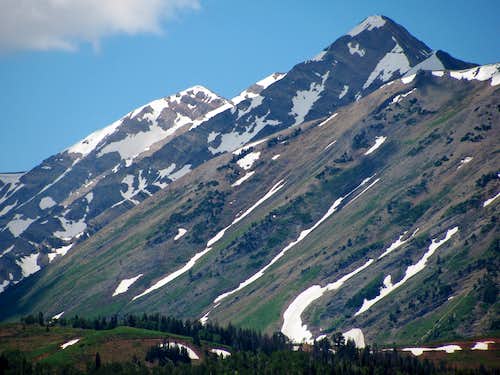 ... and from the Nebo Scenic Byway.

Way to get out there and get it done. Try not to think of that day as the last of the season. It aint over till the fat lady sings. HAPPY TRAILS out there.

I'd also like to think that the hikes don't have to stop when conditions aren't perfect. Those ones usually end up being more memorable, anyways.

Nice job! I recall my brother and I doing Nebo in late summer of
1983. It was an easy slog to the summit via Andrews Ridge, but
that was after we had to spend the night in our vehicle due to a
late summer flash-flooding episode.

From the pictures I've seen of that route, it looks like there's some fun scrambling in between the north and south summits. I'll have to try Nebo that way the next time I'm down there.