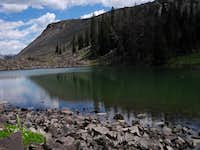 Massive Lava Mountain is easily seen from many places along U.S. 26/287 between Dubois and Togwotee Pass, and it is easily seen from many summits in the area. Far from being the most dramatic peak in the area, its size and dark-looking aspect nevertheless will interest climbers who like to discover the character and the secrets of a mountain. The name refers to the dark volcanic rock that makes up most of the exposed rock on the mountain, and that rock is cooled lava from ancient eruptions and flows.

By most accounts, the southern end of the Absaroka Range is at Togwotee Pass and the northern end of the Wind River Range is at Union Pass. If so, this "strands" a group of peaks-- Two Ocean Mountain, Pilot Knob, Lava Mountain, and Fish Lake Mountain-- between ranges. Where do they belong?

In Guide to the Wyoming Mountains and Wilderness Areas by Orrin and Lorraine Bonney, these mountains are in the chapter for the Wind River Range. However, they are much more like Absaroka peaks, especially the closer to Togwotee Pass the peak is (disclosure-- I know nothing about Fish Lake Mountain). The summit ridge of Two Ocean Mountain, only about a mile south of the pass, consists of the breccia that characterizes so much of the Absarokas. Tiny Pilot Knob, the next peak south, does not consist of breccia but does have dark, exposed volcanic rock and the jagged ridge features common in the southern Absarokas. Lava Mountain has huge amounts of exposed lava, making it resemble the volcanic Absarokas much more than it does the Winds (volcanism did play a part in the history of the Winds, but the range is not nearly so characterized by it as the Absarokas are).

Thus, those peaks are grouped with the Absarokas here on SummitPost. 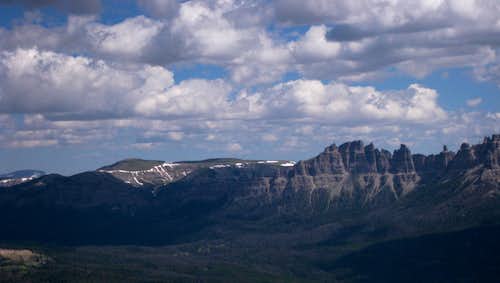 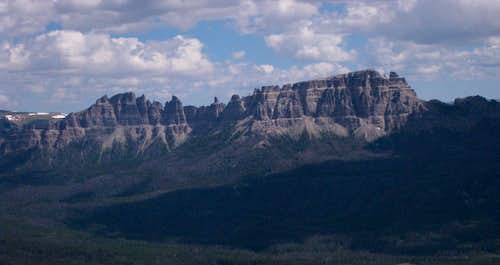 Getting There via FR 537

Not far west of the turnoff for Brooks Lake on U.S. 26/287 (this is 20-25 miles from Dubois), turn west onto FR 537, an unimproved road that when dry should be passable for most vehicles. In 2011, there was no sign, and I am assuming the road construction that went on out here for several years obliterated it, but it is easy to see. Another thing to look for is a bridged stream crossing that occurs almost immediately and is clearly visible from the highway.

In 2.7 mi, FR 537 is gated at the Continental Divide (9246') and the boundary line of Shoshone and Teton National Forests.

In theory, this route is simple: follow the Continental Divide to the summit. The reality is a little more complicated. Most of the first half of the route is a bushwhack; sometimes the trees are high and dense enough that you cannot tell for sure if you are going in the right direction, and this is complicated by the fact that the Divide here is often quite broad and not obviously defined, making it easier to get off course. You shouldn't get lost, but you might end up making more work for yourself.

Something that helps for a bit is that there is a fence marking the Divide. That not only points the way but also offers a trail at times and clearer terrain as well.

Eventually, things open up at about 9800' at a vast boulder field of dark volcanic rock. You can skirt the boulders by sticking to the ridge of the Divide, or you can trim a little distance and have a little fun by ascending the boulder field to the mountain's summit plateau. Once up there head east across meadows and through lightly forested spots to reach the highpoint. You may notice and pass a couple of tarns near the summit.

This route climbs approximately 2200', with not much in the way of notable ups and downs, in about 3.3 mi. Nothing harder than Class 2 is necessary.

The USGS Lava Mountain quad shows a trail going from road's end at the Divide to a cabin at about 9160'. This trail seems to exist only in fragments, but with the map, it is not hard to find the cabin. The approach is mostly through meadows, but they are sometimes marshy, and there are some easy stream crossings. Start out by hiking along a 4wd track (marked as the trail on the quad) next to a pond (unmarked on the quad).

I did not see any signs indicating the cabin is private property, but there was evidence that it receives use. It could use some fixing up, but it is not in a complete state of disrepair. Perhaps it is a relic used today by campers, hunters, and anglers. Or perhaps some hermit lives there. I took a picture (seen below) but did not get close enough to investigate.

From the cabin, head southeast to a fork in the stream here. Stay southeast at the fork and follow that drainage, eventually turning almost due south. Soon, the terrain steepens and becomes a boulder field.

Now there are two options. Head east for the steep end of the mountain's north ridge. Scramble to the top, hike over Point 10,126, and then continue south to the summit. Or, head south across the boulder field until you reach a small, pretty lake. Head east to the north ridge and then scramble up the west face of it to reach the top and then continue south to the summit. This is the option I used, though it was my descent route. It was more work than descending the north ridge all the way would have been, but it was worth it to check out the lake.

This route also climbs approximately 2200', but with a bit more of the ups and downs than the other one has. The one-way distance is about 3.2 mi. In my opinion, it is a better route-- easier and more scenic-- than the Continental Divide option. And there is very little forest bushwhacking. With care, one can keep this route no harder than Class 3.

Or use both for variety and a better tour of the mountain. 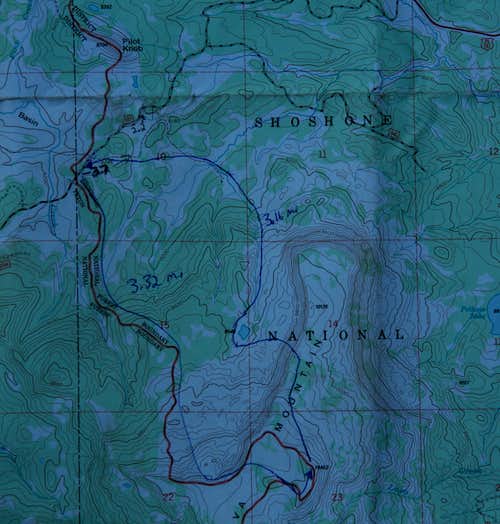 Getting There and Climbing via Pelham Lake

Closer to Dubois and just east of the Tie Hack Historical Monument along U.S. 26/287, FR 540, an improved dirt road, heads northwest to Pelham Lake; the very last part, not even half a mile, is marked as a 4wd road.

From Pelham Lake at 8817', one could bushwhack about a mile west and then scramble up the cliffs to the top of Lava Mountain's north ridge. That scrambling could pose difficulties, but the steepness (on maps) is about the same as on the west side of the ridge, where I was able to find scrambling routes.

Note-- my description of this possible route is based not on personal experience but by looking at maps, one of which is the Shoshone National Forest map I have had since 2000. I do not know current conditions or even whether the road is still open. You are advised to contact the Wind River Ranger District (in Dubois) at 307-455-2466 for up-to-date information.


Getting There and Climbing Via Sheridan Creek

I've been told this route is popular with snowmobilers. It is much longer than any of the other routes described here, but the elevation gain is the same as those beginning from FR 537. The advantage of it is that, and this is based on looking at maps, not personal experience with the route, there is very little bushwhacking because almost all of the route passes through meadows.

Maps show a 4wd road accessing a trail that climbs almost to the source of Sheridan Creek. Then one would gain the Continental Divide and follow the ridges northeast to the summit of Lava Mountain. It appears that the 4wd road can be accessed via the turnoff near the Tie Hack site mentioned in the previous section, but again, I have no personal experience with this route or the driving approach.

It's grizzly country, so carry pepper spray and be knowledgeable about proper etiquette.

Dispersed camping is widely available. Not far east on 26/287 is the Falls CG, operated by the Forest Service. There are two campgrounds by stunningly beautiful Brooks Lake (about 10 road miles from Pilot Knob), but they are small and popular and often fill by early afternoon.