On this page I would like to give an overview information of Lavanttal Alps group in order not to be repeated on all distinct summit pages, which may possibly appear in future. Regarding pictures and routes, this page is the place only for overall information.

On the east the border of the long arc of European Alps is approximately the line: Wien - Graz - Maribor. Beyond it there are some more hills and then the big Panonian flat begins. South of Mur river, and north of Drau river there is a broad area, where mountains still exceed 2000 meters. While the western part of this area is often referred as Gurktal Alps or (on their very western part) Nockberge, east of Gurk and Olsa river there are some mountain groups which are sometimes referred as Lavanttal Alps. The valley of Lavant creek is indeed in their center. Also mountains of Lavanttal Alps exceed 2000 meters. But their nature is quite different of the nature of other groups in neighbourhood. The group is formed of a few huge mountain shoulders, streching over distances of some 35 to 45 kilometers. So, east of Lavant valley there are two such shoulders, both going in a south-north direction: some 35 km long Seetaler Alpen and south of it Saualpe of the same length. Both ranges are divided by a saddle, named Klippitztoerl, 1644 m. In Seetaler Alpen also Zirbitzkogel, 2396 m, the highest summit of the whole Lavanttal Group stands. East of Lavant valley there are Koralpe on south and Packalpe on north, divided by Packsattel, 1169 m. Over this saddle also the highway Klagenfurt - Graz goes, using some tunnels. Finally, on the very NE part, actually in the big corner of Mur river there are Glein Alpe, which do not exceed 2000 meters any more, but also strech for some 45 kilometers. 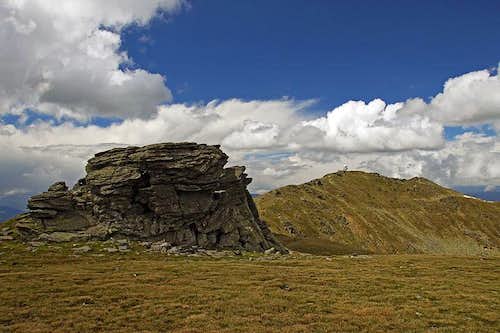 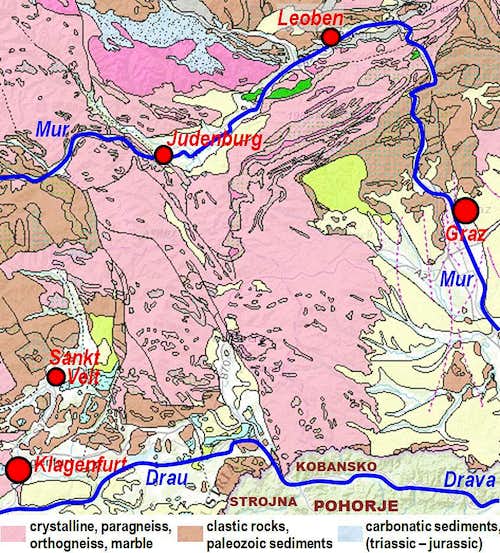 The geology of Lavanttal Alps is as simple as the one of Gurktal Alps. We also see that on the west the geological border between the two groups is not existing. The same types of rocks simply continue across both. So let me just repeat the sentences from the page of Gurktal Alps: "The map on the right illustrates the quite simple geological structure of Lavanttal Alps. The pink areas denote the old metamorphic basement of Austroalpine mountains. Various paleozoic rocks were in millions of years transformed by pressure and temperature. Also the brown part of Lavanttal Alps is very old by origin. Those are various paleozoic rocks, which were in millions of years fragmented, decomposed and piled to various levels of thickness. Only on a few small areas some younger (mezzozoic) carbonatic rocks can be found (blue). In the valleys and basins the white areas are alluvial morraines and river debris or parts of molasse.

However, what must be mentioned, is the fact that across the border between Austria and Slovenia there are also three mountain groups which geologically belong to the Lavanttal Alps. They are continuation of Saualpe (the hills of Strojna) and of Koralpe (the hills of Kobansko and the massif of Pohorje). Even if most of mountain classifications treat them separately, we'll include them into the big group of Lavanttal Alps.

Subgroups With Some Main Summits 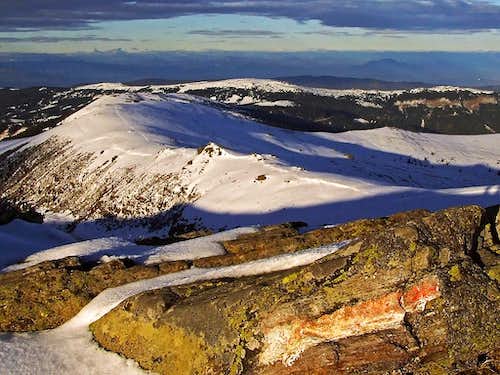 The general feeling in these mountains is, how wide and open they are. Nothing is stopping our view, except skylines of their gentle ridges. In lower and medium parts there are still many woods, although the landscape is very exploited by farmers. Summits are all grassy, offering great long-distance views. On these mountains you will not find much rock formations. Regarding outdoor activities, Lavanttal Alps are a paradise for easy hiking, tour skiing and mountain biking. Long mountain shouldes call for long-distance crossings by their nature. And they can be done with or without skis. As the area is well developed, towards summits many roads ascend. Using them is only a matter of a good map. Roads can be important as despite relatively low absolute altitude, relative altitudes can be still quite considerable. Doing 2000 altitude meters in a distance of 15 kilometers can require some endurance.

Klagenfurt and Graz are connected by a highway, which crosses the group. Also from Graz towards north and north-west highways go, the latter one is known as Pyhrn Autobahn and is connecting the area with Central Europe. From east the highway also reaches Judenburg in Mur valley. And, as seen on the map, good roads are also going through all main valleys and over all main passes. Through Mur valley, Drau valley, Lavant valley and Gurk/Olsa valley also railways go. On web, you can see a detailed map on: http://www.austrianmap.at/.

In the whole area there are no restrictions. Highways in Austria need to be paid, all other mountain passes are toll free. Below, see a few excellent pictures from SzaniUherkovich.

You can climb Lavanttal Alps in any season. For weather conditions for Austria see here (then choose regions: Steiermark and Kaernten). Avalanche info pages are the following: For Steiermark, For Kaernten.

All surrounding valleys are well developed for tourism. You can stay there in many hotels and some camping places. Lavanttal Alps are also quite well covered with mountain huts - too many to list them all here. They will have to be named on every separate summit page. Among towns around Lavanttal Alps I have found the following ones with web pages: Klagenfurt, Althofen, Judenburg, Knittelfeld, Leoben, Murau, Bruck an der Mur, Graz, Wolfsberg, Lavamuend, Dravograd.