I was enjoying dinner with my friend Michael Covington (the man who lives in a tipi) at my home in western Colorado, and we were interrupted by his phone buzzing. The phone call was Layton Kor is dead, and the day was April 21st of this year. I never met Layton, but knew his name really well. Michael was not surprised, it was expected since Layton was suffering from kidney failure and prostate cancer. Michael has met Layton in Yosemity in 60s where they climbed together, and later on in Colorado.

His Life and His Endless Energy

Layton Kor
Layton Kor was one of America’s greatest and most revered climbers. He came from a small town in Minnesota, born in 1938, and was a bricklayer by trade. He taught himself to climb by chopping steps with pickaxe up a clay embankment in Texas: “I’d seen the climbers in the movie with ice axes and I thought that as the way it was done”, he wrote.

In the mid 50s, Kor’s parents relocated to Boulder, where the area is abundant with rocks. He put up many routes here as a teenager, especially Eldorado Canyon, Boulder Canyon, the Flatirons and Lumpy Ridge.

By the late 1950s and mid 1960s Kor ecomplished many first ascents, including  The Naked Edge, Ruper and Yellow Spur in Eldorado, the West Face of El Capitan, the South Face of Washington Column in Yosemite, the Yellow Wall on the Diamond (Longs Peak), the Cruise in the Black Canyon of the Gunnison, and Proboscis in the Yukon. Layton was also the driving force in opening up the American desert with first ascents of Castleton Tower, the Titan, Monster Tower, and Standing Rock in Utah, and Fast Draw and Bell Tower in Colorado National Monument.  The exact number of routes he pioneered is unknown, but it goes into hundreds. Jim Bridwell named his child after him. Original Kor pitons are still discovered today on obscure crags throughout Colorado.

Kor-Ingalls route on Castleton Tower and Finger of Fate on the Titan are both featured in the book Fifty Classic Climbs of North America.

Kor was six feet and five inches tall, he was dominating in climbing, in stature, and in the amount of energy. Kor was a “relentless dynamo of energy”, said Royal Robbins. Click here to see tall Layton Kor standing next to Lynn Hill, it shows his height really well. 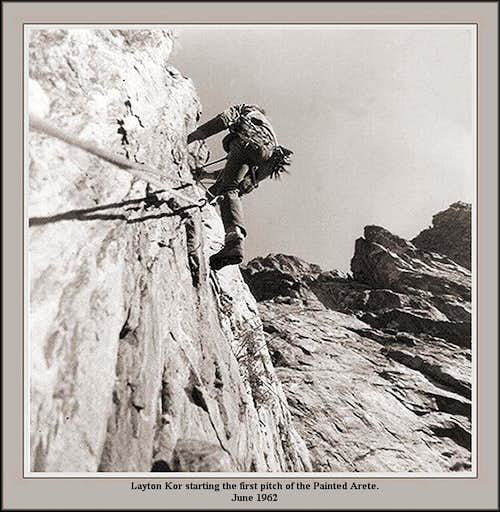 Layton Kor starting the first pitch on the first ascent of the Painted Arete, June 1962.
Pat Ament:”Overall, he was absolutely the most fun person you can imagine to be with. Full of energy, and just loved go out and climb everything in sight. He had a wonderful sense of humor. He also scared us to death a lot of times, because he could be wild and reckless.”

Kor’s technical skills and accomplishments gained him international fame, and in 1966 he joined an elite team of alpinists that included Dougal Haston, Chris Bonington and John Harlin, to attempt a direct line on the North Face of the Eiger. On that route, Kor pioneered a key rock traverse, but two thirds on the way up the face, a fixed rope Harlin was jumaring cut, and he fell to his death. Kor, with Bonington, found Harlin at the foot of the face where they sat sobbing in the snow. (The route is now called Harlin Directissima).

Disappointed Kor turned his abundant energies toward other big lines in the Alps, tacking the North Face of the Cima Grande and the icy North Face of Les Courtes.

In 1967 Kor returned to his home in Colorado where he joined Wayne Goss and Bob Culp for the first ascent of the Diamond, the second ascend of Salathe, which was Kor’s last major climb. Kor became Jehovah’s Wittness, finding that religion “provided a far more meaningful outlet for energies that had ten years of extreme climbing”. A father of two, Kor wrote in his autobiography “Beyond Vertical” that it would be irresponsible to put his life on the line in pursuit of extreme climbing at his family expense.

“Frankly, most of us were a little peeved when Layton choose God over climbing”, wrote Royal Robbins. “We...regarded such a defection as a sign of weakness”.

Kor however did not quit completely, he continued to climb as time allowed, though at a moderate and saner level. As recently as 2009 he made the first ascent of a 150 foot desert tower in Arizona, near his home in Kingman. His poor health and a kidney transplant kept him close to home. He was 74, just two months shy of his 75th birthday. His lengthy illness generated significant medical expenses, many of which were not covered by insurance. Kor essentially died in poverty.


Cameron Burns, who is writing a biography on Kor, said: “If Layton got a nickel for every person who ever climbed one of his routes, he’d have been a wealthy man.”

Everyone who met Layton, read his writings or climbed his routes, holds him in a special, reverent place. He was one of the great personalities and legends of our sport and a gracious and bright spirit to the end. From support for Layton Kor website

We, as climbers come from different backgrounds, some are dirtbag climbers, and some  trying to find balance between work, family, and climbing. Some climb for a short time of our life span, and some cannot leave this sport. I see the photo of Fred Beckey holding a sign in my mind - "Will Belay for Food". For some climbing is such a passion, that it takes over everything else in their life. And we are all united in our love for rock.

If you wish to donate to Layton’s wife Karen to help with covering some of his medical expenses, use this link

If you will be in Boulder area June 21-22, there will be event Diamond Reflection 1959-667 Remembering Layton Kor. My friend Michael Covington is included on the list of speakers.

Re: A fitting tribute...

thanks for reading it:). I thought we should mention him since many of us climb his routes.

...Liba about a great climber i didn't know.
Thanks!
Silvia

Thanks Silvia,
Layton was like a dynamo and established many new routes all over US.

The first photo on page

Taken by Galen Rowell of Layton topping out on an El Cap 1st ascent back in the day. It was a Kodak Brownie snapshot if I'm correct.

Re: The first photo on page

yes, by Gallen Rowell - signature of the photographer on the side of the photo. I don't know how it was taken. Thanks.

Great tribute to a giant.

Thanks for posting this! --- Yvette

Re: Great tribute to a giant.

Thanks Yvette... I was thinking it would be nice to have something written about him on SP, but did not spend too much time on the project...

Nicely written, Liba. I've admired "Layton the Great 'Un" (as Chris Jones refers to him in "Climbing In North America") since reading about his role in ascending the Harlan Direttissima many years ago. Your article had a lot of interesting facts about the man that I never knew. Thanks for writing this.
-Gordon

thank you Gordon. I thought we should have some tribute to him on SP...

Layton on the Harlin diretissima - Eiger

Layton impressed all his companions on the John Harlin Diretissima of the Eiger. Chris Bonington stated of him during this ascent: on normal grounds, clumsy and gangling, he had difficulties to control the members of his immense body. But on rock, he became himself... the delicate and precise way he was moving was a pleasure for the eye, for a man so tall, his weight power ratio was excellent. He was so much better than everyone else on critical aided pitches that they left to Layton the task to overtake the most difficulties aided parts of the climb and particularly a key traverse, on which Chris said that for Layton nothing was impossible, no one but Layton could have done it without the use of bolts, a true artist made for this type of highly specialised climbing. But following him was not easy as there was so much space in between his pegs!

Yes, Layton quite an admired climber and rightly so.

Re: Layton on the Harlin diretissima - Eiger

thank you so much... I just heard how much energy this man possessed!!!

Sad to see that he struggled the last few years of his life, and his family has a hard time covering his medical bills. I guess climbers...:)