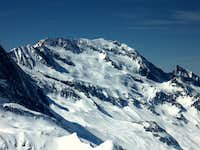 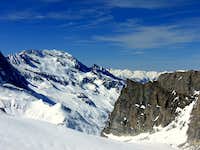 Famous Neighbours..
It is one of the few mountains in the Vanoise Range that is visible from the Tignes, La Plagne and La Motte areas. More important:It is a mountain with one of the most diverse and impressive faces of the Vanoise Range. It is….. Pointe du Grand Bec!

Pointe du Grand Bec (or more often just called Le Grand Bec) is a fine shaped mountain located in the Vanoise Range, which is part of the French Alps. It is a mountain of many views: The North Flank is heavy glaciated whilst the West and South faces consist of (near) vertical walls that are waiting to get challenged by experienced climbers. The variety of faces makes it that this mountain offers a variety of climbs. The North Flank is a perfect destination for ski- ascents, while the North-West ridge and South Face offer more technical climbs to the summit.

Grand Bec is with its 3398m of height one of the major peaks in the Vanoise Range. It shares this title together with its higher neighbours like La Grande Casse (3854m) and La Grande Motte (3656m). The normal Route via the North Flank is graded PD- for normal ascents and 3.2 for ski ascents. It is a nice and straightforward climb where you should only be aware of big crevasses that are present on the North Flanks Troquairou glacier.

Summit views are superb with amazing views of the nearby Grande Casse (3854m), Mont Pourri(3779m) and Bellecote (3410m) massifs towards the North and North-West. Towards the East other major mountains like Aiguille du Peclet(3570m) and Albaron di Savoia are in sight. Last but not least; views towards the west offers great views over the French lowlands. To conclude with: Le Grand Bec is a fine peak that has something to offer for everyone!

To Plan des Gouilles
The route starts at the Refuge du plan du Bois (1475m).(see How to get there section) From here a marked trail leads to the Plan des Gouille mountain Hut at an altitude of 2350m. The trail is still very well visible at this point and leads further upward to Cotes Vertes at 2590m. At this point the trail gets more difficult. You will find your way up to the Col de la Becquetta at 2828m.

In this part some snow may already be present, even in the summer months. After reaching the coll it is advised to use crampons since the large Troquairou glacier needs to be crossed. The crossing of the glacier is fairly easy in most parts. It involves some steeper parts up to 35° and you have to watch out for big crevasses which are present on the way up. To minimise the change of coming along these big crevasses it is advised to acent via the right side of the glacier.

Ascending on the glacier will lead you all the way up to the summit of La Grand Bec at an altitude that just fails 2 meters of the 3400 meter barrier. Descending is the same way back. This tour is also very recommended as ski-tour. From the summit you can descend all the way down towards Laisonnay or Chamagny Haut (of course depending of current snow conditions)

Clear view of the North-West Ridge
Another option for a route is via the North-West ridge. This route is lesser climbed than the Normal Route but is also more challenging. The route starts in Chamberanger (La Rochette) at an altitude of 1490m. A trail leads up to 'Plan Fournier' at 1910m. From here a marked trail leads on to the Grand Bec mountain Hut at 2410m.

For the North-West ridge Route:

For the North Face (Normal) Route:

For ANOTHER map guiding the above Routes follow THIS LINK 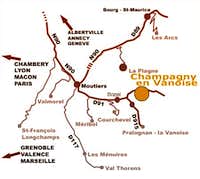 Hotel:
Multiple Hotels in and around Champagny 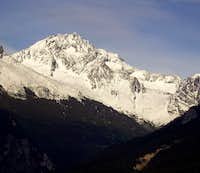 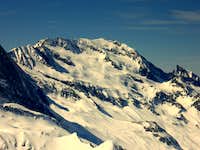 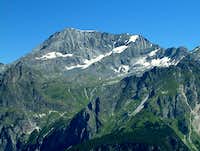