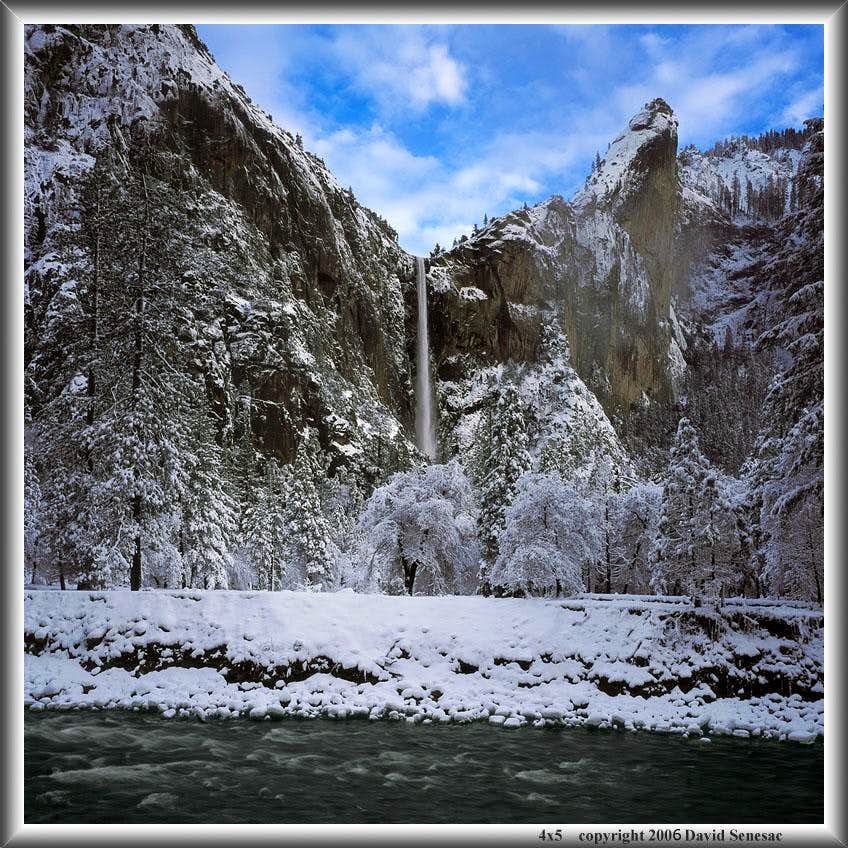 ...mouse click to enlarge... In 2006 I expected to send in the above transparency for a drum scan but that hasn't happened yet. So recently used my cruddy flatbed for a crude scan then post processed it for a close match to the transparency per my natural style. Provia 100F 4x5 transparency through my 150mm Nikkor lens on March 3, 2006 after an epic 20+ inch daytime snowfall. Although the area behind Bridalveil Fall was partly cloud and blue sky, it was mostly cloudy directly above this position. There is a thin misty cloud rising up the cliff face in front of Leaning Tower that I wasn't sure about at the time as it is somewhat distracting, not looking like a cloud unless taking out my loupe where the fine variations of the mist becomes apparent. Millions of tourists have looked at this major tourist view icon and a major aesthetic limitation is the far Merced River bank though natural is quite ugly looking like an open construction scar. Thus the usual tactic for photographers from this locale is to go more tele and remove the bank and river below. That can result in a reasonable image though the result tends to lose the overall feeling of the setting. Capturing the scene right after an unusually cold snowstorm that covers it up with white is about the only viable strategy for a normal or wide angle frame. Even then the resulting horizontal geometry is hardly a plus. And one cannot simply move to another location to shoot because this small zone is the only spot with an unblocked by the usual trees view. Here I cropped out most of the river width so at least the remaining dark river band was similar in height to the bright snow band. One might of course crop more pano removing both the river and the bank, but that results in a mediocre overall geometry putting the fall dead center instead of at two-thirds. Although most might of course manipulate the snow band dimming it more, for sake of my natural style, I preferred to leave it at the aprroximate brightness rendered by the film. Just as with the mist against Leaning Tower the snow band has a more interesting character when actually viewing the fine detail on either the transparency or the above processed 5200x5200 pixel processed full scan. On my below website homepage, the image can be found on my Gallery B sub-page gallery. David Senesac http://www.davidsenesac.com
« PREV NEXT »