During the entire summer season of 2012 I was "entertaining myself" on the slopes of the Lenin Peak. I installed high-altitude camps, lead clients to the top, worked as a porter, participated in rescue operations, etc. I experienced the working days of all mountain specialties, except, perhaps, the kitchen; I managed to avoid this, of course, noble labor sphere of activity. 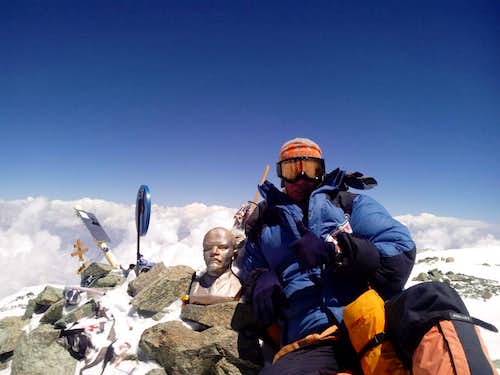 The season turned out to be very long, full of events and meetings, cognitive and interesting. I met with mountain lovers from all over the world, saw their tactical techniques when wandering up and down this beautiful mountain. Not all attempts to ascend were successful; most climbers did not reach the summit. Someone interfered with the weather, someone’s health did not allow it, someone did not have enough training, desire, and some - sobriety.
They also climbed to the top in different ways: someone reached the summit easily and freely, and also descended without any problems, and someone reached
almost completely tired and went downstairs only squeezing their will like a lemon and drying their body like a prune. I am writing this article to consider
the reasons for attempts of ascents, in which people did not reach the summit. Although I think any ascent – if one climbed to the top or not – successful, if
he safely came down the mountain. Alive and healthy, with unbroken limbs, without irreparable consequences for one's health. Those who go to the mountains with the motto "summit or death" are strongly not right. The mountains stood millions of years before our birth and will stand still as much. "It is better to return a hundred times than to stay one time".

Let's consider some results of events on an ascent:

• One did not reach the summit, became sad, went home;

• One heroically ascended, slid down on the edge of his possibilities;

• One climbed to the top, went down calmly. After the descent, one felt
fine, having a reserve of strength.

There is no sense to consider the third option - the winners are not judged. If the climber did it that way then he did everything right, proceeding from his opinions on mountaineering, and what style he did and by what tactics – this is the theme of another article.

The second option is not bad and also has the right to exist. The ideal, as we know, is unattainable, although it is necessary to try to reach it.

Why cannot people climb up to the top? There are several basic excuses. This is a bad weather, poor route condition, poor health of climbers (illness), poor physical training of a climber, poor equipment of a climber. Everything is right at first glance, but in fact the main reason for not reaching the top is in the person himself!


So, what was said as the reason for refusing to climb in the summer season of 2012 on the slopes of the Lenin peak: 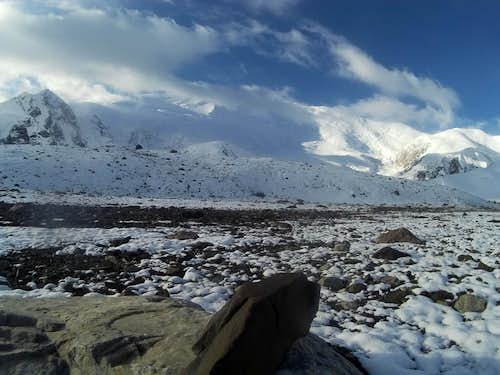 A climber can be perfectly prepared physically for climbing. He can have an excellent, modern equipment, exceptional health, but not reach the top. And the reason for this is nature itself - bad weather. Blizzard, wind, cold - all this can make you refuse to climb and turn back. Man is not yet able to control forces of the elements. At the height, he is especially vulnerable to them. He is literally one on one with nature. But when planning an ascent, it is necessary to carefully choose the time of the year, the month for going to mountains, to study not only the weather forecast, but also the statistics of the successful ascensions done in previous years, and look at the dates of their fulfillment. The Internet is a great helper with this. In Internet you can find a lot of ​​necessary information. It is possible to consult with people who used to ascend the mountain chosen by you on the route that you are planning, and the more such consultations, the better. Do not be shy, it's better to be a bore and a pedant than to treat mountains light-headedly.

During their stay in the mountains, almost all climbers closely monitor the weather forecast and plan their ascents based on information from various sites, and some - order chargeable weather forecasts. Of course, it's great that in the age of modern technologies all this is available to us, but it is better to not only closely monitor the weather forecast during acclimatization, but also be able to make a forecast - at least for several hours, that are enough for a dash to the summit. Learning this is quite possible. Many mountaineering textbooks give a good course on independent weather forecasting. Because the forecast that some specialized sites give us is certainly great, but alas, it does not always turn out to be correct. I myself witnessed such an erroneous forecast, when on August 10 above 6500 m it was forecasted an excellent, clear, cloudless weather with minimal wind, but in fact - a blizzard, the wind was intensifying since the early morning and a cloud settled on the top. An incorrect forecast led to an unsuccessful ascent attempt, me and my partner had to lead clients from a height of 6600 m back to the third camp. The
next day we repeated the attempt and everyone reached the summit and descended safely, but the fact remains that the forecasts cannot be trusted on 100%. In
2011, in the Himalayas, a similar error happened to a well-known sportsman with a paid forecast on the slopes of the 8000 m mountain. Thus, if you do not reach
the top due to bad weather, then it's not the weather that's at fault, but you yourself. Most likely, you just wrongly chose the time to ascent.

Bad state of the route. 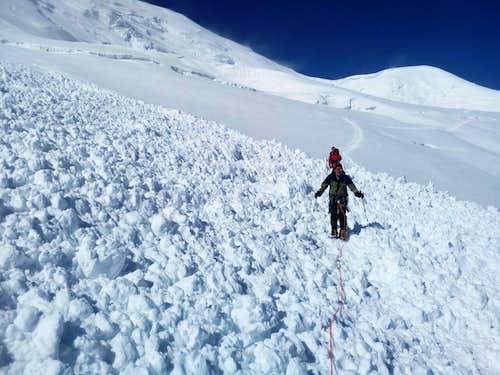 The cause of a conscious refusal to ascend can be a bad state of the route. And again, I believe that in most cases it is a mistake of the ascender. Carefully study of the statistics of ascents, the time of their commission in previous years can avoid this. You just need to choose the time of the biggest number of successful ascents on the route chosen by you. Of course, one year is not like the other. One can be snowy – routes become avalanche dangerous, other windy - the ice fields open on the routes, for which you are not ready, warm – the stones thaw out and there are sudden rockfalls. But statistics is a stubborn thing, and mostly on classic routes all these dangers are minimized, or such areas already have handrails and are relatively easy. I'm not talking now about "sport" routes or pioneering - everything here is sooo different. 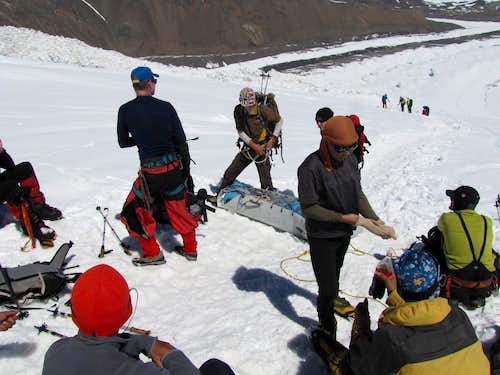 Some well-trained climbers were suddenly stricken by ailment, which I also repeatedly witnessed. Some come to the mountains already injured and sick, knowing very well about their illnesses. The illness affects others already in the mountains. If the first ones risk their own life and the life of their partners consciously, which is generally unacceptable, the latter ones do it without any intent, but the mistake is here too. What prevented to properly check their health before leaving the mountains, what prevented a full-fledged diagnosis of their body? It may be dreary, long and sometimes expensive, but it's your body! And if it fails at the most inopportune moment - you will be the one getting injured! And your partners, who will have to save you, sometimes with a risk for themselves, can get injured.  This scenario is very likely if the illness will take you above 5000 m. There any cold and small sore grow into a biiiiig problem. At best, you will be saved. A few men, puffing, sweating and swearing, will take you to the doctor and they will pull you back to life.

Bad physical training of the ascender. 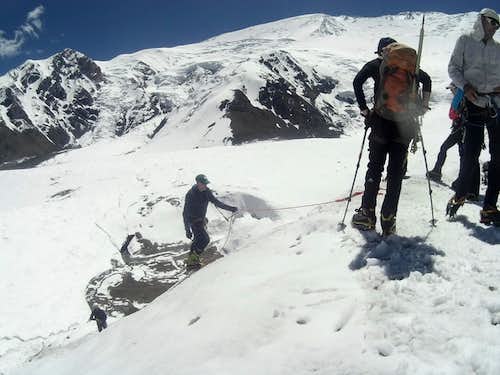 Weeeell, there is generally so much space for verbiage that I do not even want to write. This topic is from the category - we'll sit, drink a beer, chat. If anyone is interested – I am ready to say my own and generalize other people's thoughts about it. Although there is so much written about this subject, it does not make sense to repeat it. Remember the main thing: mountains do not care about the fact that you have work, family, studies; that you are, let’s say, a prisoner in a colony or an oligarch, and you do not have time for such nonsense as full-fledged training. Mountains do not care! You are either ready for the ascent or not. Either trained or not. And how hard to train - the question is only your personal volitional qualities.

Bad equipment of the ascender. 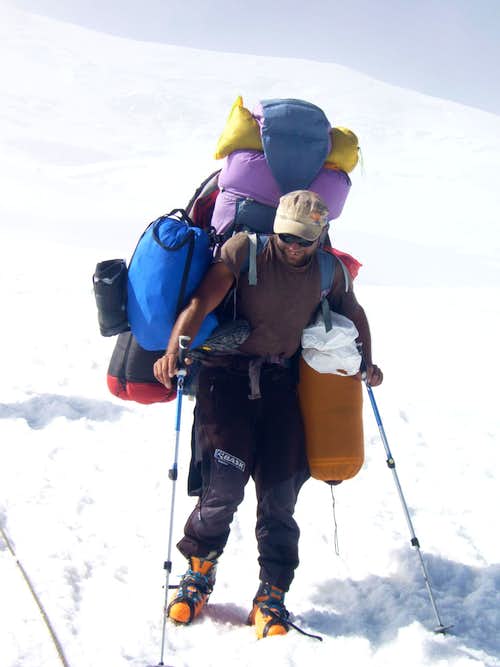 Ascends to mountains are committed since immemorial time. Shepherds, hunters, runaway criminals and others ran, climbed, crawled the mountains. Some even lived on them, some still live. All these people have survived in the mountains since immemorial time. They did not have a gortex and high-altitude boots, polar and downy sleeping bags. Of course, they did not climb very high peaks. But in the seventeenth century, mountaineering was born. People began not only to go to the mountains, but began to "conquer" the peaks. They began to come up with special clothes and accessories that would facilitate this process. Since the middle of the twentieth century, people began to walk to the heights above 8,000 meters. If we look at what they had back then, we will marvel at their persistence and heroism. But they did it! Bad equipment as a reason for refusing to climb the summit is the most ambiguous reason. On one hand, who prevented you from trying hard on making money downstairs and buying yourself the very best, easy, lasting and modern equipment? On the other hand, until the eighties, ascenders were in such clothes and with such technical equipment that is now available even to a student. Of course, it's better to walk with new beautiful modern equipment, it's easier, more pleasant and the main thing is – it’s much safer than with the old one or without it at all. Your limbs are in one exemplar, and you will not grow them again, but the faces of heroes of the past are right before your eyes. 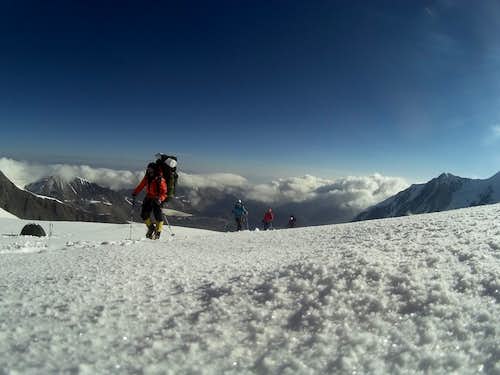 Someone thinks that by hiring a skilled guide you can avoid almost all problems. Of course, a guide will try really hard for your successful ascent and for your safety. He will choose the best route, time for climbing, tell you when you need to turn back, and when, vice versa, you cannot stop. But a guide can’t bring you to the summit, and therefore your pre-preparation before going to the mountains is entirely on your conscience. Train, watch your health. Do not increase the sad statistics in the mountains; do not turn mountaineering into a mourning sport!


Perhaps, after this post I will be anathematized / put on a stake / publicly crucified / subjected to public censure / sent to Guantanamo, etc. etc. Like, who am I to teach you life? I'm not a guru from mountaineering. It's just my observations and my personal opinion.