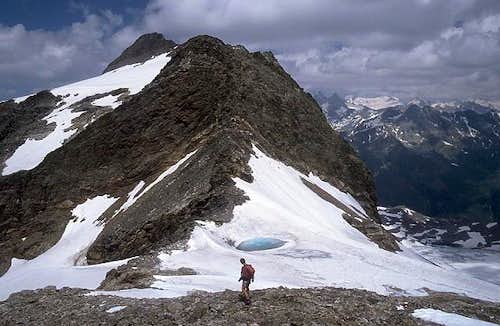 This nice mountain, the fifth highest in Rieserferner group, is frequently visited, especially in summer. But the ascent is not the easyest one, you need some experience in steep rock and crossing snowfields, although the most exposed rock passages are secured. From the west the summit is also appropriate for a long ski tour. Lenkstein / Sasso Lungo has no high walls and is not very attractive for climbing.

Lenkstein rises in the main crest of Rieserferner group, between the valleys of Defreggental (on the east) and Val del Rio / Bachertal (on the west). Actually, on the south of Lenkstein there is the side valley of Defreggental, called Patschertal.

The summit has a great panorama. The highest summits of Rieserferner group are seen from north, so even now, when glaciers are receding, Hochgall, Schneebige Nock and others are seen from Lenkstein / Sasso Lungo with a nice snow and ice cover. Towards west Durreck group is seen, beyond it and towards NW Zillertaler Alps and towards north the highest peaks of Hohe Tauern with Grossglockner and Grossvenediger.

For the overview of approach possibilities, see the general Rieserferner Group page.

1. From the west: parking place Sage, 1580 m in Bachertal / Val del Rio - Furtalm, 1787 m - Ursprungalm above Ursprungtal/Val Sorgiva - crossing the upper part of Ursprungtal/Val Sorgiva by A. Hartdegen Trail, to point 2350 m (to this point also possible from the Hochgall Huette) - further towards the east to the summit. 6 hours, steep terrain on the upper part, passages of UIAA first degree climbing. This route is used also as a ski tour.

2. From the south: Patscher Alm, 1667 m - Neue Barmer Huette, 2610 m - Rosshorn Joch, 2916 m - Lenkstein Joch / Bochetta Sasso Lungo, 3084 m - summit. The main ridge of Rieserferner group continues over Lenkstein / Sasso Lungo towards the north-northwest. On its northern and north-eastern side Fleischbachkees (glacier) lies. It is unclear if it is accessible from Defreggertal (or its upper part - Arvental). In this case Lenkstein Joch / Bochetta Sasso Lungo, 3084 m would be accessible also from the east.

No limitations for the summit ascent. The road to Defreggertal (to Patscher Alm) has to be paid, the road to Patschertal is closed for public traffic.

In summer probably weather is the most stable from July to October. In June there can be considerable snow rests, in October in high regions first fresh snow can fall. In spring the best months for the ski tour are March to May.