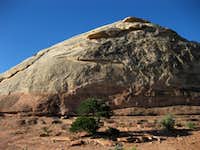 If you are an outdoor enthusiast in the Grand Junction area, you likely need no introduction to Liberty Cap and probably don't have any use for this page, either. However, visitors to Colorado National Monument may find this page useful as they look for things to do in the area. The hike to and scramble up Liberty Cap make an excellent two- or three-hour outing that is suitable for almost all ages.

Just what is Liberty Cap? According to an NPS sign near its base, Liberty Cap is "a 160 million year old remnant sand dune that is slowly succumbing to the forces of nature." Far from being a major peak (it is only about 50 feet high), it is merely one of seemingly countless rock outcrops in the monument, and no more or less spectacular than most of the others, but two things make it stand out and make it a popular destination:

* It is prominently visible from many points in the area.
* It is one of the many formations that drew the attention of John Otto, and it still bears his mark.

Starting in 1907, John Otto, an engineer, lived alone out in this country and loved it so much that he led the charge to protect the place as a national park. Inspired by him, many citizens of Grand Junction wrote letters to Washington urging the creation of the park. Otto also built trails out here so others could enjoy the natural beauty, and he installed bolted ladders on many cliffs and other rock formations, including Liberty Cap and Independence Monument, so that others could enjoy them. Many of those ladders have been removed for safety reasons, but some do still exist and are usable. Even though Otto's methods would be frowned upon today, in his time, his efforts were exemplary and reflected a passion to share and inspire, not to defile. In 1911, Colorado National Monument was established, and Otto became the park's caretaker and did that job for 16 years, earning only $1 a month, for it was really a labor of love.

Although I have not been able to confirm for certain that John Otto named this "peak," I have found out that if he did, it was probably named "because it was thought to resemble the small cloth caps worn by the libertarians during the French revolution" (source). Otto, a fervent patriot, did raise an American Flag atop Liberty Cap on July 4, 1909. Two years later, he famously raised a large flag atop Independence Monument on both Flag Day and Independence Day.

However, the formation also bears more than a slight resemblance to psilocybe semilanceta, a psychedelic mushroom. Its shape is also aptly compared to a Hershey's Kiss in this SP trip report that is also a good source of information on the peak.

There is no flag atop Liberty Cap now, but an Otto-built ladder is there (possibly reinforced out of safety concerns, but still his work) to help people reach the summit.
Update April 2013: Sometime during August 2012, the ladder was removed.  Whether this was done by the Park Service or by vandals, I don't know.  Shortly after, part of the ladder was replaced.  However, I've been told by an SP member who was here in April 2013 that the ladder is gone once again, with only some spikes remaining.  Information on this page about the ladder stays for historical purposes. 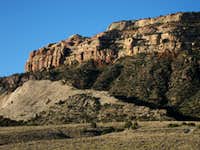 Trailhead view
By far, the shortest approach to Liberty Cap is from Wildwood Drive just outside the monument. To get there from Fruita or Grand Junction, turn off Broadway/Redlands Road (SR 340) onto South Broadway. Less than a mile from South Camp Road, turn onto Wildwood Drive and go a short distance past some homes to a designated parking lot and trailhead that can accommodate several vehicles. You probably don't want to show up here in the middle of the day on a weekend, as the lot may be full and legal parking outside it will not be available. For reference, use this map.

The Wildwood Drive trailhead is at 4750', and from it Liberty Cap Trail climbs 1.5 mi and about 1100' to Liberty Cap. It is gentle going at first, but soon the trail becomes steep and rugged and is pretty challenging as far as trails go. There are sections where the handiwork of John Otto is visible as evidenced by rock cut to facilitate human passage. Sometimes the trail is faint and is more a route than a true trail, but it is easy to stay on course.

As you approach Liberty Cap itself, take note of interesting formations such as outcrops and small arches in the vicinity. Sheer cliffs will ultimately block your movement, but it is possible to do some exploring in the vicinity, and some perches have dizzying views over Ute Canyon.

An easy scramble gets you to the ladder, which is on the southwestern side of the formation. Then the ladder helps make what would be a 15' Class 4 or 5 friction climb into something much easier (Class 3). If ego forbids you from using the ladder, it is possible to climb its path without touching it, but bear in mind that the shallow depressions you use as holds are probably human-created from many years of use here, so you are probably still "cheating" even if you don't use the ladder. (Full disclosure-- I did not use the ladder going up but did use it going back down.)

After climbing the ladder, it takes a few seconds to hike over to the actual highpoint, where there are excellent views across the Grand Valley to the Book Cliffs, including spectacular Mount Garfield.
Note: As mentioned in the Overview section, the ladder was gone as of April 2013.

If you head in from Wildwood Drive, there are no fees. However, take note of the signs that make it very clear that locals do not like parking or any other kind of trespassing on their property.

If you are approaching from Rim Rock Drive, then there is a $7 per vehicle entrance fee. $4 for hikers, bicyclists, and motorcyclists. Annual pass available for $20, Interagency Pass (good for entrance fees at most federal recreational sites) available for $80.

I don't know if it's legal, but you could probably get away with sleeping in your car at the Wildwood Drive trailhead as long as you don't call attention to yourself. Although you are not right next to private residences, you are a stone's throw from them.

Off Rim Rock Drive, Saddlehorn Campground, by the visitor center and close to the west entrance, has first-come, first-served sites, running water, and flush toilets. There is a nightly camping fee.

The ladder is not there anymore, only a few spikes. Still easy to scramble up and down.

Thanks for telling me, Liba. I'll need to update the page.