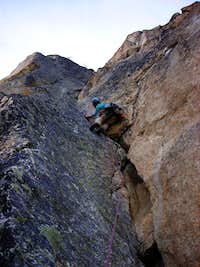 P10
This classic line climbs the left edge of Liberty Bell’s impressive 1200-foot tall east face and it has been included in Roper & Steck’s classic list (number 24). The crack becomes continuous only after the first 3 pitches (which for most are mostly aid). Some loose rock is encountered about mid-way up but constant traffic has likely dislodged most the big stuff (though you never know – hope the Rotten Block does not go on your shift). First recorded attempt on the route was made by Steve Marts and Alex Bertulis in 1964 when the two had pushed up the initial 1.5 pitches. The duo had bailed just below the prominent roof, now called the Lithuanian Lip in honor of Bertulis’ country of birth. On July 16 1965, Marts (along with Fred Stanley and Don McPherson) returned and the FA was completed over a 3-day period. A year later Bertulis returned and established a more direct variation of the line that (likely due to thin aid) never caught on. The classic rating of the line was V 5.9 A3. Since then, the line (with very minor variations but some pre-placed gear) has gone free at mid 5.13’s (with the crux pitch being the Lithuanian Lip) courtesy of Brooke Sandahl (yes, Lynn Hill's partner on FFA of Nose among others).

Today, most “weekend warriors” do the line by either fixing the first 3 (mostly aid) pitches and firing up the next day or do the whole thing in a day. Most of those likely do the route at about 5.9 to 5.10 and C2. This aid rating is on the conservative side: though there are a few interesting (usually fixed) placements, you're never looking at ripping out more than one or two pieces if things blow (really more a C1). So long as all the fixed hardware remains fixed, the route goes hammerless (though in July of 2007, one KB looked as though it was not long for this world without some blows from a hammer to reset). Furthermore, with the accumulation of fixed gear on the line, grade V rating seemed conservative (grade IV seems more accurate). Though some historical hardware does remain, all belay (and many lead) bolts up to the rotten block are new and beefy.

Given its classic status, the route sees much traffic. Either start early if doing it on a weekend or give yourself a day to wait out a party or two ahead of you. 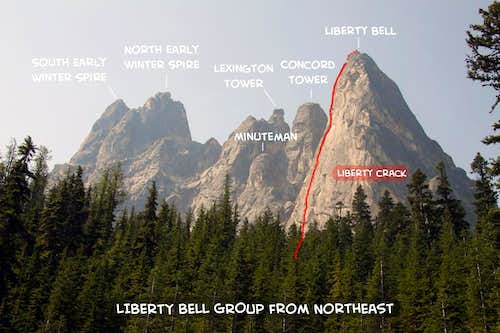 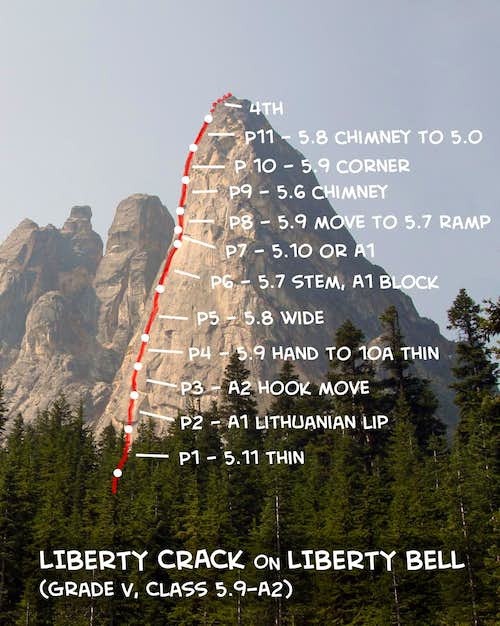 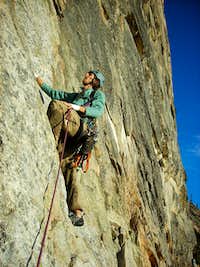 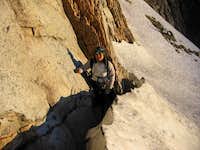 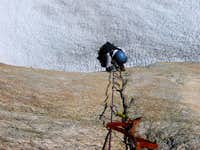 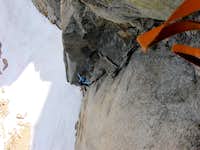 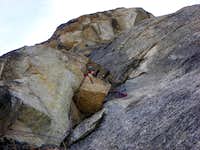 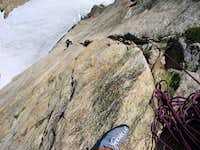 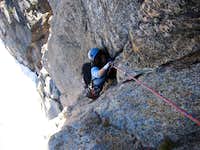 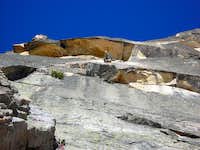 P1
We followed this topo stretching pitch 7 to the indicated optional belay then going straight to top of pitch 9 (hence 1 less pitch in description below vs. topo).

Pitch 1: 5.11 or C1, 100 feet. Look for a 30-foot tall “protruding slab” directly in line with the light-colored streak that marks pitches 1 and 2 above. Scramble up the left side of block (class 3) or right side of block (class 4…though seemed about 5.6). Move up the right facing dihedral then up the thin splitter crack past a fixed KB and a fixed angle. Belay 20 feet below roof from comfy stance and two fat bolts.

Pitch 2: C1+, 80 feet. Move up the left facing dihedral (aid) toward the roof (a.k.a. Lithuanian Lip) and move past the roof (bolt and fixed pin). Follow thin crack and bolts above (some mid-5th free is required) to another good stance with fat bolts. Can you see climbers here?

Pitch 3: 5.7 C2, 80 feet. Move up and slightly left from belay following fixed pins and eventually fixed nuts and heads. One (positive) hook move (which according to most TR’s is not mandatory) above is followed by a short section of crack (supposedly free at 5.10 but short) and a mandatory single exit free move onto a stance with belay bolts.

Pitch 4: 5.10, 70 feet. Move up the crack which is mostly 5.9 but has a 5.10 crux near the top just as rock quality deteriorates. Belay from beefy bolts on a stance with a small tree/bush.

Pitch 5: 5.8+, 160 feet. Move up into a steep groove and follow it to the top. Single #3.5 and #4 Camalots were sufficient (smaller gear can be used much of the time). Long pitch and sustained at the grade. Exit right onto a small stance and two bolts.

Pitch 6: 5.8, 160 feet. Move up the stem box with chossy rock and bushes. Continue up the stem box (turns into a right-facing dihedral) past a bolt and then a 12-foot flake in the dihedral. Either aid the left side of the “Rotten Block” (10-foot chunk of rock mysteriously stuck in the dihedral) on fixed pins or free the right side at (supposedly) 5.10 with a new bolt near the top. Belay atop Rotten Block from two (new) bolts.

Pitch 7: 5.10 or 5.9 C1, 150 feet. Move up the flaring chimney above rotten block (5.10 or C1) to gain a slab/corner system above which starts out steep but eases above (some fixed pins). Either belay on left edge of slab (one new, one old bolts – not so comfortable and you’ll probably add an extra pitch) or continue ~50 feet higher. A headwall is overcome by stepping down and left (seemed hard for 5.9) and then moving up an 8-foot crack to top of this headwall. Belay at a small stance with two fixed pins (supplement with gear).

Pitch 8: 5.7, 160 feet. Move up and left following the awkward ramp system. Move past a ledge with large tree and up into a 5.6 chimney. Belay above from large trees at the base of a (initially) low angle, left-facing dihedral.

Pitch 9: 5.9, 160 feet. Move up the left-facing dihedral and follow it (many fixed pins). Eventually a short (15 foot) chimney appears 5 feet to the left. Step into it (though there are pins higher up in the dihedral) and follow it to another good ledge with a tree.

Pitch 11: 4-th class, 200+ feet. Follow mostly flat but gravel-covered terrain west (away from route you came up). Either scramble to summit (see last pitch description of Beckey Route) or continue traversing roughly level with your belayer till you see a double bolt rap anchor.

Descent:
Do two 80-foot rappels (first is off of the bolts; second is from a large tree) into the Liberty Bell-Concord Tower notch.

Hike down the notch (snow or nasty scree) till the climbers’ trail (running along the base of the west faces of the Liberty Bell formations) is encountered. Hike it down until the junction (~20-30 minutes from notch) with the main Blue Lake Trail is encountered.

Turn right onto Blue Lake Trail and follow it (30-45 minutes) till the highway becomes visible as the trail makes a sharp left turn.

Bushwhack 300 feet toward the highway and hike it back to your car (~1 mile). 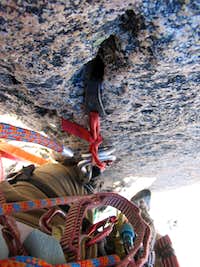 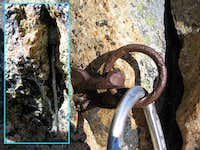 Climbers on P2 Roof
Good topo of route (one we went by) is here.

Some select TR's from the route:

(5) Nice TR with good photos from a day before we climbed the route. Their summary of the line kind of matches ours. 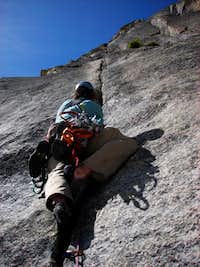 P4
(1) Classic Climbs Of The Northwest by Alan Kearney (ISBN 0-9669795-5-9). Excellent write up of the FA history, author’s own ascent story and a good topo and route description.