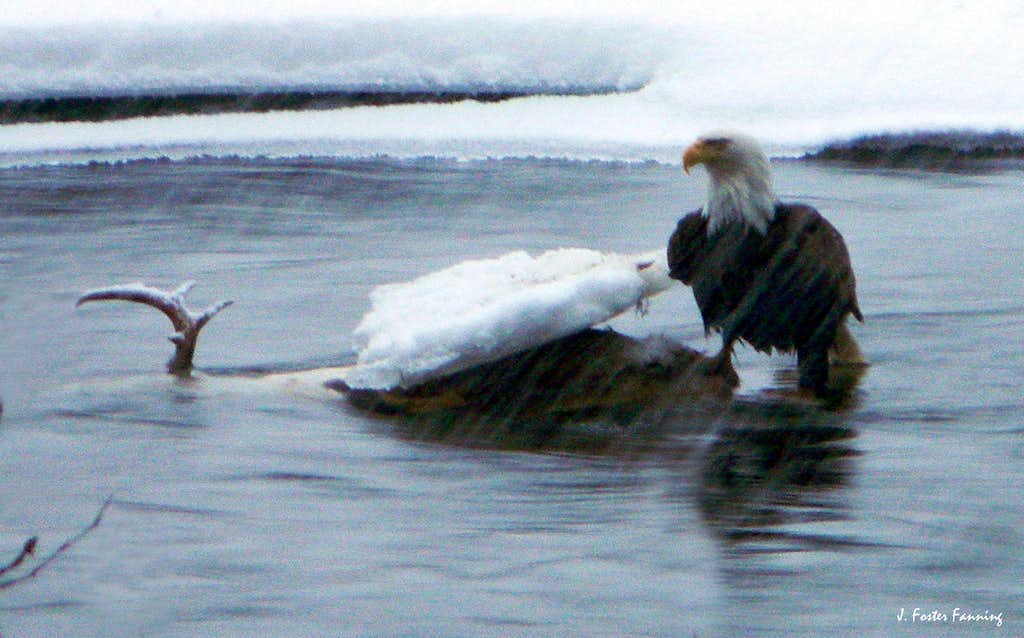 Caught this image late in the afternoon during a snow storm; a bald eagle working something in the stream. At first it appeared to be an ice block wedged on the gravel bar. I assumed a fish had come to rest against the ice. Closer inspection reveals it is a nearly submerged, dead buck that the ice has stopped on. Occasionally deer will get hit by a vehicle and wander into the river before expiring. Also, this time of year, as the winter ice thins, deer crossing the surface break through and drown. Whatever fate brought this buck to it’s death in the stream the eagles will take advantage of the gift of life it brings.
« PREV NEXT »

Thanks Bruce, it certainly was a rare opportunity. There were two eagles competing over the carcass but they eluded me efforts to capture them together.

Man, this is really wild ..

I'm not used to seeing a river partly frozen,
or "completely" frozen like the ones up in
Canada and the Yukon.

Eastern Washington must get a lot colder
than the western half, but it's just as
scenic, if not even MORE wild ..

Yes, many of the rivers in NE Washington freeze over in the winter, the Kettle, the Okanogan, the Methow and the San Poil just to name a few.

Of Life and Death on the Kettle River(Album)