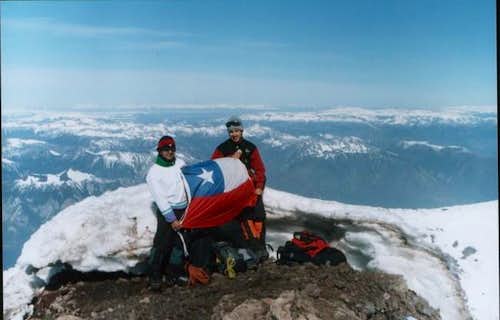 Summit shot by SPer felipexp
Volcan Llaima is perhaps among the most beautiful volcanoes in South America. Usually an attractive alternative to the more crowded Volcàn Villarica, recent increased volcanic activity with eruptions made it clear that this is still a very active and hence at times dangerous volcano.

It stands 80 km (50 mi) NE of Temuco, from where one can already see its cone with the two summits. This resulted from a large eruption 13200 years ago, which left a caldera measuring 8 km (5 mi) in cirumfence.

The first known ascent was done by Carlos and Augusto Rimbach in 1909.

The name "Llaima" means in the native Mapuche language "Reawakened One", probably refering to its volcanic activity.

Volcan Llaima is a composite volcanoe and among the most active volcanoes on earth.
Since historic records of it´s activity exist - 1964 - more than 30 eruptions of various magnitudes have been, registered. The last eruptions were in January and during the summer of 2008 and the last large eruption in May 1994. Also in the summer of 2008 increased seismic activity was reported.
The January 2008 eruption resulted in the rescue of some 50 tourists out a threatened area from which escape was blocked and in the evacuation of people in surrounding villages.
During the large May 1994 eruption, the column of pyroclastic material, gases and water vapour was more than 7 km (4.3 mi) high.
Volcanoe Llaimas main threat to the environment is the combination of volcanic activity and the snow and ice masses on the mountain. It was estimated that the volume of the glaciers on Volcan Llaima is 670 mio. m³ (23 bill. ft³), that equals
535 mio m³ (18.9 bill. ft³) water.
The temporal snow adds another 800 mio m³ (28.3 bill. ft³) - that equals 300 mio. m³ (10 bill. ft³) water.

This can result is lahars (pyroclastic flows w/ high amount of water in it, volcanic mudflows) and posses a treat to the people living in the region.

Llaimas largest glacier (367 mio m³/12 bill. ft³) is located on the west side of the volcanoe. 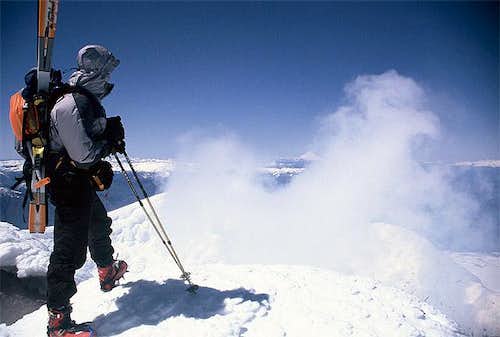 Photo by SPer Ski Mountaineer
Volcan Llaima is fairly easy accessible. The town of Cherquenco will be your starting poing. It is regulary bus-served from Temuco.

From Cherquenco you can either

2. Hitch-hike: This will of course depend on your luck. Not too many people to the mountain, but:

- there are people living near the mountain; they can take you at least parts of the way
- apparently the small ski resort on the base has re-opened, resulting in increased traffic during the winter
- summer sees more visitors, too

Pitch your tent near the hut used by the military, near the ski slopes.
The soldiers are nice and friendly - we could even use their bathroom and water tap when we were there in spring 2002.

There is a CONAF checkpoint on the way up to Llaima, about 5km out of Cherquenco. Here you enter the Parque Nacional Conguillio.
Apparently the price for entrance into the park is 2800 Pesos (about 5$) for adults and $800 (about 1-1,5 $) for children.

When we went there in 2002, there was noone at the checkpoint. This will vary from season to season.

September usually has a lot of rainy days.
November can still have quite large amounts of snow, depending how much snow fell in the winter. Short-skis are probably the best bet here

If you intend to do mountaineering or trekking in the area around Volcan Llaima, I suggest getting the map "Curacautin" (1:250 000) from the Instituto Geográfico Militar in Santiago de Chile, or one of their more detailled maps in 1:50 000.

Costs 8100 Pesos.
IGM maps are quite detailled and the best map you can get for this region. However, roads are sometimes not correct, important for those who intend to go travel by 4 WD or motor cycle. Get in this case additionally a good road map in Chile.

Camping is allowed anywhere on the mountain. However, this is a National Park - so take out what you take in.

You can contact various mountain guides and tour agencies in Pucon. Volcan Villarica and Llaima have often similar conditions. However, reliability of this information is not guaranteed.

You can also contact me. I usually know how conditions are or can contact friends who live there.

For the ones that speak Spanish/Castellano and can interpret meteorolic data the website of the Dirección Meteorológica de Chile provides information. 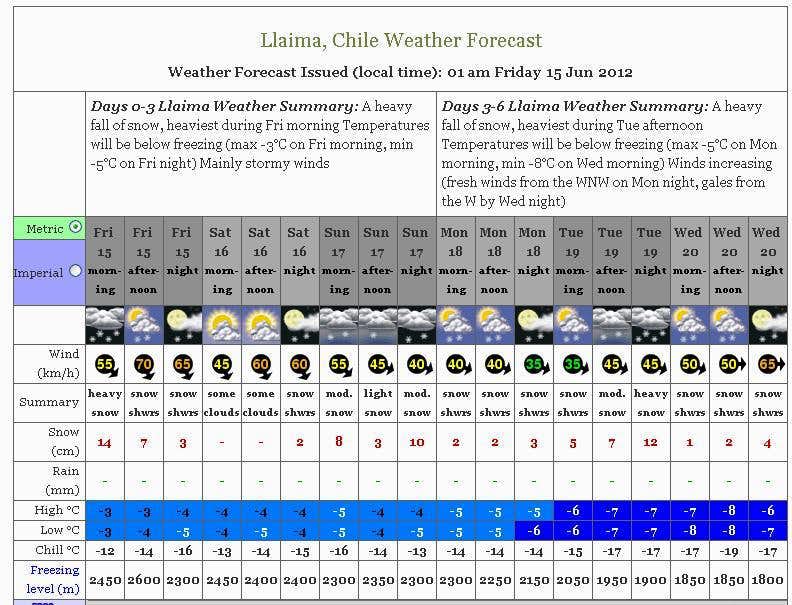