Lofoten is a chain of islands far north on the coast of Norway. This page is about the three southernmost islands, Röst, which is far out in the ocean, Väröy and Moskenesöya. Lofoten is an absolutely incredible place. It's gorgeous and dramatic, with mountains growing straight out of the ice-cold waters of an Arctic Ocean. At the same time the climate is fairly mild, thanks to the Gulf Stream. Not being a good photographer, I cannot give this place the credit which is due to it, but I sincerely hope there will be more photos added. 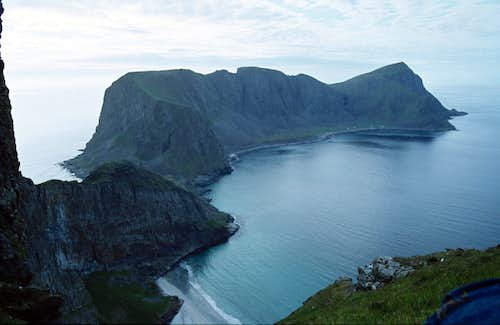 Röst is very flat, only 5 meters above sealevel. This is where you get a boat to take you to fuglefjellet Vedöya, which is 209 meters (686 ft) high. Fuglefjellet means "Mountain of birds" and the puffins nest there. The only thing to climb is Vedöya, and that's quite easy. It's steep partly, but one just needs a little help by hands.

Väröy is the next island, and it seems to grow straight out of the sea. The strong granite are rugged and down by sealevel, there is a thin line of land where the fishing villages with the harbour lay. One can climb the entire island, but Nordlandsnupen is the heighest with it's 450 meters, as far as I know. An arial photo here. There are puffins on Väröy, too, on Måstadhalvöya. They used to hunt the puffins and ate them. 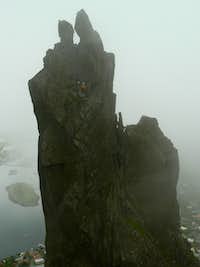 Moskenesöya is the nest island northward, the start of the more massive part of Lofoten. The fjords in Norway are valleys, where ice and water has washed away the eroded silt. The Norwegian fjords are deeply and dramatically cut into the landscape, and can be 1300-1400 meters deep. The contrast with the neighbouring Swedish mountains is striking, instead of the soft roundness of worndown summits, these are pointed and sharp. On Moskenesöya you can climb their highest summit Hermannsdalstinden, 1029 meters high. I don't have photos, but here's photos (and route, but it's all in Norwegian): Hermannsdalstinden. Svolværgeita here on SP is another summit. Svolværgeita is the climb, the classic Lofoten climb.

Goldie Oz adds that the town of Henningsvær is a bit of a focus for climbers. The climbing school is there, stacks of graduates from the popular outdoor school at Kabelvåg can be found working around the place and the Climbing Café is pretty lively too. It also happens to be very picturesque and small.

One can choose what kind of climbing one wants to do on Lofoten, there are walls and there are routes which only needs scrambling. 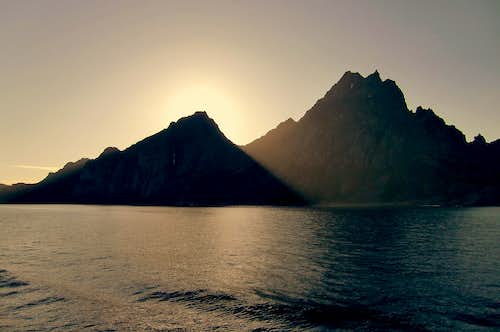 The wildlife consist mostly of birds, whales and seals. One can lay on one's stomach looking over the edge and watch sea eagles soar underneath one. Birds you're likely to see is puffins, three-toed gulls, petrels, gannets and cormorants. Orchids bloom here.

There are whale safaris from Andöy or with Orca Tysfjord where you can go out and watch the killer whales. Sometimes there are herds with killer whales in the Norwegian sea.

Lots of info here about "Climbing in the Magic Islands" The trophy climb and the obligatory jump! "

One can take the train from Oslo. Scanrail is a pass which allows you to travel in all Scandinavia, for 21 days. There's also Scanrail Flexi, which gives you 5 travelling days during a 15-day period. Euro Domino is another kind of pass, allows you to travel in one or several countries during a month. One chooses 1-8 travel days during that period. NSB, the Norwegian train company

There are also buses from Oslo. To get out on the islands, take the ferry from Bodö to Röst or go by Hurtigrutten You can bring your car on some of the Hurtigruttenboats. The ferry company, OVDS has car ferries, fast ferries and the Hurtigruten. One can only book for the car during summermonths (June-Aug). It costs 132 NOK for a grown up during winter and the winter timetable says one boat a day.

One can also fly from Oslo to Bodö Braathens or Wideroe . To Röst there's boat, flight and helicopter services.One can also drive all the way through Norway, but it's a very long trip.

Another way to arrive is to take the train from from Kiruna in Sweden, pass Abisko with the National Park, get off, climb Njulla, get on the train again and arrive in Narvik. From Narvik take the boat down to Svolvaer, the main town of Lofoten. From Svolvaer one can keep on going further south, to the islands.

General information can be found at Lofoten Tourist Board 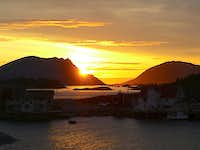 There is no red tape in Scandinavia. It is probably one of the safest places on earth to visit. And up here it's clean. One can drink the water straight out of the creeks in the wilderness, without boiling it first.

There are some rules, though. Use your common sense, same rules everywhere in Scandinavia: Do not destroy, do not disturb. Otherwise, it's a free country, roam the lands at will. Residents from some countries needs visa, though. Information about visa to Norway

The rules say: - You can put up your tent for two nights at the same spot in the forests and the mountains without permission from anyone (but I have stayed longer in the same place, and haven't had any trouble. ) - Not closer than 150 meters to any house. - Growing crops, newly planted forest are forbidden for access. (Ask first if you want to put up your tent inside the fence of enclosed pasture land.) - It's forbidden to make a fire in the wilderness between 15 April to 15 September. The rules in Norway are very much alike the Swedish Allemansrätten. This link goes to the Norwegian rules, but unfortunately it's only in Norwegian...The Norwegian Allemansretten</a 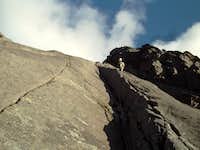 The weather in Norway in English

When on Väröy, there's a small beach that only can be reached either by boat or by climbing over the mountain. One has perfect privacy there and a mighty view. Norwegian Camping Guide Visit Norway's (the official tourist organisation) Camping

Hostels in Norway. On Röst there's a hostel called Fiskarheimen. Phone: +47 760 96109 There are more accomodation possibilites, call Röst Turistsenter: +47 760 96490 or Kåröya Rorbucamping: +47 760 96238. The hostel in Väröy The locals are kind and used to people camping, but choose a place to put the tents up where it doesn't disturb people unnecessarily. There are plenty of places to just pitch your tent up. Water's clean. On Moskenesöya there's one hostel in Å. There are foodstores on every island, down in the harbour if staying on Väröy.

Well, they are much alike year around, wetter and colder in winter, but not much. But in wintertime there's no light! This is far above the Arctic circle and the 23rd of September the daylights starts to vanish. At the midwinter solstice the 21 of December it's pitchblack, it's the Polar night, with only a grey twilight in the middle of the day. On the other hand, after Spring solstice it's very much light, and thanks to the Midnight sun in summer, one doesn't have to bother what time of day it is, several of my photos on this page are taken at night. The southernmost island Röst has Midnight sun between June 1 and July 15.

The weather can really change tremendously, very fast and also in long time view. One summer was lovely, we even swam in the Arctic Ocean. 11 degrees Celcius (I will never do it again... )The next summer it was such stormwinds, that our tent ripped open in the seams and we had to move into the other one with the guys. We laid in there, four people, waitin for the wind to lift the entire tent and blow us out to sea. 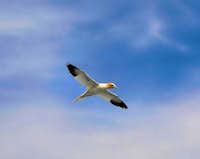 Saltstraumen in Bodö (where you take the boat to Lofoten) is the strongest maelstrom in the world. In every six hours, 400 millions m3 of water at speeds up to 20 knots, rush through a very long and very narrow sound which connects Saltenfjord with the Skjerstadfjord. The whirlpools can be up to 10m in diameter and 4-5m deep, and they are powerful! Taking the boat to Moskenes, you pass through there.

On Väröy there was a village called Måstad, inhabitated with around 150 people. In order to hunt the puffin more effectively, they raised a dog. The dog is called "lunnehund" (puffindog) or sometimes Måstadhund. There around 700 of those in Norway today and they all originate from Måstad on Väröy. They salted the puffinmeat and ate all autumn. But, there were no roads and the harbour was bad, so Måstad was abandoned after the world wars. Nowadays one can sleep in the old school summertime. Another unusal pastime for people living on Väröy was hunting eagles with their bare hands. On can still see the "eaglecatchholes" which were used. 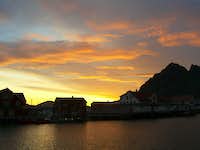 Fishing is a big pastime here. The big cod (Gadus morhua) and the saithe (Pollachius virens) seems to be around Röst all year around. Most are there during playing time though, January to April. The best areas are in Northeast and Southwest. Northeast (Spjutskallen och Flua) is the closest. Southwest is called Skomvaer. Smaller saithe at 25-40 meters fishing depth, bigger deeper. But the Sea of Röst is prone to change fast, often and severely, be prepared for bad weather.

The coastline closest to shore is relatively shallow, but it's not far to the end of the continental shelf, where the depth of the water dramatically sinks to thousands of meters. The closest place in Norway (and the entire North Europe) to the Continental shelf is from Andöya. At the nearest point it's approx. 12 nautical miles. Sea depths from http://www.ngdc.noaa.gov/mgg/image/2minsurface/1350/90N000E.jpg Overview page here, with explanations

There are some worthwhile guidebooks to Lofoten: -Ed Websters "Climbing in the Magic Islands" is mainly aimed at rock climbers, with some mentions of other routes. -"Walks and Scrambles in Norway" by Anthony Dyer et al, contains 8 mountaineering/walking routes in Lofoten, including 4 in Moskenesoya. Information from The Jambo. - Rockfax have released a new climbing guide calledLofoten Rock. Leviathan, climate table Nanuls, climbing guide 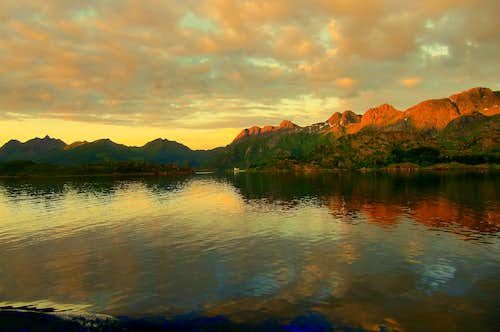 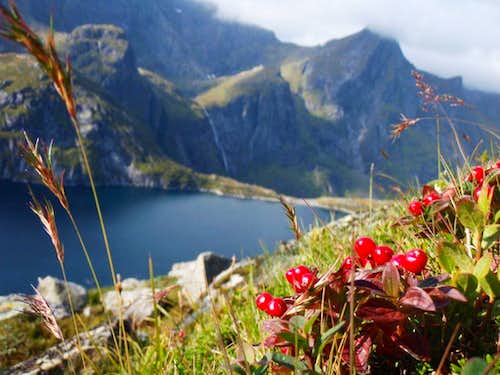