Splendid viewpoint from that we can enjoy one of the best views in Sistema Central (Central Range), in Central Spain, in the heart of the recently declared Parque Natural de la Sierra Norte de Guadalajara (a new Natural Park in Comunidad Autónoma de Castilla-La Mancha).
This unknown mountain is in fact a broad hill, located north of famous Ocejón (2.048 m.), the main summit in southern Sierra de Ayllón.
Campo (1.921 m.) and the nearby Campachuelo (1.899 m.) are strategically situated in Loma de las Piquerinas, a broad hill between the valleys of river Sorbe (east) and Jarama (west). There are two aditional 1.933 and 1.930 hights in Loma de las Piquerinas, but they aren’t geodesic vertex like Campachuelo and Campo.
A majority of mountaineers that visit Sierra del Ocejón (that is a prolongation of Sierra de Ayllón to the south), come here to climb the famous Ocejón, to take for a walk by the black architecture villages (Majaelrayo, Campillo de Ranas, Robleluengo, Roblelacasa, Campillejo, Valverde de los Arroyos...) or to contemplate two of the largest cascades in Sistema Central: la Chorrera de Despeñalagua in Valverde de los Arroyos and la cascada del Aljibe in Roblelacasa (both are recently signposted).
In a bright day we can catch a glimpse of several main summits in Central Spain: Peñalara (2.430 m., the highest top in Sierra de Guadarrama), pico del Lobo (2.272 m., the highest summit in Sierra de Ayllón), and even some remotes mountains in Sistema Ibérico (Iberian Range): Urbión (2.228 m.) and Moncayo (2.316 m.). The main routes begin in the beautiful villages of Majaelrayo and Valverde de los Arroyos. 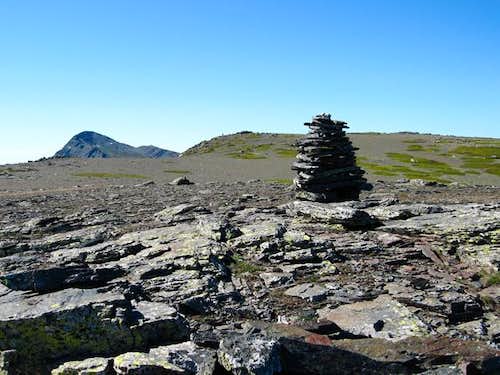 Ecological and etnographic values in those lonely mountains of Sierra de Ayllón suposed its recognition as Natural Park (Tejera Negra), Natural Reserve (pico del Lobo y Cebollera), Hunting National Reserve (Sonsaz) and even a proposal as candidate of UNESCO World Heritage. Recently, a wide surface of the north of province of Guadalajara has been declared Natural Park, as I've said above.
Mountaineers looking for the solitude and huge natural spaces with low densities of population will find in Loma de las Piquerinas an excellent place to find it. Large landscapes and an original vegetation (“gayubar”, similar to a green carpet that covers the ground in the tops, formed by a planta called “gayuba”: Arctosthapyllos uva-ursi) are another incentives to mountaineers.
A big depopulation during the last decades in those mountains of province of Guadalajara (Comunidad Autónoma de Castilla-La Mancha) has been partially reduced by the increase of rural tourism. Famous black slate architecture in the villages of this zone is an aditional interest: all houses are built using black slate in walls, floors and even roofs. Furthermore, the new houses are obligated to use those materials (slate and wood) by local laws. 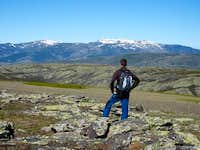 The best way to find your route is visiting the website of Guiacampsa introducing in the seeker the locality where you start your route and then the locality where you want to get (in this case, Majaelrayo or Valverde de los Arroyos, both villages in the province of Guadalajara, Comunidad Autónoma de Castilla-La Mancha).
From Center Spain:
If you pass by Madrid, take A-2 (or R-2, toll road) to Guadalajara. Then CM-101 to Humanes; finally, GU-186 to Majaelrayo or two kilometers away of Tamajón, turn right in a cross roads (GU-211) to Valverde de los Arroyos.
From northern Spain:
Coming from A-1 there is a long way to get to the villages nearby to Campo. Leaving A-1, you can take N-110 to Ayllón, then CL-114, CM-110 and CM-1006 to Umbralejo and GU-177 to Valverde de los Arroyos (if you want to get to Majaelrayo, take GU-211 and then GU-186 in the cross roads before aforementioned).
A shorter way is take SG-112 in the village of Riaza (situated in the province of Segovia and crossed by N-110), cross Puerto de la Quesera (a 1.710 meters mountain pass) and follow 22 kilometers by a local road to Majaelrayo. This last route is not advisable in winter, when the snow and the ice can make dangerous (or even impossible) driving by this local road.
From eastern Spain:
There are several possibilities, but the best is follow A-2 to Guadalajara, and then take the same route already described.
From western Spain:
Take A-1 and go out direction Montejo de la Sierra. From here, a local road ascends to Puerto de la Hiruela and continues to Corralejo. There is a descent with some curves to river Jaramilla and the road go up straightly again to Roblelacasa, where you’ll continue to Campillo de Ranas and Majaelrayo.
To know the road conditions is advisable visiting the link of DGT (Traffic General Direction), searching in province of Guadalajara (Comunidad Autónoma de Castilla-La Mancha) the incidences (specially important in winter, when the snow and ice can difficult the access to this zone). It’s convenient to mark that Puerto de la Quesera (in the border of provinces of Guadalajara and Segovia) usually is closed to traffic in snow season (this mountain pass doesn’t appear in the DGT website).
Another way to know the road conditions is visiting pages 600 to 611 of “Teletexto” in channels 1 or 2 of TVE (spanish public television).

No permits or fees are required to access to this zone, situated inside the limits of Sierra Norte de Guadalajara Natural Park (Parque Natural de la Sierra Norte de Guadalajara). It’s possible that excepcionally (a few days a year) we can have a hunting party (wild boars and roe deers are abundants and easy to see, even crossing the roads). In this case, hunters and forest rangers usually advise that it’s dangerous walking through the hunting area: it’s better to obey the signals that warn of a hunt and avoid these places. 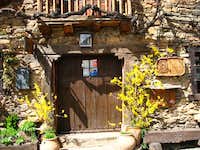 Camping is forbidden in all this area; however, it’s possible rise to Campo in the same day. It’s advisable completing this activity climbing Ocejón too another day, or enjoying of quiet and beauty of those little villages with its black architecture, its gastronomy (where detach the roast kid or “cabrito asado”) and even its old feasts: fiesta del Santo Niño in Majaelrayo, fiesta de la Octava del Corpus in Valverde de los Arroyos, Almiruete’s carnival, etc.).
Visit the web page of Toprural (looking for in province of Guadalajara) to find rural houses in the villages of this zone is a good idea. The nearby are the following: 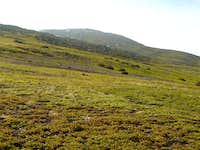 All year round it’s possible to climb Loma de las Piquerinas; however, is better in spring, when there are few hot days, the streams are replete of water, the snow still adorns the tops of highest mountains and trees (oaks...) and others plants present spectacular colours. Meadows are covered by flowers and new leafs appears in trees. In summer is preferable to rise early to avoid the hotest hours and to carry at least 1,5 liters of water, a good hat and sun protector.
In spring be careful in foggy days. Carry a GPS, because exists the possibility to get lost in Loma de las Piquerinas.
In winter we can find snow, but it’s not neccesary to use ice-axe and crampons: the slopes are soft. Be careful with cold days: those mountains of Central Spain have a continental climate and temperatures drop easily under 0ºC.
Visit the website of INM (National Meteorological Institute) to know the weather forecast.