Entire Cordon del Plata range with Lomas Blancas and satellite tops completely dwarfed at far right end (image by Jon Watt)
Lomas Blancas is a modest seeming three thousander in the Cordon del Plata range in the Argentinian High Andes, near to Mendoza. It appears completely overshadowed by 4000m and 5000m peaks all the way up to the highest summit in the group: Cerro Plata 5962m. Viewed from a long way away or from high up on one of the greater mountains it does indeed look rather miniscule. Nevertheless at 3642m or 11,950ft it is of comparable height to Alpine summits such as Aiguille du Tour, Domes du Miage, Doldenhorn and Grossvenediger in Europe and Assiniboine in Canada – none of which would be considered miniscule in their respective localities – which adds an element of perspective.

It is only right up close, for example when viewed from the Refugio San Bernardo at 2800m, that the mountain is able to dominate a large part of the skyline and can appear as something other than as a very lowly foothill. That said it is still a little dwarfed by San Bernardo 4114m, the nearest neighbour to the west – and beyond that, in the far distance, there are more than hints of an even bigger jump in scale…

Lomas Blancas and satellites - with larger neighbor Co San Bernardo 4114m off to left - viewed from Refugio (image by Jon Watt)
To the east of Lomas Blancas are the lesser tops of Arenales 3376m and Andresito 3140m. Although these are named summits they are really just satellite tops of Lomas Blancas – whose name translates to white hills.

Nevertheless all three of these little summits are popular objectives for day-trippers based in Mendoza, some 60km away. They are right on the eastern edge of the Andes range and looking towards the south east the terrain drops down nearly 2000m onto the flat semi desert plains around Mendoza. So, on a fine day, the views can be superb.

This little cluster of three thousanders also provides a useful acclimatisation exercise for mountaineers aspiring towards the bigger peaks further into the range – an ideal Day 1 of a program which a week later could culminate in a summit attempt on one (or all) of the big three Rincon 5362m, Vallecitos 5434m or Cerro Plata 5962m.

The mountains can be accessed from Mendoza by road, initially on the main Ruta 7 which passes the Aconcagua approaches before crossing the border into Chile and descending to Santiago. Leaving Ruta 7 at Potrerillos there is a mainly unsealed dirt road which winds its way up into the mountains up to Vallecitos 2900m, a ski resort in winter – but in summer the starting point for accessing the Lomas Blancas tops in addition to all the main summits of the Cordon del Plata group.

Mendoza is the main base in the area and is the 4th Largest city in Argentina. It is 1037km (650 miles) from Buenos Aires to the east and 380km (236 miles) from Santiago to the west (and across the border into Chile). These cities are well connected by road – taking about 13 hours to reach Mendoza from Buenos Aries and 6-7 hours from Santiago if travelling by bus. In addition Mendoza is well served by the Gov. Francisco Gabrielli International Airport and flying time in from Buenos Aires is about 2 hours and from Santiago less than one hour – both of which have lots of connections to the wider global network.

Follow Ruta 7 out of the city and then north-west towards the mountains. On a fine day views of the Cordon del Plata topping 5962m and Tupungato 6570m are stunning. The beautiful turquoise Potrerillos reservoir is passed on the right before reaching the town of Potrerillos. Ruta 7 carries on to the main Aconcagua approaches at Penitentes and Puente del Inca – before crossing a high pass and the international border with Chile – and descending towards Santiago. However the approach route now leaves Ruta 7 at Potrerillos turning left on to a smaller and attractive road leading between poplar trees and meadows to another little township at Las Vegas. From here an unsealed Ski-field dirt road winds its way up into the higher mountains. A 4x4 vehicle is advisable, but we did see ordinary cars managing the trip in February 2016. The road is however subject to washouts during heavy rain and condition cannot be guaranteed. A series of hairpin bends marks the arrival at Vallecitos Ski Resort and various lodges and homesteads are passed at intervals between 2600 and 3000 meters – up where the road ends and where there is a large parking area, alongside what is the main Vallecitos Ski centre, in the winter – from where the south ridge of Lomas Blancas can be accessed. Parking is possible at numerous places along the road, including on a hairpin bend at 2800m at the start of the main approach to Lomas Blancas and the satellite tops of Andresito and Arenales.

There are various lodges and Refugio’s in the area at between 2600-3000m where the road ends – and where the main ski field centre is. Refugio San Bernardo 2800m is ideally placed for the main Lomas Blancas walks. No reservation is required (or possible – we tried various ways to get in touch from e-mail, facebook and via the Trip Advisor – and no reply from any of them). However we had a warm welcome when we simply just turned up in February 2016.

For a detailed route description see account below written by Jon Watt:

Above the ravine, in a narrow grassy valley, the path divides continuing with the stream to reach the Portezuela Lomas Blancas Arenales or turning right across the stream to ascend slopes to Cerro Andresito. (There was a sign here in February 2016).

Turning right, the path climbs a steep grassy slope to reach the summit cross of Cerro Andresito (3090m). Good views from here of Vallecitos valley and the foot hills of Cordon del Plata.

From Cerro Andresito the path heads north and then northeast up more grassy slopes but gradually giving way to screes and boulders to reach the summit cross of Cerro Arenales (3376m). If lucky Guanacos can be seen grazing on these slopes.

The ridge continues northwest dropping about 50m to meet Portezuelo Lomas Blancas Arenales before turning to the west to climb scree and occasional boulder fields to the summit of Cerro Lomas Blancas (3642m).

The route can continue further along the ridge to Cerro Estudiantes (3678m), Cerro Caucaso (3797m) and Cerro Iluso (3808m). This extension requires some easy scrambling.

Descent to Ref. San Bernardo is easiest by reversing the ascent route to reach the Portezuelo and then heading south to (re)join the stream which is followed back down into the grassy valley and thence to the ravine. Alternatively it is possible to follow the ridge from Cerro Lomas Blancas, which heads due south to reach the Vallecitos ski centre [descent time 1 hour].”

From the north and on El Salto side it can be assumed the mountain can also be accessed. Plausible routes are visible on Google Earth, but no trails are visible (in contrast to the southern or Vallecitos side, where lots of trails are visible) - but I have no further information. If anyone has information about northern approaches (or indeed anything else) please let me know or add as a correction.

The area is a national park – as evidenced by a sign passed low down on the dirt road up to the ski-field saying “Vallecitos Parque Natural”. There are no peak fees payable to climb these mountains but you are advised to sign in and out when you enter the National Park. There is a guardaparque office near to the Refugio San Antonio on the Ski field road. In February 2016 we did not know about its existence until on the way out of the park and the person giving us a lift showed us. This person had signed in but then found that when he went to sign out that the office was closed, although well within normal ‘office hours’ – which seemed to defeat the purpose of having it!

There was an official looking signing in book at Refugio San Bernardo and we had entered our particulars in that – and we let them know when were down, although not staying there on the way out of the national park. If staying at San Bernardo or one of the other refugios it is reasonable to assume that there is no need to sign in at the guardaparque office.

The mountain is a popular destination for summer walking but could be climbed at all times of year if prepared for much tougher and snowy conditions in the winter. In summer (In the southern hemisphere so we are talking November to March) the mountain can be climbed in shorts and a t-shirt and in walking boots or approach shoes – carrying a warm layer and a waterproof just in case… But in winter appropriate cold weather clothing, mountain boots and maybe even crampons and ice axe may be needed – and ascents could (and probably are) made on skis.

Being a large city Mendoza has an immense range of options from expensive hotels down to back-packers hostels and camp sites for those on a budget. In 2016 Condor Suites provided good middle of the range accommodation not far from the city center and with space to sort out expedition gear. In 2011 I also stayed at Independencia Hostel on Mitre Street just off Plaza Independencia, which was much more basic and correspondingly cheaper – but in 2016 seemed to have undergone an upgrade and a slight name change to Square Independencia (click to access the new website). 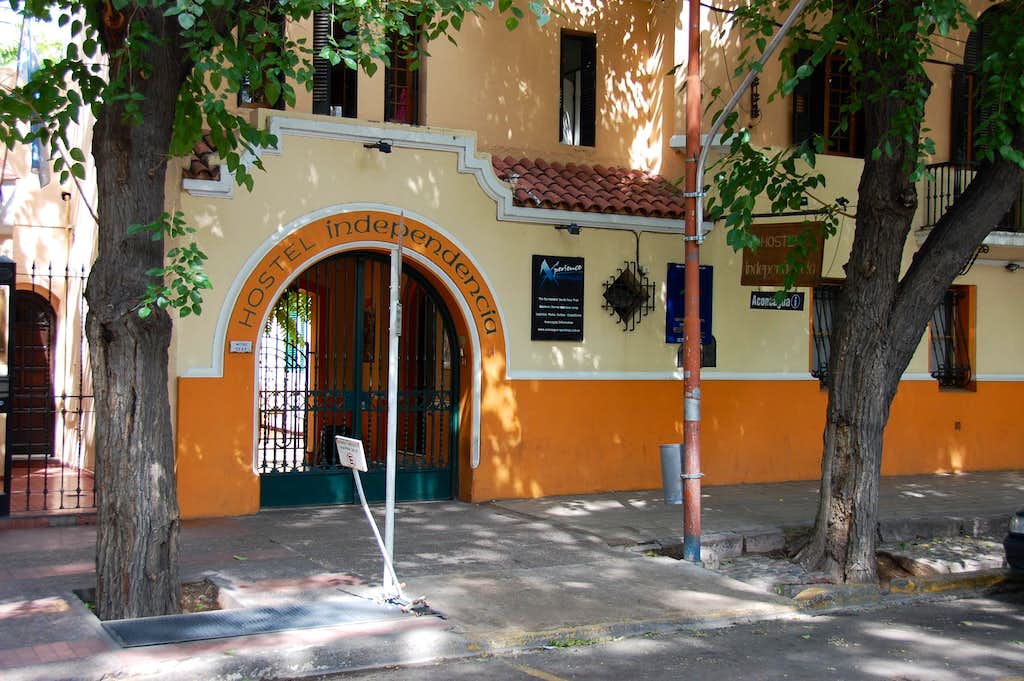 Hostel Independencia on Mitre Street, Mendoza - as it was in 2011. It has now been upgraded a little.

The villages of Uspallata, Potrerillos and Las Vegas are passed on route to the Vallecitos mountain/ski center. All have options varying from hotels, guest houses and camp sites – see links section below or simply google the names of the villages.

As above there are a number of refugio’s including San Antonio at 2600m, San Bernardo at 2800m and Mausy Shelter at 2900m.

Refugio San Bernardo at 2800m is ideally placed for climbing the Lomas Blancas tops and is also a good base from which to launch mini expeditions to climb the higher summits (see trip report – Cordon del Plata Expedition 2016). In 2016 the refugio seemed to be owned by Michel and Sandra Lanniaux who are based in France, but was actually run by Ali Crossili and his son Chapu and Ali’s partner Vivi. Various attempts to contact the Refugio by e-mail, on Facebook, via Trip Advisor were unsuccessful – but it seems the form is you just turn up! In February 2016 we received a very warm welcome from Ali and Vivi and various others who seemed to be connected to the place including Indio the extraordinary mountain climbing dog – who climbed Cerro San Bernardo 4142m with us and in addition (I found photographic evidence) climbed Cerro Plata 5962m a few years ago (see above link to trip report or to the San Bernardo website - or link below).

Note: these are basic costs - extras were very expensive e.g. a hot chocolate added ARS 200p (USD $14) to the bill - so keep track of things if you are on a budget! 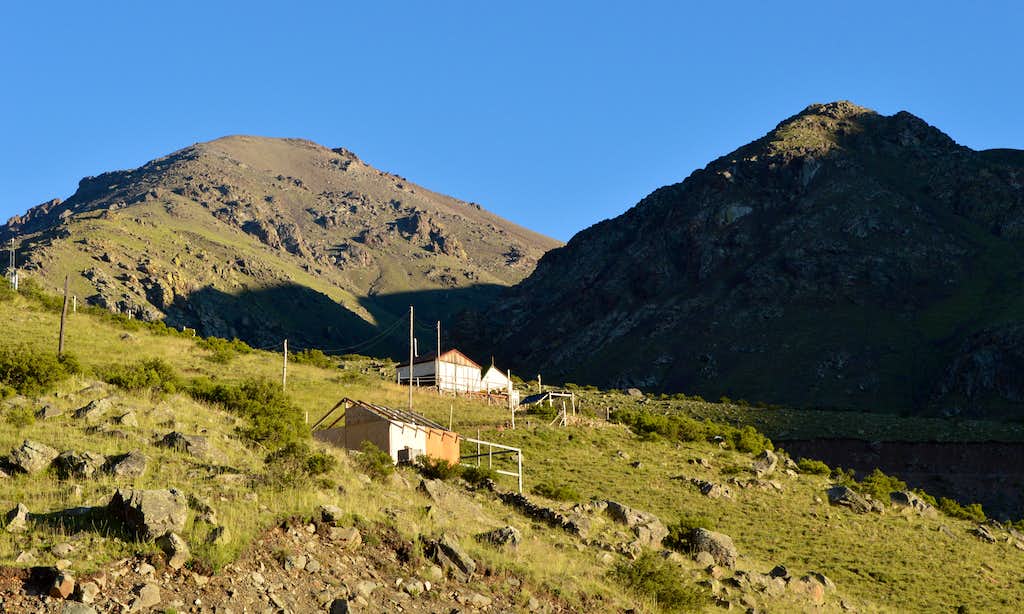 Lomas Blancas and Andresito in the early morning February 2016