Lone Mountain is not a classic. It is not the sentinel of the Las Vegas area. It’s not a climber’s paradise. You’re not going to find solitude or breathtaking wilderness views, and you certainly aren’t going to train for a marathon there. But this prominent little mountain, stuck all by itself out in the middle of the northwest portion of the Las Vegas valley, makes a fine mid-week conditioner and has more interesting routes on it than meet the eye.

Lone Mountain is a local’s mountain.

On a typical evening in the desert, you’ll find folks with dogs, spouses, and kids hiking the easy 1/2 mile use trail to the top of the peak. For those easily winded, there’s even a concrete bench about halfway up to rest on and take in the city scenes below. The graffiti on the summit contributes nicely to the urban feel of the peak, and those enthralled by the blinding neon of this impulsive city will be enamored of the view.

*In Fall/Winter 2005, 'No Trespassing' signs appeared along the open desert immediately adjacent to the west side of Lone Mountain (City of Las Vegas property). As of 1-22-06, there were no signs posted on the southeast side of the mountain (privately-owned property, I believe) or on the northeast side of the mountain, where a city park lies adjacent to the mountain. Now, I'm no attorney, but it appears that the mountain can still be legally (I hope) accessed from the city park. Although this page does not highlight a direct route description for that approach, I cannot imagine that a class 2-3 route would be hard to find. 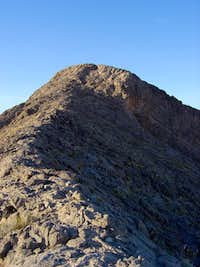 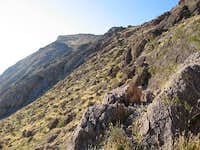 Considering how Las Vegas loves to grow, access to the mountain is easy – there’s a freeway (highway 215) groaning 15 feet (literally) from the mountain’s north ridge. Since there’s no exit leading directly to the mountain, I’ll give some surface street directions lending access to this residential mountain.

From I-95 in downtown Las Vegas, head north. Get off at the Cheyenne exit and head west. Continue to the intersection of Cheyenne and Durango, then turn right onto Durango. Follow Durango for a mile to Alexander. As you turn left onto Alexander and proceed toward the semi-impressive desert peaks in the distance, you’ll note the much smaller Lone Mountain in the foreground. Follow Alexander for a mile or two to the base of the mountain and then use surface streets appropriate to whichever access point you’re looking for. Navigation from this point is easy.

This route is accessed by a residential road on the mountain’s western side. This road, I forget the name, is easily found off of Alexander, and those with the most limited common sense will have little difficulty finding it. Follow the road north from Alexander for about a block until it becomes dirt. Park anywhere along here and look for a well-worn use trail coming down from a gully on the west side of the mountain’s north ridge.

Follow the use trail upward over scree and crumbling limestone to the summit. About halfway up is the aforementioned concrete bench – take a breather if you need to. At times the upper trail is apparent, but not obvious, and some minor class 2-ish type stuff may be encountered.

This effort requires a roundtrip of less than a mile, with about 600 feet of gain. Objective dangers include, but are not limited to, wiping out on a scree slip and skinning up the palms of your hands.

Oh yeah, when approaching this route, don’t be startled by all of the illegal dumping in the desert at the base of the peak – that’s par for the course in this town – just step over it and trudge on.

From either the access point mentioned for the standard route or from the city park on the mountain’s east side, make your way to the toe of the north ridge. The park is located on Jensen Drive, less than a mile north of Alexander.

Follow the ridge south over varying terrain, pass the concrete bench, and ultimately work your way on up to the top.

This route is too easy, and since highway 215 was built immediately next to the north tip of this ridge, it has lost virtually all of its appeal.

Although I’ve not done the entire presumably class 2-3 east ridge, which is approached from the county park on the east side of the mountain, this fun, non-direct variation features a short section of class 4 dry waterfall to overcome before it works its way to the crest of the ridge and up to the top.

From the south side of the county park, work your way to the base of the east ridge. From there, stay low and skirt along the south side of the ridge until you reach the base of a dry waterfall (about 60 feet high). Climb class 3-4 terrain straight up the waterfall, traversing to the left at the top, and then work your way up the route of least resistance to the crest of the east ridge above. Once there, you will find that you are about halfway to the summit already. Scurry the last few minutes to the top.

This is an enjoyable and fairly stimulating way to climb Lone Mountain.

The south ridge is obvious as you approach the mountain on Alexander. Find a place to mark somewhere on the shoulder of Alexander and start up the toe of the ridge.

For the most part, sticking to the crest of the ridge, the going is in the class 2 range, with occasional short class 3 sections. There are a couple sections of minor difficulty (to about 5.1) encountered along the route, one of which is at a sort of headwall about 2/3 way or more up the ridge. The climbing is easy, fairly, but not terrifyingly, exposed, and protectable, if desired. Route-finding is elementary.

There is an interesting keyhole-like feature about halfway along the ridge. Looking carefully, you may notice the fairly large limestone arch on the north side of the ridge. The arch is not along the route, but just barely off of it. It’s worth looking at, I think.

This route heads up the west face of the peak, as approached from the bowl between the west and south ridges, and contains about 200 feet of 4-5th class climbing. The face, if climbed directly, tops out on the summit, and is steep and exposed at around 5.7-5.8. The non-direct route follows the west face, but veers slightly to the right as the steepness gets severe about halfway up, ultimately bringing you out on the south ridge about 30 feet below the summit.

Any line will go, with varying degrees of difficulty.

The west ridge makes for an optimal descent from the west face route. From either direction (summit or base of the mountain), simply follow the obvious west ridge.

Most of the routes on this peak are sufficiently handled with a decent pair of hiking boots. Gloves might be a good idea, since the limestone is sharp. For routes of a technical nature, one might consider a rope and some pro, though the technical sections are short and typically easy (ie: lots of holds). The quality of the rock is questionable and generally unreliable.

Year round. Expect it to be uncomfortably hot in the summer, though.

There’s no water to speak of, so be sure to stop by any of the 85 nearby 7-11’s for some fluids before your hike/climb.

I doubt anyone would have a problem if you camped on this mountain, but why would you want to? Camp up at Mt. Charleston, or stay at one of the city’s 5,000 miserable casinos instead.

Mountain conditions are somewhat irrelevant in this context. It’s absurdly hot in the summer, but pleasant the rest of the year. Storms are rarely, if ever, a problem on this peak.

This mountain is comprised of limestone. Not the most reliable of rock materials, caution is advised on any of its climbing routes. 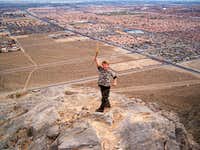 Hey there, Just yesterday I summitted Lone Mountain. I wanted to share some info to augument this section of your page: **North Ridge (class 2): From either the access point mentioned for the standard route or from the county park on the mountain’s east side (also accessed from a residential road heading north from Alexander), make your way to the toe of the north ridge. The little county park is located on Jensen Rd. Drivers can turn north from Alexander onto Jensen to access the parking at the little county park. Happy climbing, Sarah

Thanks for the clarification and updates, Sarah. I appreciate it. I've updated the page to reflect the information you provided. I'm glad you had a nice time on the mountain. CP