Looking back at the North... 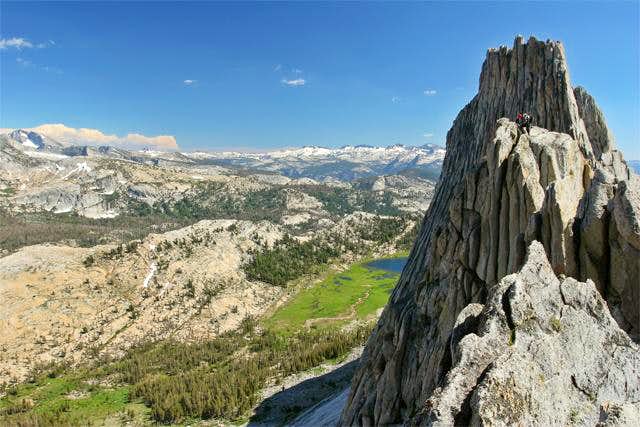 Looking back at the North summit from near the "wave" pitch. This is how the 2nd half of the traverse looks like. In general, it is much more exposed and committing than the 1st half (before the North summit). You can see two climbers who contemplate yet another exposed downclimb with questionable pro - July 23, 2005
« PREV NEXT »

Really need to climb this classic!

Thanks! Let me know when you're coming to do it. This will be at least an annual affair for me... love the climb so much!

Would it be better...

to rap this instead of downclimb?

There was one rap anchor available which we did not use. I think it was intended for bailing and not traversing since it was positioned on the outside of the ridge. There are no rap anchors or easy flakes for slings at the spot where these guys are if I remember correctly... Most of the time you are forced to downclimb sketchy sections.

I came from the other direction, but Misha describes that part of the traverse exactly how I remember it. There is rusty old piton up there, but that is most definitely not something I'd like to rap from.

Somebody placed a bolt next to that piton so it looks a bit better. By the time we came across that anchor, we were downclimb exposed stuff for so long so it did not make a big difference :)

Some of the cracks that we experienced on the way down from the North summit were as hard if not harder than the crack/chimney that you climb from the notch to the North summit (a move or two of 5.7-5.8). Sure they were pretty short but pretty awkward and sometimes overhanging. Not to mention that the landing was far from pretty. I am not trying to discourage anybody, but I think that one needs to be pretty solid on the exposed 5.7-5.8 terrain before following the ridge to the north of the main summit. Rappeling may help somewhat but not all the time.

BTW, it was nice running into you on Pywiack Dome, Jim!

You're old school, Jim and must still be used to old ratings :) I don't doubt that ratings grow over time. For instance, the crack move below the North summit felt marginally harder than the last pitch of Zee Tree, which is rated 5.7. Won't it make it at least 5.7 or is Zee Tree rated incorrectly? If you read a trip report of our own Bob Burd about his last Matthes Crest adventure, he also felt that that pitch was around 5.8. As we were downclimbing from the North summit, I purposefully paused after each sketchy downclimb to assess the difficulty if I have to climb back up. Some of them looked and felt harder than 5.7, at least to me. I can't compare it to old ratings since I was not climbing back then, but I can compare it to newer routes and recently assigned ratings. Either way, it is a moot point. If somebody wants to try it, they should, and make their own observation.

Seriously, I see your point and I hope that you see mine. There will always be debates about ratings since they are so subjective. I wonder what others who completed the route think and how they felt about the climb from the ratings perspective.

BTW, I was referring to the crack in the corner and specifically one or two moves right above the ledge; it eases off after that.

You captured the magik

Fantabulous shot. Just discovered it. Better late than never! BTW, your body of work here on SP is the bomb....