Looking up at the Cleavage... 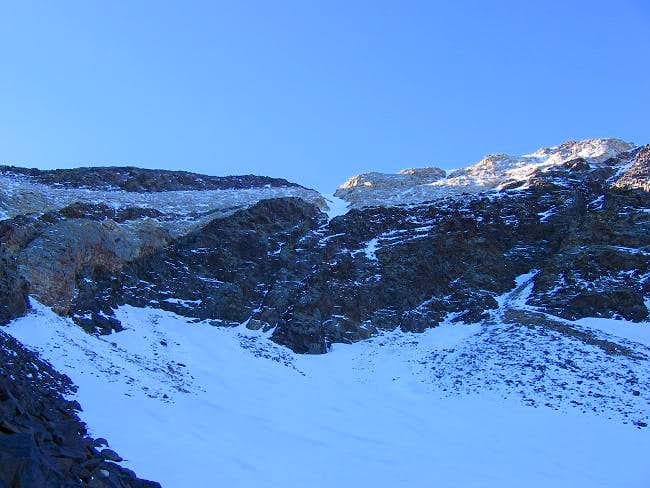 Looking up at the Cleavage Couloir, which is partially visible on the upper portion of the ridge at center, during the approach hike. Soon after this the couloir becomes hidden from view, so it is a good idea to note a few landmarks and mentally plot out a route up to the couloir.
October 21, 2005
« PREV NEXT »

How was the rock section leading up to the couloir? Climb rating? Quality of rock? Protection necessary?

The lower rock section was 4th class crap - lots of loose stuff. I was kind of (okay, very) nervous, and we nearly backed off at one point, but downclimbing seemed like an even scarier proposition so we pushed on.

We got a little off route, and ended up entering the couloir from the west, some distance above the bottom. Ideally you would stay further to the east and hopefully hit the bottom of the couloir. I think the approach climb would have been easier had it not been for the new snow - there wasn't much, but just enough to make things treacherous. We didn't have a rope, but kind of wished we did, or at least I wished :)

The couloir itself was a blast though, and really made up for the nasty lower part. It's a route I wouldn't mind repeating.

I think I'd like to give it a go...but in the spring. Hopefully that messy rock section has a nice layer of snow around April.