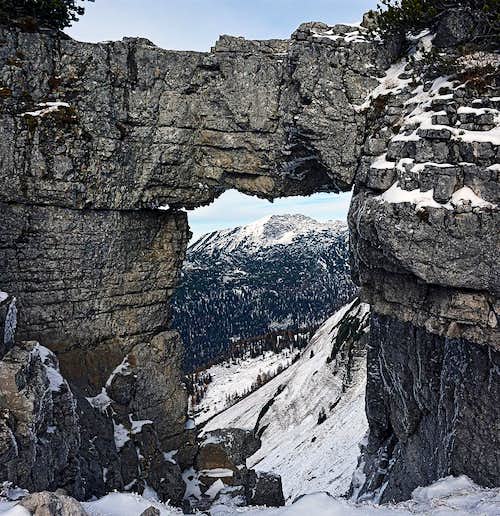 In the western part of Totes Gebirge (Dead Mountains) the big karstic plateaus of the massif slowly end with a few mountain ridges, going in the SW-NE direction. One of them is called Augstkamm and Loser like a picturesque castle rises on the most SW end of it. It is far from being the highest in the ridge, but its privileged position on the very end of it grants him big popularity. I can imagine that in summer it is rather a touristic than a mountaineering destination. As high on the mountain a good road reaches, care has been taken there for all kinds of outdoor activities. In snow-free season it's hiking, climbing by 2 vie ferrate, rock climbing, in winter and spring it's classical and tour skiing. In addition to the road high towards the summit also cable ways are reaching high, operating only in winter. The place is well known also by paragliding and the road offers also an interesting biking challenge.

It obviously has nothing to do with the English word 'loser'. In middle ages locals were climbing promotory mountains around their coutry to listen ('lose') if from the distant Enns valley the noise of battles could be heard. 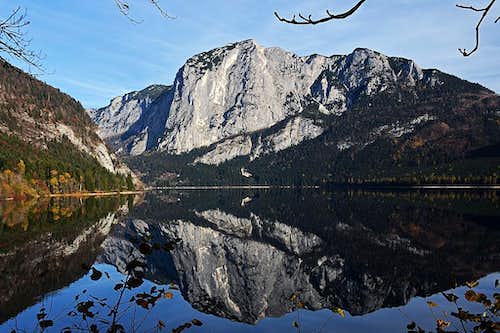 On the SW side of Totes Gebirge the landscape is especially beautiful. There's an undulated plateau with several quite big mountain lakes, receiving a lot of southern and western sun. That's why in Bad Aussee, which is the centre of that land, tourism started already early. And, guess what, nowadays it continues. I high season you can't avoid certain crowds, but moving a bit around you can still find nice lonely places. Most popular are hikes and bikings around the lakes and you can also visit a few corners with still well preserved architecture of the first farmers, fishermen and salt miners.

Loser is obviously made of limestone, as the majority of Northern Limestone Alps. But the limestone of Loser is a bit special. It is called Tressensteinkalk (Tressenstein is the hill south of Altaussee). It originates from the upper Jurassic time and is grey to sligtly brown.

Just east of the summit of Hochanger, in the main ridge there is a beautiful rock window. It is easily reachable (the marked path passes by), through the window you see nicely down in the valley of Gschwandalm and on the summit of Schoenberg above it. 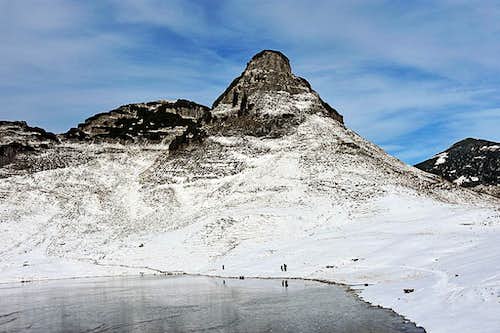 Reaching so high by the Loser road, it's worth visiting also some neighbouring mountains. Several combinations of tours will be mentioned later, here are just listed the nearby summits of Augstkamm. Loser has nice rock walls towards the S, W and NW. Towards the E the grassy and partially rocky slope is lowering more gently towards Loser Alm. Towards the NE a shallow saddle divides Loser from the Hochanger, 1838 m. On its northern side the walls continue, towards the all other sides the slopes lower from the summit dome more gently. Further to the NE the main ridge has very similar characteristics: precipituous NW walls and grassy, partly rocky SE slopes. Passing the Augstsee, the ridge starts turning towards the north. Out of the main ridge, on the eastern side of it, the picturesque tower of Atterkogel stands, 1826 m. The main ridge however rises to the northernmost summit of this small group, Greimuth, 1871 m. From there the main ridge continues towards the NE, where we should mention also Braeuningzinken, 1899 m. It is still close enough to add it into a round tour, combining visits of these summits. Other summits towards the NE are more remote, but offer some nice ski tours from the end of Loser road.

Due to the exposed position of Loser it is really broad and nice. At first, all views fly of course towards the Dachstein, the peaks of its crown and its glaciers. But nice is also the Gosaukamm, the range of wild peaks right of Dachstein. More to the west, the Northern Limestone Alps continue with the Tennengebirge. And from behind all these mountains we can see even a few highest summits of Hohe Tauern. Towards the NW and N we can overlook the whole Salzkammergut - the mountaneous land of many peaks and big lakes among them. Finally on the E there are the summits of Totes Gebirge. Grosser Priel, the highest one, is clearly distinguished, but also many others, rising from those endless karst plateaus. Finally, no less interesting are the views down on the Altausseer See and on the famous walls of Trisselwand, rising on the other side of the lake.

You can start the ascent on Loser and its neighbours either down by the lake, in Altaussee, 719 m, or you pay the toll for the road and drive up on Loser Alm, 1600 m. In winter time on the western side of Loser a system of cable ways starts. It can bring you even higher - first to the huts on the SE side of the mountain, then just below the summit of Hochanger. Online map: http://www.austrianmap.at

In the southern, western and northern walls of the small Loser group there are several not very high climbing routes. The base of those walls can be mostly reached from the mountain road, which is very convenient. You can start searching for some beta for example on the http://www.bergsteigen.com/ site (serch for 'Loser'). 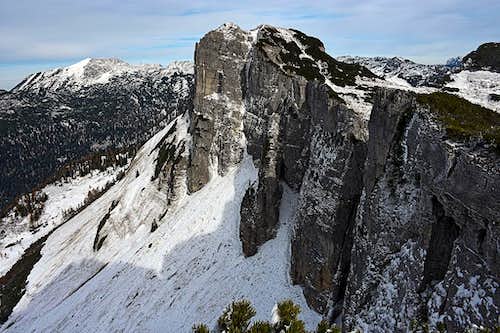 On the main ridge - Greimuth

1. Loser by the NE ridge. This is not the quickest ascent on Loser, but it's a smart idea to reach the summit by the beautiful main ridge and then descend directly towards the SE. We start the tour on the big last parking place, 1600 m. In a few minutes a rugged cart-road brings us in the NE direction to the nice Augstsee, 1643 m. Above it the Atterkogel towers. We continue by the marked path along the E shore and then deter right up, towards the north. We gain quite some altitude, then the path starts turning towards the W direction. There are a few steeper sections over some easy rocks, but generally the path is all the time easy and well marked. Through a short rocky ravine we gain some more altitude and (now in the SW direction) approach the upper ski station. Just above it, the path ascends up towards the main ridge and there is the famous Loser Rock Window. A cute bench invites for a short rest. From the window we continue along the main ridge. On a few places the path goes just on the ridge, offering great views on the N and W walls - towards the Greimuth. Then with slight ups and downs we walk to the dome of Hochanger and ascend it. The great panorama is already all seen, missing is only the view down on the lake. From Hochanger the marked path first descends some 40 meters on the broad saddle and on the other side goes gently up again - to the cross on Loser.

Difficulty: T2, 1 h - 1 h 15 min. Descent. To complete the round tour, we return towards the NE on the saddle and there deter right - in the southern direction. The marked path goes over an easy terrain and through easiest passages to the Loserhuette, 1504 m. Now you must go the last 100 m up by the road to reach the car. Not very attractive, but shorter than the ascent route is the variant which descends from below rock window directly southwards, reaching also the S end of Augstsee.

2. The NE summits. If you are ready to spend some more time and you want to avoid crowds, then start peak-bagging the summits on the NE of the group. From Augstsee continue towards the NE on Braeuningalm, 1607 m, there turn left and ascend by the path No. 257 Braeuningzinken, 1899 m. That one is also a nice tour skiing goal. Then start returning by the main ridge. That part is not marked, but you may be lucky to find weak beaten paths. Across the slopes you aim the saddle between Greimuth (on the right) and Atterkogel (on the left). On both summits you can reach without climbing, but some passages are exposed and require experiences. Greimuth is a bit easier. From the saddle between the two summits you then continue towards the SW, until you reach the marked path No. 256, described above in #1. Over Hochanger you continue on Loser and then return directly down on the road. Altogether you'll need some 6 hours.

3. Loser from the Altaussee. You leave your car on the big parking place and then start the ascent from the church. The path No. 254 goes first towards the NE, then in big turns through the woods towards the N. From many places you have great views down on the lake and on Trisselwand. After reaching the Loser road, you choose the option for summit ascent. Altogether you'll do some 1200 m of altitude, the route is an easy hike up.

As you have high trailheads available, you will most likely not need mountain huts to sleep there. Otherwise there are two available:

Parts of the narrow mountain group, including the summit of Loser, belong to the Preserved Natural Area Totes Gebirge. Excluded are the areas where the mountain road goes, ski tracks run and the area around Augstsee and towards Braeuningalm.