As in life, success on first attempts at difficult objectives is usually not achieved.  But sometimes, we defy the odds and hit the mark the first time.  Luck, planning, skill, perseverance - which is it?  Well, this is a report with a good mix of all of these ingredients, as well as the importance of being able to be flexible and most importantly to have fun at what you are doing.
For the purposes of this TR, the story starts on an Idaho Summits forum thread on April 23rd.  It starts out with a topic about the LRP South Towers route and ends up with a few people who don't know each other personally getting together via a Facebook group to do a climb.  (Luck??).

The original group size was five, but we lost two due to scheduling changes and conflicts.  Originally the plan was to depart Boise on Friday and hook up for the climb on Saturday AM.  However the Saturday weather report did not look good, and Sunday looked much better.  After some additional online debate, we determined that we would reset and do a Sunday climb on May 5th.  In addition, instead of two vehicles, we car-pooled with one vehicle.  Our first intent was to camp at the trail head, but then after Deb made the suggestion to stay in Mackay at the local motel, we jumped on that.  This allowed us to be well rested and get the start we wanted which was to be on the trail at 4:00 AM.  (Planning, flexibility??).

By the time we had started the climb, we had all become well acquainted and the camaraderie was evident during the entire round trip.  There were 9 people in three different groups on the mountain that day and we were first out and first on the summit.  (We actually were caught shortly after the false summit by a faster group, but they deferred and allowed us to continue ahead of them to the summit).  Depending on which TR you read, the ridge-line (.25 mi), from the false summit to the true summit is everything from a walk in the park, to a dicey proposition.  In our case, it leaned more towards the "dicey".  The compounding factor was the huge drifts and 4-6 inches of fresh windblown snow from the storm the previous day.  The ridge-line is very narrow, especially in a couple of places and this new snow made travel riskier, due to hidden rocks and cracks.  Oh, BTW, as has been mentioned in other TRs, this section as well as the entire Super Gully is a snow/crampon ascent during this time of year.  (Skill, perseverance??).

The descent had two components for our group.  I basically climb peaks to ski them, so I had my ski equipment and skied the entire SG from the false summit.  (Some have asked me if you could ski from the true summit and I would say it is possible given the proper combo of skill, guts and lack of fear/brains if you stayed under the ridge on the west face.  However, this is "fall you die" territory AND there is a huge drift right above you the entire way).  I suspect most do what I did and start at the false summit, or for some a bit further down in SG.  So, back to the descent.  Deb and Tom initially began the descent by plunge stepping, but shortly thereafter Tom convinced Deb to do the glissade technique.  After a quick lesson she was ready to go and had a blast the entire way down.  The snow ended about the 9,500 foot level this year,and that is where we did a quick gear change and transitioned to the hike out to the trail head.  We had a great trip, (including introducing me under protest to the Trail Creek "short-cut"), had a ton of fun, made new friendships and arrived back to our loved ones safely.  That is the key to success in the mountains and the fact that we were able to summit, (on the first attempt for all 3 of us) just added to the satisfaction of the accomplishment.  Below I have posted some pics of the ascent and descent, a video that features the ski descent and a link to my website, Hi-adventure.com which contains additional details and the GPS map/data for the adventure.
Key Stats:
Team: Cody, Deb & Tom
Start time: 4:10 AM
Finish time: 1:15 PM
Elevation gain: ~4,500 ft.
Weather/conditions: Clear to partly cloudy - fantastic.  Below freezing temps had the SG snow firm and ideal for climbing.  New snow was 3-5 inches, slightly windblown but adhered well to existing base.  Snow level in SG approximately 9,200 ft.

I have seen statements in many reports and TRs that put the pitch in the Super Gully at 45-50 degrees.  That did not seem to be the case to me, and so I did some calculations using the GPS data that I collected.  The results are as follows: 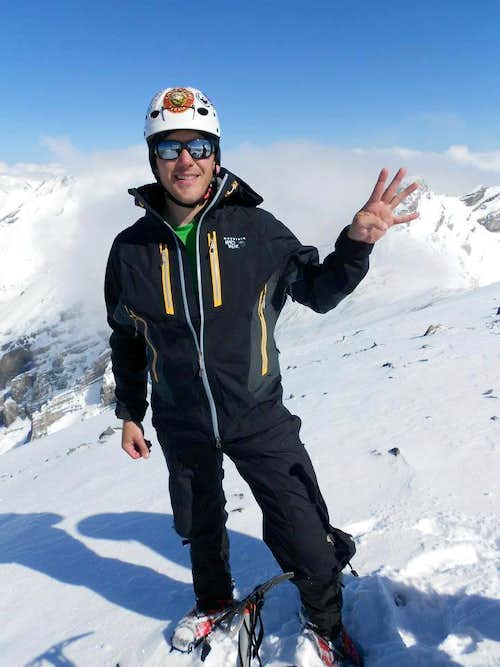 Thanks to Tom for putting the trip together. (This was his 4th Idaho 12er). 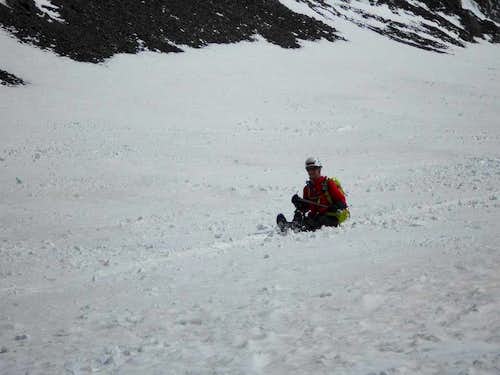 Deb enjoys the ride down! 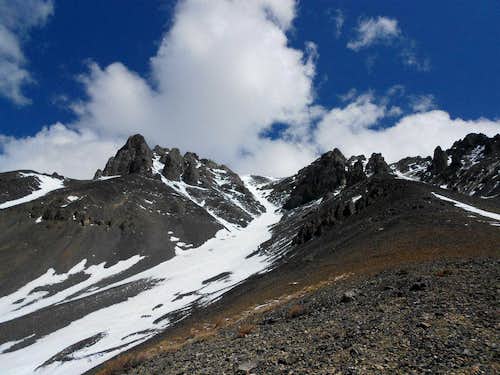