From the tiny island mountains of the Colorado Plateau, rain and precipitation form, running off into small rivers that eventually all merge with the Coloroado River.  These rivers all have small hydrobasins, base flows of 10-30 cfs on a flat course, and can flow through spectacular gorges and narrow canyons as evidence of their historic flow. 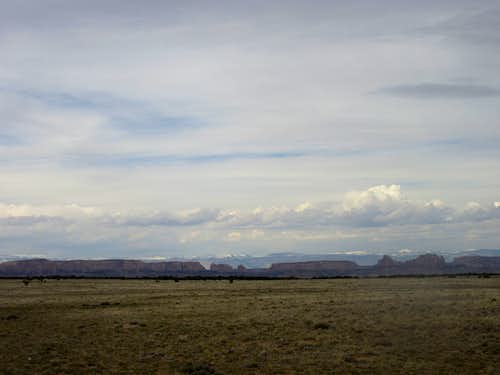 The range shown here, the Wasatch Plateau is at 9500-10500 feet.  It was first uplifted as the Mesocordilleran high approximately 250 mya. Its prominence is 2000-4000 feet or so above the plateau, including buttes.  The rivers originally formed as the Mesocordilleran high formed, tending slightly east, and as the San Rafael Swell later uplifted 40-60 mya, cut its course through it.  The rivers have a baseflow and then one-day precip runoff which can be 10-100 times greater.  These happen 5 or so times a year, when large storms are in the region, but take note of the weather before venturing there.  A link to current conditions, and to current flow levels, are important to check before going in. 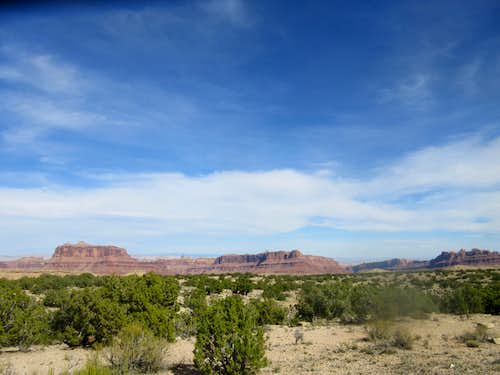 Large domes made in Wingate and Kayenta are above therim.  The narrows itself are very small, and nothing on the rim is visible once inside. Mexican Hat on the left, and the Black Dragon formation on the right.  Entrance to the Lower Black Box is just downstream of Mexican Hat, and flows all the way to the right to just before Black Dragon canyon, the end of the Lower Black Box being sulphur springs, where bright yellow suphur is visible in the sand.  Exit to the right, follow the road fromSinkhole Flat back to the car park.  Good climbing on the way out – plenty of class 3 to practice on if you’ve got time.

From the canyon floor, only the canyon walls are visible, 200-500 feet above.  The view will only be apparent when you float or swim all the way to the end of the black box, when you’re back on the rim.  Bring a hat, reef walkers, and waterproof your gear with a drybag or several plasticbags.  There is not much sun in the gorge, but it is like the Grand Canyon in that the bottom is warmer than therim.  In addition, the water temp is warmer than glacial-melt water in the Colorado River, and water temp can befound at the link above for river conditions. I don’t have any pictures of this section, since I didn’t bring my camera, but a photo of a similar swimming canyon, Muddy Creek, is at the bottom for comparison.

There are few places with such nice flow – you can swim in it, and there is never much of a current. A few short pools can be floated through and larger sections can be swum.

Now, for the pools themselves.  These are cool, with swimming pools in between rifles, and gentle cascades. Again, the water isn’t snowmelt, its at 4500 feet, and very tolerable. It does take some guts. You’ll be floating down pools in narrow gorges and then find a sandbank to climb on.  Or climb down a cascades ,to walk in knee-deep or waist-deep water. Its truly a privilege being in water this nice.

Consult Kelsey for driving directions to trailhead.  I found some of the road impassable for a non-high clearance vehicle, and opted to stay on Jackass Bench and hike anapproach of 6-8 miles both ways.  The approach makes this hike/swim well worth the effort.  The water is very cooling after a 6-8 mile approach.  On arriving at Swazy’s Leap, we found a route down to the rim and promptly entered the water.  It was clear, green, and cool but not cold.  The water channels through sand, across gravel, and where silt is stored, it is held in deep pools as river bottoms tend to undulate.  The water always moves very slowly, and this would be a great place to bring someone that just likes the water.  The pools you can float through, they are 100 – 200 m, some places swimming is helpful to movethrough. The whole Lower Black Box is 2-3 miles in length. Water pours over huge rocks, around boulders, and through cascades. Again, you pick your own route. There are always easier ways to get down sections than the main cascade.

I hope these words convey the sense of grandeur of floating through a mellow running gorge, with steep walls of cococino, with very little elevation change. I recommend checking out the exit point on arrival, so you know what to look for from the Lower Box. It's the first red formations visible from the narrow gorge, the longfin of Black Dragon canyon.  From here,the river starts heading east, out of the canyon, so be sure to exit here.

If you’ve ever been to rivers such as the Colorado River onthe Grand Canyon, or even the Green River in Canyonlands, you know the sense of scale that a river carves out of the landscape. However, these rivers are not swimmable. They have base flows of 5000 cfs, and can not be crossed by swimming, only by boating.  To sit at their edge can be a little boring, since they aren’t swimmable.  So if you’ve ever had that experience, this river is for you.  This is a superb dayouting not too far from the reef, and is well worth the time to travel and visit.

To give a sense of scale, I’m including photos of a similar waterway, Muddy Creek, also running from the Wasatch Plateau through the San Rafael Reef.  These show the water at 20cfs or so, which is an easy scale for floating, wading, and swimming. They're probably swimmable at much higher levels, 50-80.  Note, water temp makes a difference if you spend the day swimming.  That is reported on the conditions link above. 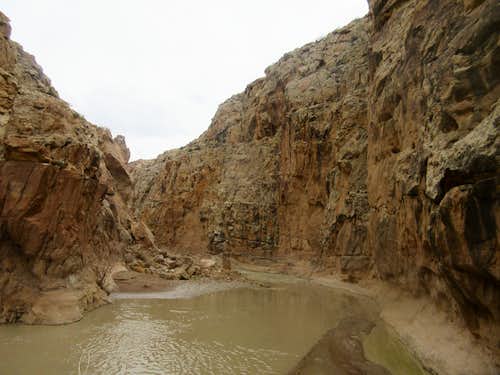 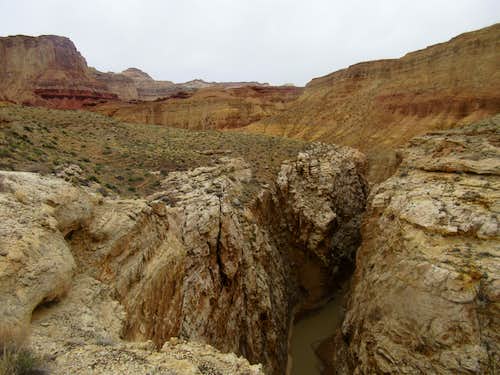