Luboń Wielki, a 1,022 metre (3,354 feet) tall mountain, part of the Beskid Wyspowy (Island Beskids) range is the closest peak to Kraków which is taller than 1,000 metres. To the north of Luboń Wielki are the villages of Glisne and Tenczyn, to the south of Luboń Wielki is the resort town of Rabka-Zdrój. 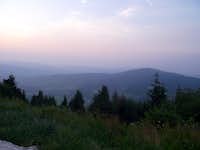 Szczebel seen from the summit of Luboń Wielki in the evening.
Follow Droga Krajowa 7 from Kraków south to Tenczyn, and turn left at the petrol station. Climb the road until the Glisne pass (634 metres / 2,080 feet), and park besides the road near the sign informing you you’ve entered powiat limanowski (Limanowa County). Though not an official parking place, hikers park here often and as long as common courtesy towards the locals is observed, there is no problem parking alongside the road here.

To reach the summit of Luboń Wielki one should travel south, along an, at first dirt road, later turning trail marked in red. There is a chance of encountering small dogs at first, as the trail goes alongside some farmsteads, but these will only bark as it’s their job to alert the farmers of people.
The trail climbs moderately at first through the fields. By the time you reach the tree line however, this trail will start climbing seriously, and as a matter of fact, from here on the trail climbs 300 metres (1000 feet) over the course of less than 1 kilometres (slightly over half a mile). There are plenty of breaks in the trees to your right, and when the weather is good, you will have a beautiful view over part of the Raba Valley including Lubień and Pcim.

Once you reach the top of Luboń Wielki, the trail widens again, and runs in the direction of the PTTK hut. The summit, a rounded hilltop covered in trees with a radio tower on top, is not very spectacular; its main claim to fame being the fact it’s the closest 1,000-metre mountain from Kraków. However, it does make a good hike for whoever wants to experience the Polish mountains but does not have much time to spend. The PTTK hut on the summit, run by Krzysiek and Agata Knofliczek, is open until about 20:00 and also offers accommodation. They speak a little bit of English, but during the summer season there is always some other people there working. However, after a long day in the city, this is a great place to relax and enjoy the views while drinking a beer. There is also another cave to explore alongside the yellow trail towards Rabka-Zaryte (a subdivision of Rabka-Zdrój), 10 minutes down from the summit. In total, the hike to Luboń Wielki from Glisne and back will take about 90 minutes, without the beer on the summit.

For those who come by bus, it’s possible to do a one-way trip taking Szczebel as well as Luboń Wielki, plus the descent along the long western ridge of Luboń Wielki.
Lubień is the last town along the S7 motorway, before highway 7 becomes a single-carriageway. At the motorway ramp for Lubień, depart the bus, and follow the black trail up Szczebel. This trail, after following road 968 for about 20 minutes, will take you up the north side of Szczebel passing the cave mentioned before your right-hand side. At the summit of Szczebel, follow the green trail down to Glisne and from there the red trail, mentioned before, to Luboń Wielki. Depending on your level of fitness and your speed, this should take anywhere from 3 to 5 hours from Lubień.
Instead of turning back at Luboń Wielki, you carry on following the blue trail towards the pass at Mały Luboń, which will descend rather slowly over the course of the next two hours towards the road. Roughly at the half-way point of your descent, there is a small wooden cross erected in memory of a helicopter crash here in 1985. From here, it’s still about one hour down to the pass.
At the pass at Mały Luboń, there is a bus stop where buses to both Kraków as well as Nowy Targ and Zakopane stop. To find more information about bus times, you can go to the website of the Kraków bus terminal, and make sure you enter “Naprawa” as the place of departure. Or go to the website of Rab-Bus, they operate the buses to both Naprawa as well as Lubień. Most of the fast buses to Nowy Targ and Zakopane operated by PKS or Szwagropol don’t stop at these places.

Looking towards the Raba Valley from Luboń  Wielki

Although it's possible to camp at Luboń Wielki, the mountain itself is not much of a camping destination due to its proximity to Kraków. Very little of the mountain is protected, so you will likely share the trails with an ATV or two on your way up.

For those that are interested in spending the night at the mountain, and watching a beautiful sunrise over Beskid Wyspowy during the summer, it's advisable to stay at the PTTK hostel on the summit.

IMO especially the photo of the hut deserves to be displayed here. Some would say it's actually the hut that features the mountain.