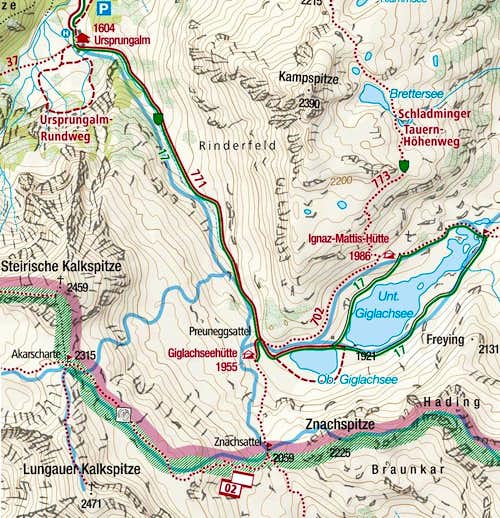 In the western part of Schladminger Tauern there are a few mountains which geologically belong to the more to the west lying group of Radstaedter Tauern. Here, I will briefly describe the pair of Lungauer Kalkspitze, 2471 m, and Steirische Kalkspitze, 2459 m. As their name suggests, they are on top built predominantly of limestone.

The whole area is well worth of a visit. The highlight of it is certainly the beautiful Giglachsee, one of the most beautiful lakes of Styria. We got trapped and commited to visit it when once we saw a picture of its small island, on which a lonesome larch is growing. But our first attempt one November was not successful. The lake lies on the altitude of 1921 m, and even on the mountain road there was so much ice, that it was hard to walk up. And the day ended, anyway. Nice is also the most popular trailhead for visiting the area. It's Ursprungalm, 1604 m. The alpine meadow is incredibly picturesque, even if nowadays most of the huts must be weekend huts.

The pair of Steirische and Lungauer Kalkspitze is rising quite close to each other. The Steirische Kalkspitze stands just south of Ursprungalm, the Lungauer Kalkspitze a bit more to the south. The higher summit of the pair is easily reachable and is also a tour ski summit. The lower one is a bit harder to reach, the short ascent from the saddle between the two requires an experienced hiker with a safe step and absence of vertigo. Between the two peaks is the Akarscharte, 2315 m, where marked paths reach from the east (from Giglachsee) and from the west (from Oberhuettensee). The latter one lies just below the saddle (Oberhuettensattle, 1866 m), which connects two long valleys west and south of our group: Forstautal and Weisspriachtal. In summer the whole area is very popular with hikers. None of the two summits is suitable for harder climbing. In winter and spring there are wonderful terrains for tour skiing. The two Giglach lakes are also a well desired goal of mountain bikers. But the final ascent is very steep.

There are two lakes with this name, Unterer (lower) and Oberer (upper) Giglachsee. As they are lying close to each other, the altitude difference between them is minimal. The lakes are the source of Giglachbach, the creek, which is flowing out of the lower lake towards the northeast, and then on Holdalm, 1062 m, joining the Obertalbach. Just west of the upper lake there's the Preuneggsattel, 1947 m, connecting the Giglachtal and the Preuneggtal. Both lakes are very nice and by themselves worth of a trip. Very nice is the easy hike which goes around both of them. The lower lake is much bigger, its coast is partially grassy, partially there are small rock massifs, mostly overgrown with bushes. There are many meadows around the lake, but its most beautiful feature is a small island. There only one a bit stronger larch tree growing on it, and a couple of swiss pine trees. Everything looks like a nice garden. The upper lake is mostly surrounded by alpine pastures, where in summer a herd of cows is grazing. On its western shore there is an interesting landscape - many picturesque small ponds are scattered on a wetland.

From the parking place we go to the nearby group of huts and through the 'village' by a narrow mountain road, closed for public traffic, further towards the southeast. A pleasant hike (but steep for bikers) brings us in 1 hour on the Preuneggsattel, 1947 m. On the other side there are the two lakes and the Giglachseehuette, 1955 m.

On the crossroads we turn right, pass the hut and continue by an easy, marked path towards the south. In anothr 15 minutes of a gentle ascent we reach the Znachsattel, 2059 m. Over it you would descend into Znachtal and further into Weisspriachtal, but to ascend the Lungauer and Steirische Kalkspitze, we turn right and ascend further towards the west.

From the saddle we start gaining some more altitude by a path, going up in turns. More above, it gains a side ridge, rising gently towards the northwest. Between it and the main ridge of Lungauer kalkspitze there a shallow valley. Hiking up by this side ridge is nice, as the views towards the east, down on the lakes, are really joyful. So we gain without much effort the Akarscharte, 2315 m, dividing our two summits.

On the saddle, we turn left again (for Lungauer Kalkspitze). A rounded, only in the beginning a bit steeper north ridge brings us in some 20 minutes on the panoramic summit. The whole route is easy (T2 on the Swiss Hiking Scale), from the parking place less than 2 h 30 min.

The parking place, 1060 m, is where towards the southwest the side Giglach valley is branching. A well beaten trail (in the distant past much used by miners) leads us up the valley. In the upper part it becomes steeper. It passes the Landauersee and then by a more gentle valley the lower Giglachsee. From there we go by the shore to Giglachseehuette and further on top, as described in #1. Some 4 h 30 min.

From the parking place in Weisspriachtal, 1148 m, we continue by the valley up, till it branches. From there, to summit the Lungauer Kalkspitze, the shortest route is right, by the valley of Znachbach. In some 2 hours it brings us on Znachsattel, 2059 m, where we join the route #1. Some 4 h to the summit.

We start on 1738 m, ascend towards the north first the Seekarscharte, 2022 m, but from there we must descend, going by the Tauernhoehenweg (No. 702) towards the northeast. We first reach the Oberhuettensattel, 1866 m, and from there continue in the same direction on the Akarscharte, 2315 m. From there by the route #1 towards the right in 20 min on the top. Some 4 h altogether.

From the parking place, 1380 m, we continue by the road, which starts ascending steeply towards the east. In good 1 h we reach the Oberhuette, 1845 m, and from there continue eastwards on the Akarscharte, 2315 m, and further on the top. Some 3 h altogether.

Lower in the surrounding valley there are many mountain huts, but by the ascent routes on the Lungauer Kalkspitze, these are worth mentioning:

There are no special restrictions in the area, only some mountain roads are payable. For example, for the road by the Preuneggtal, which however brings you on 1600 m, you need to pay 4 EUR per person. For eventual other payable roads, I don't have detailed information.

If you have information, please add it, especially something about this: