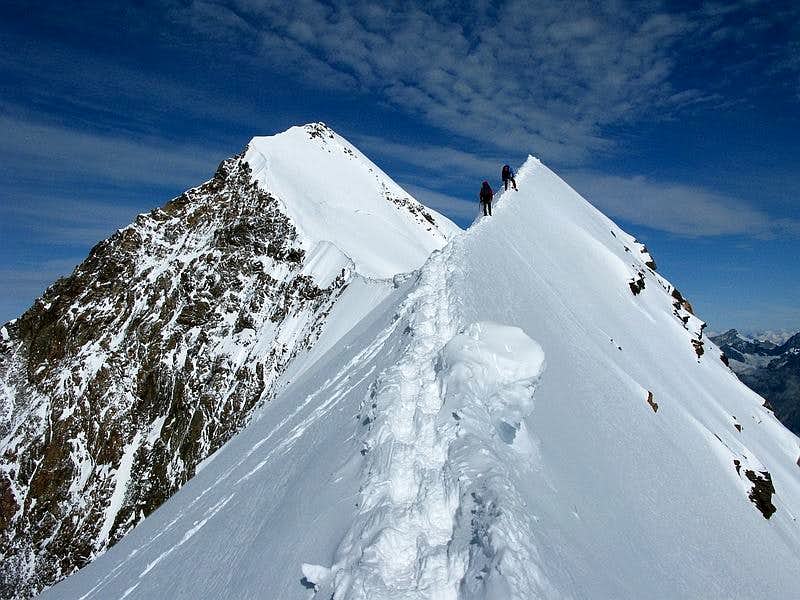 Climbers on exposed east ridge of Lyskamm mountain on Monte Rosa massif. In the background is east summit which is 4.527 mtrs high. - Pennine Alps - Aug 2011.
« PREV NEXT »

...mountain photo. Please keep it up!

...all for your nice comments!

Love everything about it.

I will try to climb it this weekend...if the weather holds...

Great picture of the Man Eater!

Something dramatic happened in September 1877 when they reached the second uphill section: Charles Gos tells in his “Alpine Tragedy”:

"The snow is good. They find it easy to place their feet, which bite into the crust of sparkling crystal. But are they not drifting too far from the crest? To assess the thickness of the cornice and to estimate the extent of its overhang they should be below it, or lower down, at a point clear of snow. But they are above it. Now it is just at this point that very thin fissures begin to run parallel to the cornice at the edge of the crest, blue serpentine lines on white snow. They are too far to the left, completely above the overhang. The five fleeing men never reach the edge. For them it is all over. For suddenly, some ten feet from the arête, the snow beneath them moves and slips away, like a ship sinking in the trough of a wave. They are swallowed up in a flash and vanish into the abyss of the Italian side in a cloud of snow and ice."

Accidents still happen on this mountain and are even witnessed by SP-members as described in this trip report by as: Lyskamm traverse.