Mackay Peak is located in the White Knob Mountains of central Idaho. 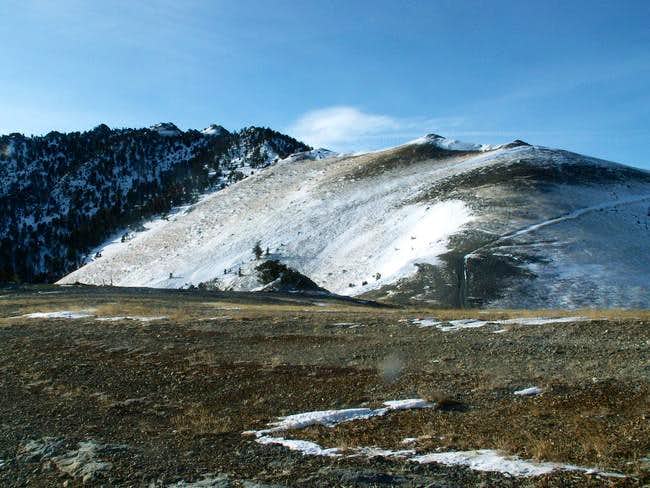 Mackay Peak is situated at the northern end of the highest and most impressive divide in the range. It towers over the Big Lost River Valley and the nearby township of Mackay. The peak and the town are named for Clarence Mackay of whom was one of the original owners of the White Knob Copper Company. The lower and middle slopes of Mackay Peak have been mined extensively and in some cases have been turned historical monuments with dedications and all. Dozens of old mining roads still criss-cross the mountain with some still open to motorized use. Along with the old remains, two ghost towns can be found at the base of Mackay Peak, Cliff and White Knob, both of which have been out of operation for nearly 100 years. It is not apparent from the valley floor, but Mackay Peak is a triple summited mountain. There is some debate as to which is the highest but they are all nearly equal in height. Mackay Peak's overall appearence differs drastically from the other White Knob Mountains. While the majority of the White Knob Peaks are barren and windswept, Mackay Peak is tree covered rugged piece of rock. When viewed from the south it is easily recognized by two prominent avalanche chutes that its face. Upon closer inspection, Mackay Peak's upper slopes are maze of granite rock outcroppings which, by Idaho standards, are comprised of suprisingly solid rock. Because of its prominence along the Big Lost River Valley and easy year-round access, Mackay Peak may be one the most visited White Knob Summit. For those who wish to view the Lost River Range before tackling the area, the summit of Mackay offers the best views of the central and southern crest of any spot in Idaho. A class II, borderline classs III, leads to the craggy summit.

For access to the standard route up Mackay Peak from Arco, Idaho, drive north on Highway 93 for rougly 25 miles until reaching the town of Mackay. Turn left (west) on Main Street in downtown and follow the road until it becomes the Rio Grande Road. This improved dirt road will lead to the base of Mackay Peak's east face within a matter of minutes. From here, several roads will branch from the main road. Four wheel drive is recommended at this spot as the roads deteriorate in condition. Take a good local TOPO map and drive as far as you can onto the northern slopes of Mackay Peak.

No permits required. The extensive mining digs found on the slopes can be dangerous if explored without authority. Some of the old buildings have become designated landmarks but check with local personal before exploring even these. The Rio Grande Road is plowed to within 2 miles of the Horseshoe Mine year round. Otherwise, a designated snowmobile loop has been created on the upper portion of the road.

Mackay Peak is likely climbed the most during the summer months when four-wheelers can drive high up onto its slopes and then continue by foot to the summit. A winter ascent allows for more a mountainous adventure. While deep snows may impeed some at the base of the peak, once on its high, wind-blown, ridges, those who perservere to the summit get the rare experience of reaching a 10,000'+ Idaho Peak in winter.

Camping areas are not plentiful in this region. No campgrounds are located nearby and the rugged nature of the terrain isn't compatable for tent camping. Mackay has a few hotels that are only minutes from the trailhead.

Mackay Peak, located in the rainshadow of the nearby Pioneer Mountains, does not recieve as much precipitation as other ranges nearby. However, the terrain is highly exposed to the elements and, as nearby Windy Devil Pass indicates, is subject to strong seasonal winds. The following websites will provide the best information as to the conditions in and around Mackay Peak as there are no nearby reporting weather stations.