Makalu, the world's fifth highest peak in the world rising to 27,765 feet (8,463 meters). This beautiful and impressive massive is situated just 14 miles east of Everest in the Khumbu region. Its size alone is impressive, but its perfect pyramid structure with four sharp ridges makes this mountain all the more spectacular. Makalu is actually a double peak. The subsidary peak rising just north of the main summit connected by a saddle is called Chomolonzo (25,650 ft.) It is interesting to note that the summit ridge is the demarcation point indicating the border between Nepal on the Southern side and Tibet to the North.

The name of the mountain was probably taken from the Sanskrit word Maha-Kala, which means Big Black and is a by-name of Shiva - one of the most important gods of Hinduism. Shiva is sometimes an evil, cruel destroyer but at other times he tends to be gentle and kind-hearted. The mountain has another name in the local dialect - Kumba karna, which means The Giant.

Makalu has proved to be a challenging climb, as only five of its first sixteen attempts were successful. To date, there have been a total of 206 successful ascents of Makalu and a total of 22 fatalities.

Prior to its first ascent in 1955, it was admired and studied by several Everest expeditions, but like a lot of other giants in the Khumbu region, it was not attempted until the summit of Everest was first ascended in 1953. 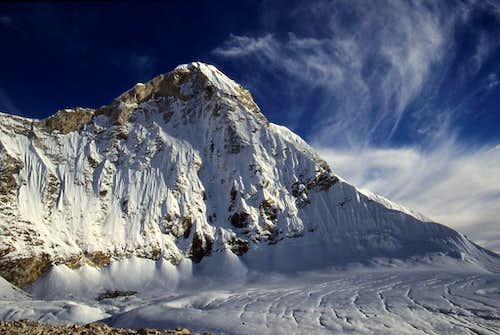 Makalu is situated in the Makalu-Barun National Park and Conservation Area which was established in 1992 as Nepal's eighth national park and the first to include an adjacent inhabited conservation area as a buffer. Covering 2,330 sq km, Makalu-Barun is a vital component of the greater Mount Everest ecosystem which includes Nepal's 1,148 sq km Sagarmatha National Park to the west and the 35,000 sq km Qomolangma Nature Reserve in Occupied Tibet to the north. Most of the Makalu-Barun National Park is a remote wilderness, with just two small settlements and seasonal herding in high pastures. The incredibly steep topography and abundant monsoon rains (1000 to 4000 nm per year) of the eastern Himalaya support unusually diverse bioclimatic zones and a rich store house of medicinal and useful plants. Alpine pastures above 4000m contian the religiously important dwarf rhododendron and juniper, aromatic herbs and delicate wildflowers. Sub-alpine forests of fir, birch, and rhododendron, and temperate stands of oak, maple and magnolia thrive between 2-4000m. Luxuriant orchids drape the chestnut and pine forests of the subtropical zone (1-2000m), and sal forests reach their northernmost limit within Nepal along the banks of the Arun (below 1000m).

For the naturalist, Makalu-Barun area provides spectacular displays of wild flowers and exotic plants. More than 3000 species of flowering plants, with hundreds of orchid varieties, 48 primroses, and 25 of Nepal's 30 rhododendrons splash the hillsides with color. The forests shelter abundant wildlife, including the endangered red panda and muskdeer as well as the ghoral, Himalayan tahr and leopard. Ornithologists have identified 400 bird species, at least 16 of which are extremely rare.