Malka Maljovica and Maljovica as seen from the trail, close to the hut

Maljovica is not among the highest peaks in Bulgaria but it's probably the most visited and most beloved one. The whole North-Western part of Rila bears its name, even though the highest peak in this region is Goljam Kupen (2731 m).

The peak has very different outlook depending on the place you're looking from. Its most spectacular face is seen from the valley of Maljovica river. From there you can see the nearly perfect pyramid of Malka Maljovica (Small Maljovica) and the sheer North face of Maljovica, the most important climbing site in Bulgaria and the true symbol of Bulgarian mountaineering. The southern slopes of the peak are not particularly steep and are almost entirely covered with alpine grass. The Eastern face encircles part of the glacial cirque that holds the Elenski (or Elenini) lakes.

You can reach Maljovica from three convenient centres:

There's a 26-km asphalt road from the town of Samokov to the Central Mountaineering School. Leave your car there and go on by foot, the hut is about an hour away. From there the trails are marked well and you won't have problems with directions in clear weather.

There is a good, signed asphalt road off the main road from Sofia to the southern border checkpoint of Kulata that passes through the town of Rila and then leads straight to the monastery’s gates. The hike starts from there and passes through the valley of the Drushljavica river. It takes about 4 hours to reach Mt. Damga and from there the route converges with the path from the Seven Lakes ciruqe.

Take the road from Sapareva Banja to Panichishte (make sure you visit the geysir in Sapareva Banja first!). From there hike to the "Rila Lakes" hut (3-4 hours). This area is really beautiful but it might be crowded in August. Once you visit the lakes, get on the high ridge and head to the East. After a while you'll find yourself on the summit of Maljovica.

No permits or summit fees required, no seasonal closures, no parking fees.

Maljovica is situated in the Rila National Park, so there are special rules regarding environment and wildlife.
Visit http://www.rilanationalpark.org/en/index.phtml for more information.

Summer is the high season for normal hiking. It may snow at any time of the year (even during July and August) but usually the snow cover lasts from November till July. The weather is particularly stable in September and October.

WARNING: There's serious avalanche risk around this mountain during winter and spring. You must know and follow the avalanche safety rules. During summer beware of slippery firn fields, rockfalls and deteriorating weather. Avoid going on your own.

There are numerous huts and shelters in this part of the mountain.
Conditions vary but are usually good for the price (3-5 euro per nigh for the huts).

According to the rules of Rila National Park you may use tents only on special sites, around the huts. That does not apply for cases of unplanned bivouacking. However, in the context of the large-scale cutting down of forests and growing ski resorts, these rules seem questionable. 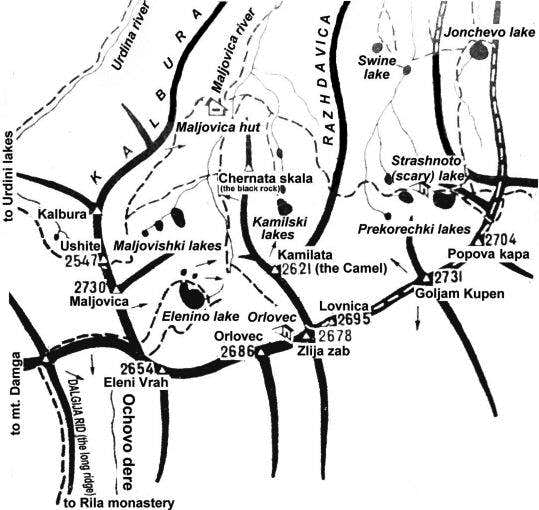 Maljovica is not an isolated peak even though it's dominating over the others. The entire ridge is full of interesting peaks with steep rock walls, ideal for trad climbing. The area is not less interesting for hiking-oriented people, with its glacial cirques full of lakes. 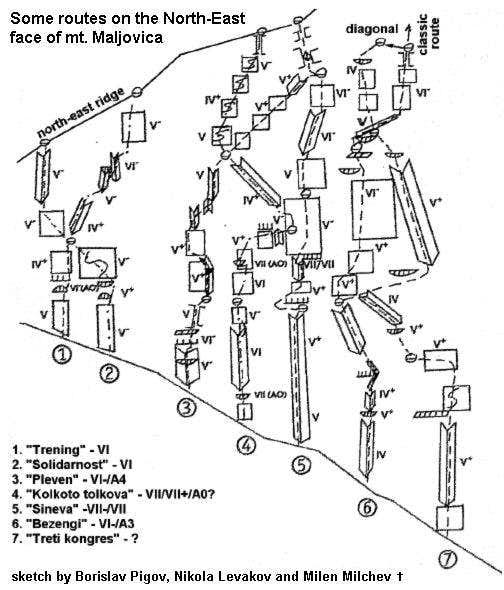 The North-East face is the most technical part of the mountain. It's usually referred to simply as "The North face of Maljovica". The relative height of this nearly vertical wall is about 300 metres. It's built mainly of granite, with some patches of schist and gneiss.

The wall was climbed for the first time on 21-22 August 1938 by Kostadin Savadzhiev and Georgi Stoimenov. This ascent is considered one of the milestones of Bulgarian mountaineering.
The first winter ascent of the North face was made in 1959 by Georgi Atanasov and Sandju Beshev.

For more information about climbing routes on Maljovica and in the area, please go to this site:
http://www.climbingguidebg.com/cdb.php?f=placeinfo&idPlace=4


The Name and The Legend

There's a legend relating the name of the mountain to a historic person:

On the way to Ovnarsko, where the road enters a pine forest, is situated the "Mokro livage" locality, through which Lopushka river flows. Close to the river there are traces of the old village Nadarica, whose residents were brutally mistreated during the Turkish slavery (XV-XIX c.). A young man from the village called Maljo, supposedly a descendant of an old noble Bulgarian family, started to avenge for the crimes against his fellow villagers. The Turks chased him for years but he knew the valley well and always managed to escape. Eventually he was captured when his lair was discovered, and he was killed.
When the old "Maljovica" hut was built a huge pine tree was cut and in its roots they found a well-preserved skeleton of a heavily built man wearing a wide leather belt with decorations made of copper. That is believed to be the grave of Maljo the outlaw.

This page on the website of the Bulgarian Mountain Rescue Service has up to date information but unfortunately it's only in Bulgarian:
http://pss.bglink.net/vremeto/region.php?region_id=2

The correct transliteration of this peak should be "Malyovitsa"!