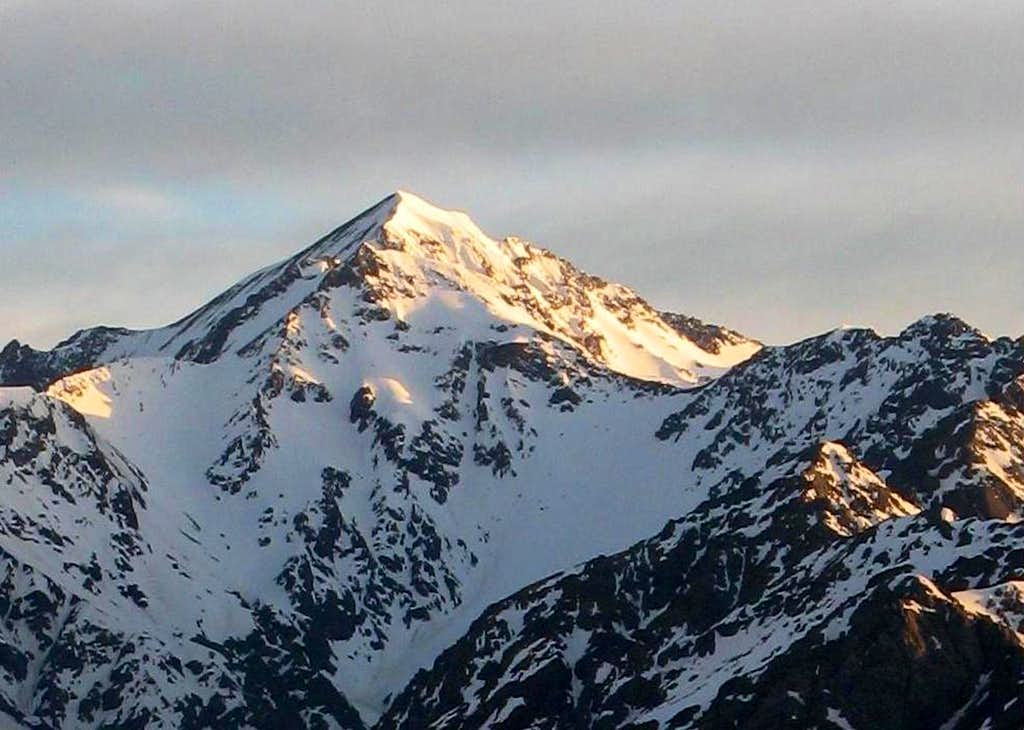 Manakau viewed from Mount Fyffe
Manakau is the highest peak in the Seaward Kaikoura range. It stands tall above the coastal town of Kaikoura and creates an impressive alpine backdrop along the sea. It is one of only ten NZ ultra prominence peaks (over 1500 meters of prominence). The first recorded ascent was made by James Ingram in 1874. Currently it might see only a couple ascents each year. 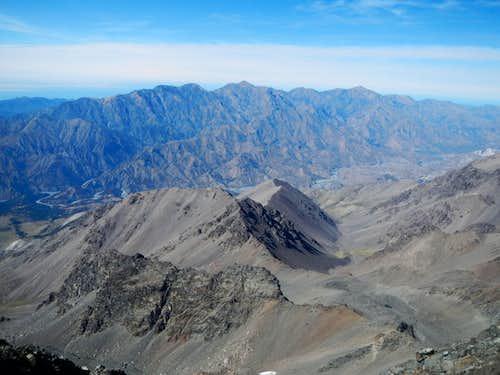 Seaward Kaikoura and Manakau seen from Tapuae-O-Uenuku
The Kaikoura Range actually comprises two parallel ranges close together and separated by the remote and difficult to access Clarence River. Tapuae-o-Uenuku is the high point of the adjacent Inland Kaikoura. For a range which reaches above 9000 feet, it's unusual that there is no geologic sign of any previous glaciation. 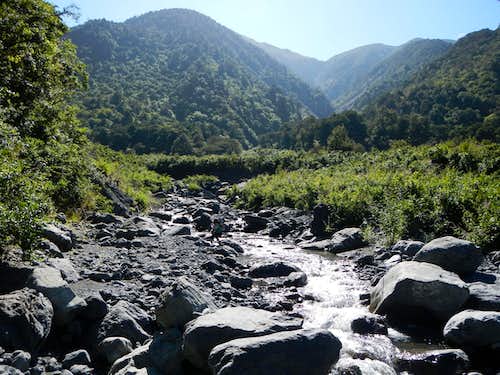 Hapuku River
Manakau is generally climbed in 3 days, however some slower parties might require 4 days. The standard route begins in the Hapuku River drainage and ascends Surveyor Spur. Camping out is not necessary because of Barratt’s Bivy, however for those planning to camp on Surveyor Spur, a tent or bivy sack will be necessary. 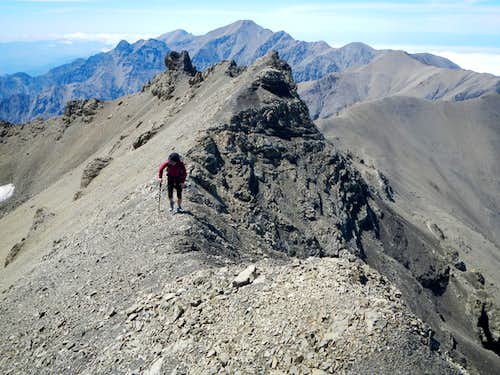 Nearing The Summit
Coming from Barratts Bivy, summit day is extremely long and that is the reason most ascent parties are unsuccessful. The distance itself is not excessive but the elevation gain is significant while the terrain is rugged enough to make quick travel impossible. It is therefore suggested that you get a pre-dawn start on summit day if coming from Barratt’s Bivy. Winter and Spring ascents will involve snow climbing but summer months tend to be very dry in the Kaikoura. In the summer, there is no water on Surveyor Spur or above. 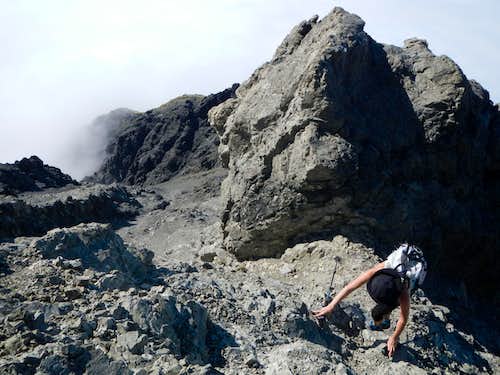 High on Surveyor Spur
DO NOT underestimate this peak. The standard route involves a lot of scrambling, is extremely rugged almost all the way from the car park to the final summit ridge, and gains 3000 meters accumulatively. Just getting to Barratt’s Bivy can be a challenge in itself because of dense brush and large river rocks. Then there’s the matter of actually finding the hut which is hidden in the trees. If you are visiting New Zealand from another country, you might be surprised by the toughness of this mountain. Failed attempts and timing-out is more common on Manakau than actual success.

Manakau Summit Panorama
Other sources suggest that some tentative parties might want a rope for the final portion of ridge. With careful route-finding it does not exceed YDS class 3, but plenty of loose rock is present on the route so helmets might be a good choice for the larger groups. 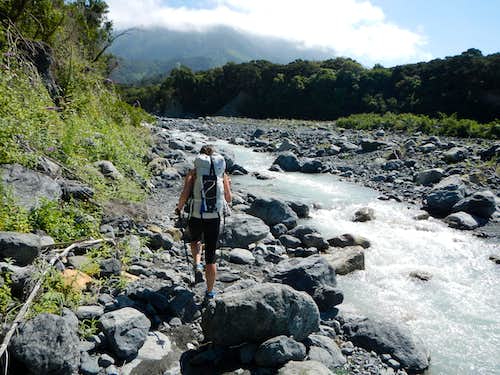 Starting up the Hapuku
From the car park continue a short distance up the road keeping right at a fork. The road crosses the river. Stay on the left bank and travel upstream until crossing is necessary. Continue for 5 kilometers along the river until the drainage narrows into a gorge. 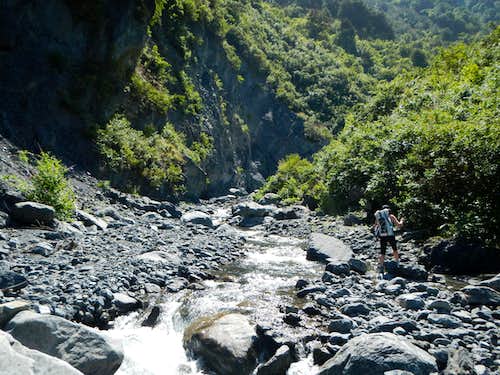 Upper Hapuku River
After another river crossing, look for a trail going up into the forest on the west side of the gorge. It’s necessary to follow this trail up and over a ridge so as to avoid the worst of the gorge. 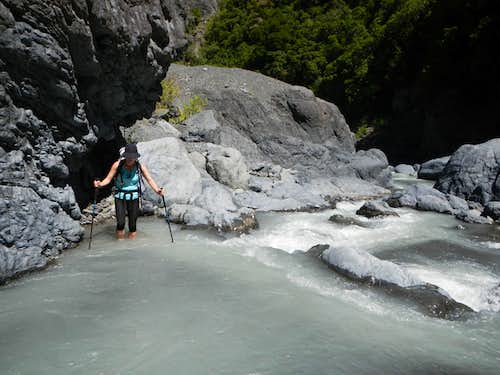 Another Crossing
Turn right at the Mount Fyffe trail junction and then follow the river downstream a short distance to a major fork. Turn left at the fork and continue to boulder-hop and scramble and brush-bash upstream to the next fork, travelling in a north by northeast direction. 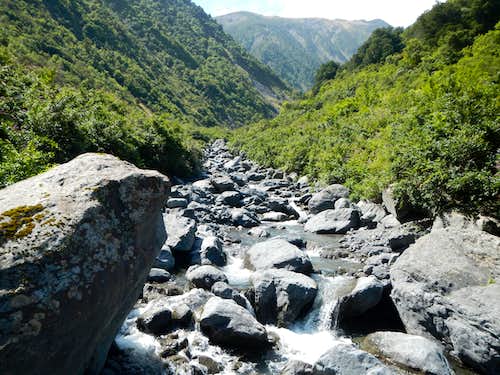 Rugged Terrain
At the second fork you will see that the lesser right fork is very steep and ends on the slope high above. Turn left and follow the main channel to a major bend just east of Stace Saddle. From this bend in the river it’s another half kilometer to Barratt’s bivy. That means you will have to backtrack to the bend if you are staying at Barratt’s Bivy. 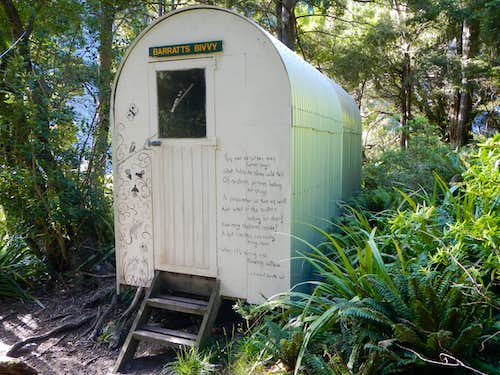 Barratts Bivy
The hut is not visible from the river and can be tricky to find without a GPS device. It’s located 5 yards inside the trees on the southeast side of the river above a sort of flat broad bench. 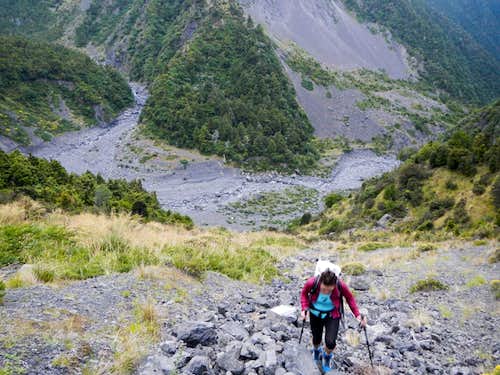 Above The Bend
To reach Surveyor Spur backtrack to the bend in the river and ascend loose scree for 330 meters to reach Stace Saddle. From the saddle turn north and follow the ridge which is brushy initially but later narrows into bare rock. 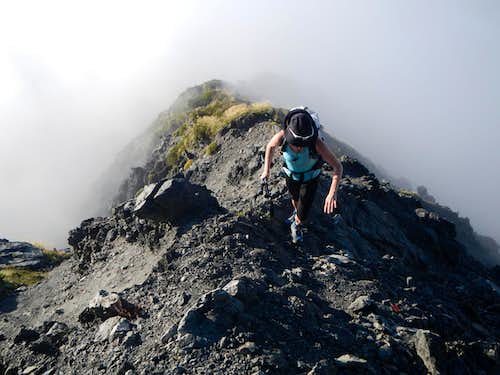 Ascending Surveyor Spur
You will gain another 1165 meters on Surveyor Spur before coming to the top of Point 2210. Before that there is a crux section at 1490 meters. Here the trail seems to disappear and the ridge turns into a very steep section of nearly vertical grass. 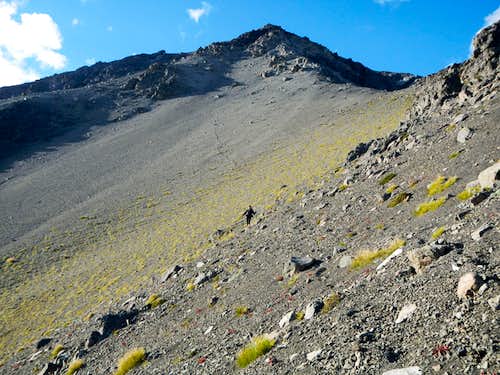 Scree Bowl
Do not climb the exposed grass. Instead, turn left off of the ridge and descend 5 to 10 meters into a loose rocky gully below a bare rock wall. Look for easy ledges that allow passage across the lower portion of this wall and then up around the left side of it. 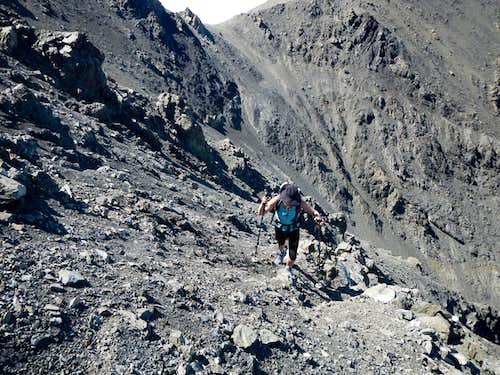 Loose Traverse
Above the rock wall you will enter a large scree bowl. From here the main ridge crest can be regained. Continue to the top of Point 2210 and which is the end of Surveyor Spur. 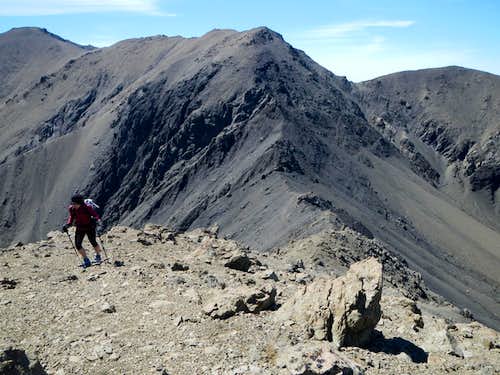 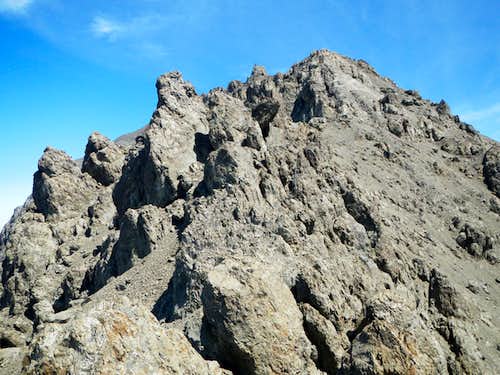 The East Ridge and Gendarmes
Do not ascend the southwest ridge of Surveyor Peak. This traverse from one saddle to another is loose and unpleasant without snow cover. Footing can be a bit dodgy. Beware of small cliffs and rocky ribs. 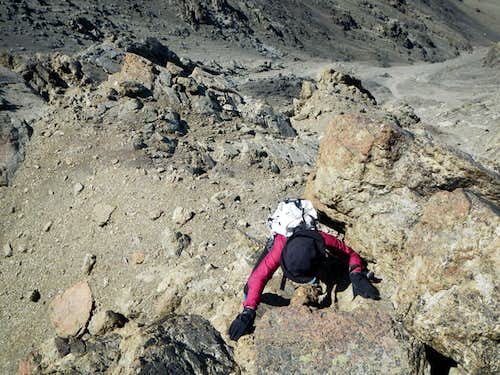 East Ridge Scramble
From the saddle at 2210 meters continue west along the ridge crest going up and down over several rises and scrambling over or around minor gendarmes. Parts of the ridge are narrow and loose. Some parties might want a rope here, but most won’t (see the video below which shows the final ridge section). 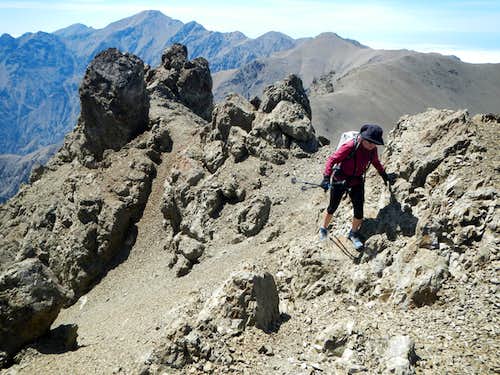 Along The East Ridge
All obstacles turn out easier than they appear from afar. There is one very large gendarme before the final summit ridge which can be avoided on the north side.  Good luck getting back to Barratt’s Bivy before dark. 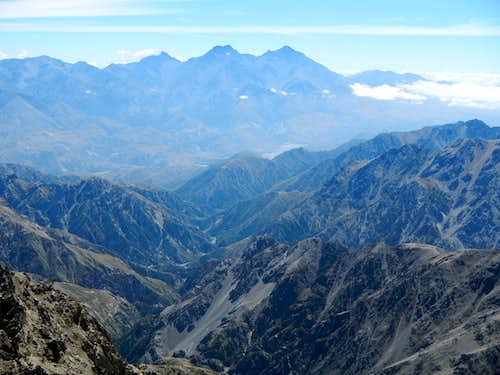 Inland Kaikoura seen from the summit
NOTE: An alternate route ascends the west ridge from Dubious Bivouc but that route will not be described here.

From the town of Kaikoura on Highway 1, drive north for 9 kilometers and turn left onto Parsons Road. Continue another 2.8 kilometers and then turn right onto Grange Road. Drive another 1 kilometer to the car park on the right where there is an informational sign.

Using Barratt’s Bivy is free. Don’t leave food outside because of the possums.