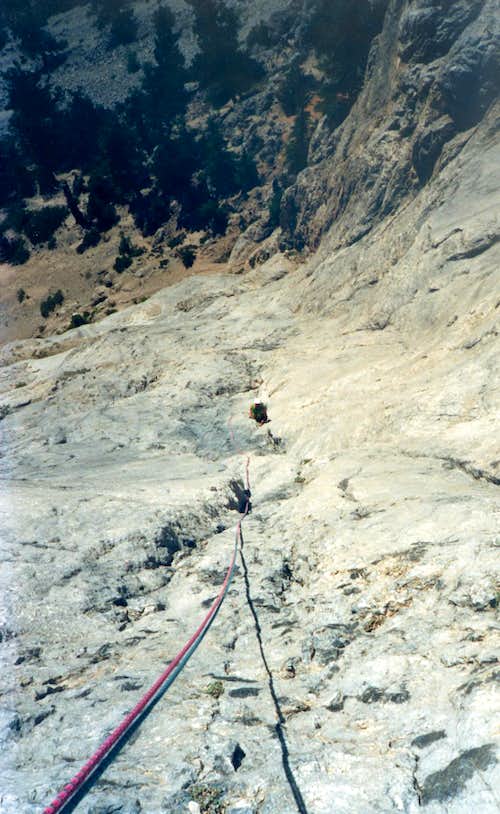 Putting up a new route on the Mid Wall

Marble Canyon is made up of a Headwall (500 metres) that sits on top of a large Apron (250 metres) – the headwall and apron are split by a huge treed sloping terrace (it takes approximately 20-30 minutes to walk from the top of the apron, up the terrace, to the base of the headwall). The headwall is bordered on its left by a massive gully (naturally named the “Great Gully”). To the left of the “Great Gully” is a smaller wall called “Mid-Wall”. The “Mid Wall” is bordered on is left side by another enormous gully called the “North Gully”.

The majority of the climbing occurs on the Apron, but there are routes on the Headwall and Mid Wall as well.

There is a long history of climbing in the Canyon dating back to the 1950’s, but there has been very little documented until recently. The most reliable source of documented information can be found in the Guidebook “Central BC Rock” by Lyle Knight. This is published by Merlin Productions. Keep in mind that Marble Canyon is a huge place, the terrain is very complex, and the guidebook only covers some of the more popular routes. If you plan to climb any of the multi-pitch climbs, good route finding skills are necessary. The rock in Marble Canyon is quite variable, ranging from beautiful grey bullet-proof limestone to manky rotten red limestone, and everything in between. Wear a helmet and be equipped to rappel from anywhere.

The climbing is generally in the moderate range (5.7 to 5.10). Climbs are protected with a mixture of natural gear and bolts. Keep in mind when climbing here, that almost all of the multi-pitch routes were put up on lead, and the bolts drilled by hand.

Marble Canyon has the added bonus of being an excellent ice climbing destination. There are a number of climbs that form regularly on the southwest side of Turquoise Lake, the most popular being the 3 pitch grade 5 “Icy BC”.

As well as the impressive rock, there are also three beautiful clear turquoise lakes in Marble Canyon. The largest lake (and furthest west) is called Pavilion Lake, the next lake to the east (and second largest) is Crown Lake, and the smallest and furthest east is called Turquoise Lake. A provincial campsite is situation between Crown and Turquoise Lakes

In Pavilion Lake, scuba divers recently made an unbelievable discovery. The Lake has underwater features that are coral-like. These features are called stromatolites. The coral-like structures are formed from the fossilized remains of micro-organisms (microbiolites) that are considered to be similar to some of the oldest known lifeforms on Earth. There are no known freshwater stromatolites anywhere else that approach the size of those in Pavilion Lake. Because the stromatolites are fragile, scuba diving in Pavilion Lake requires specialized training. The site is in the process of becoming a UN World Heritage Site 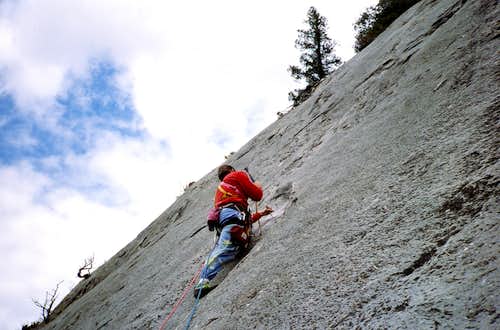 Putting up a new route on Marble Canyon's Apron. Note the hand drill

Marble Canyon Provincial Park is located 22 miles (35 km) northeast of Lillooet on Hwy 99, and 25 miles (40 km) northwest of Cache Creek. Each community is approximately 45 minutes away by vehicle.

Lillooet is situated on the banks of the mighty Fraser River and is a community of approximately 3000 people. From Lillooet it is possible to drive over the Coast Mountains on the scenic Duffy Lake Road – this road connects to Whistler and then onto Squamish. Many a Squamish climber ends up coming to Marble Canyon to salvage a rained out weekend on the coast.
Cache Creek is a small junction town located at the intersection of Highway 1 and Highway 97. Cache Creek has approximately 1000 residents. To get to Marble Canyon from Cache Creek – travel north on Highway 97 for about 20 kilometres, until the junction with Highway 99 is reached. Turn left on Highway 99 – in about ½ hour you will reach Marble Canyon. It’s impossible to miss.

The parking spot for the Apron climbs is a pullout on the lake side of the road right at the east end of Pavilion Lake. There is a well used approach trail directly across from the parking pull-out.

The climate at Marble Canyon is very arid. This area receives little moisture during the year, and the nearby community of Lillooet is often the hottest spot in BC and Canada. Add to this hot climate, the fact that Marble Canyon predominately faces south (southwest) and you have the makings of a very hot place to climb – too hot in fact. Climbing is most pleasant during the shoulder seasons – April to June, and September to October. It is very possible on certain days in the spring to ice climb in the morning and rock climb in the afternoon (I have done this – it’s a blast). Alternately, if you are climbing there and the day is expected to be hot, get up early – you can climb in the shade until around noon.

There is no red tape issues in Marble Canyon.

The is a small provincial campground located between Turquoise and Crown Lake; from this campground, it is about a one minute drive to the parking spot that accesses the majority of the climbs. The campground has 30 non-serviced sites and runs on a first-come, first-served basis - campsite reservations cannot be made. During the best climbing times (spring and fall) this campground is rarely, if ever, full.

The campground operates on a self-registration system - only cash is accepted. Staff is at the campground at least once a day during the camping season (May to September). Current camping rates are $18/night per camping party – firewood can be purchased but is in addition to the camping fee.

The campground is only serviced May 1 to September 30 of each year. Outside of these dates, the campground is open and free, but there is no firewood, no garbage removal, and no water. One pit toilet is maintained.

Depending on what you’re climbing – you may only need a rack of quickdraws; however, if you plan on climbing any multi-pitch climbs, you will need a full rack, with more emphasis on the smaller pieces. If you plan on climbing some of the less travelled climbs, it is a good idea to have a few pins and a hammer, in case retreat is necessary.

The sport climbs are primarily located on the Apron, are moderate in grade and are one pitch long.

As previously noted, the majority of the routes are located on the Apron, but there are routes located on the Headwall and mid wall. I will describe a few routes on each of those three main climbing areas:

There is also ice climbing on the southwest side of Crown Lake – when the ice is in, it can easily be seen from the highway. There can be 4-5 independent lines up to grade 5 and up to 3 pitches in length.