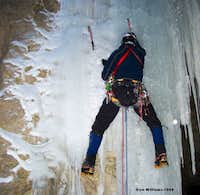 Marble Canyon in Kootenay National Park, BC, Canadian Rockies, not to be confused with Marble Canyon of the Pavilion Mountain Range interior British Columbia, offers an exceptional (minimal avalanche) ice climbing experience. Marble Canyon, carved deep by Tokkum Creek, used to be one of the more visited tourist stops along Highway 93 which cuts through the Canadian Rockies from Radium Hot Springs to Castle Mountain. However, several years ago a wildfire ravaged the area and it remained closed until the dead timber could be managed. It reopened and today, 2008, it represents a barren landscape in the winter until you rappel into the mighty depths of Marble Canyon to the active Tokkum Creek flow, then the fun starts.

The main advantage of climbing in Marble Canyon itself is the minimal, if any, avalanche danger. This is opposed to climbing routes farther north on Tokkum Creek to the backside of Valley of the Ten Peaks. I have skied up Tokkum Creek and can attest to the serious avalanche shoots on approach to these routes farther upstream from Marble Canyon, Blazes Journey, III, WI 3-4; No Aldernative, III, WI 4; Winnipego Warrior, IV, WI 4; Westafailure, III, WI 4+ and Phantasmagoria, V, WI 5. There is specific hazard to climbing in Marble Canyon of breaking through ice to rapidly flowing water below. Pay attention, as this kind of incident would no doubt yield a negative result. 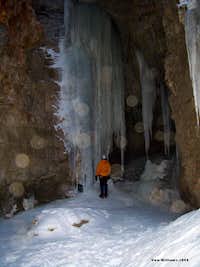 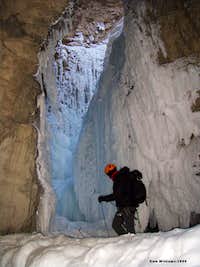 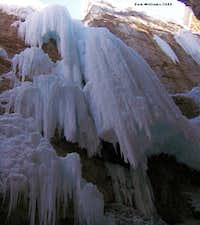 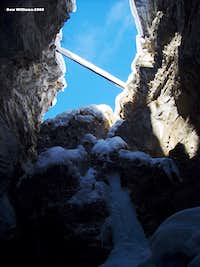 The main waterfall climb in Marble Canyon, named Tokkum Pole, a 40m WI 5+ (photo), is a wonder of a pitch located between the fifth and sixth bridges crossing Marble Canyon on the interpretive trail. In January, 2008, the bottom portion of Tokkum Pole was missing, despite its broad and thick top 2/3rds hanging like steel onto the steep east canyon wall. We attempted to climb the resulting mixed route, but without rock gear and no bolts in site, failed to find a protected line. In the condition we found it, you are required to climb underneath a very thick portion of the fall and traverse rock out left or right to swing out onto the WI 5+ curtain. It is quite difficult to fully assess Tokkum Pole without committing to the canyon by rappelling down Tokkum Pole to the bottom. We actually rapped from the interpretive trail fence directly over Tokkum Pole.

Once at the base of Tokkum Pole, we saw evidence of open water downstream (avoid getting your ropes wet if possible as it never got above -27C when we were in the canyon). Upstream are four additional routes, the last of which is your exit ice at easy WI 3 grade. The first route upstream attached to the same wall as Tokkum Pole is an easy mixed route named Throttler.

The next two pieces on the opposing wall form individual curtains that meet at the top of the canyon. The first one is a thin sheet (WI 4) that is difficult to protect until you make a complete turn above in an alcove of sorts (photo). Then continue up a WI 4 curtain above the turn that was easy to protect until you scramble out of snow, logs and brush to the top of the canyon. You can bring up the 2nd and rappel utilizing a significant downed tree that we left tat on in 2008. You can also stop short of breaking out of the canyon and top rope via a bolt or two. Probably a good idea to back them up with screws until the last rappel.

The next WI 4 route is basically on the backside of the before mentioned route. In 2008 it was a stand alone pillar that twisted up and left narrowly under the west wall of the canyon, allowing for a little stemming on rock and ice. Although you reach the same bolts as the previous route, you do not climb the same line on the upper ice. The first one is climbers right, the second, climbers left.

The exit ice is quite aesthetic, but borders on WI 2 vs WI 3 with a bunch of run out snow climbing towards the top. In January, 2008, there was a huge hole down to the running creek between where the belayer stands and the leader takes off. You would want to protect this climb early so as not to slide into this gaping hole (photo). The plastered ice foam on the adjacent rock walls makes for quite the scene. It is hard to make much of a station at the top of the canyon. A little rock gear might make less experienced parties somewhat more comfortable. Once the 2nd is brought out, there is a steep snow slope that needs to be ascended to the top of the western canyon wall. Crossing the snow ledge to the east side from the belay spot would not be recommended even though tempting. It is basically a bunch of tree logs and brush filled in with snow.

Park at the Marble Canyon parking lot off of Highway 93, 17.5kms west of Castle Junction on the TransCanada. Follow the interpretive trail signs looking for the Tokkum Pole, II, WI 5+, between the 5th and 6th bridge.

Two Ice Tools, Double 60 meter Ropes, 12 Ice Screws with draws and/or screamers, Crampons, Helmet, Real Warm Gear, but you can leave the sunglasses at home, this can be a damn cold spot in the dead of winter as you get no sun, albeit no wind either, Full Shank Boots, Gaiters.