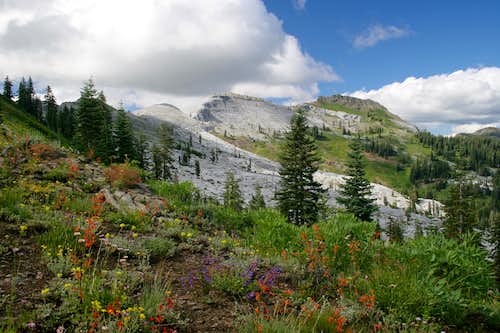 Composed of stark white marble, Marble Mountain is one of the most unique mountains in America. The distinctive chunk of rock is the obvious centerpiece and namesake of the Marble Mountain Wilderness, one of the great American wilderness areas. The peak is located in the heart of the Klamath Mountains, a range composed of a cacophony of rock types ranging from glacially polished granite to bright red serpentine and peridotite. Even still, the vivid white cliffs of Marble Mountain are as stunning as they are surprising and unexpected. Contrasted against the blue sky, green trees and meadows and the black schist of adjacent Black Marble Mountain, the white marble of Marble Mountain is a spectacular image that is not quickly forgotten. 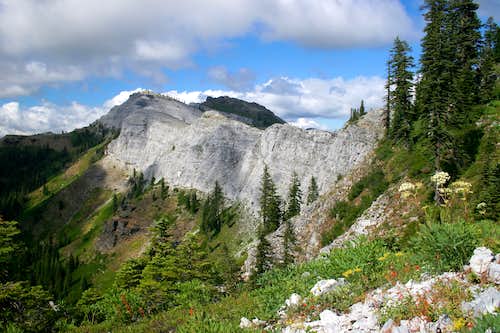 Although the mountain is the most notable, it is not the highest point in the vicinity. That honor goes to the formation incorrectly called Black Marble Mountain, which is located next to Marble Mountain. Boulder Peak, the highest summit in the Marble Mountains is found across the Canyon Creek drainage from Marble Mountain. Nonetheless, the peak is far and away the most visible and recognizable object in the area. Marble Mountain is not a distinct peak like most prominent points identified as mountains. Instead, the peak forms a long, curving, escarpment with numerous highpoints along the rim. The eastern side of the mountain has an extensive, gradual slope that terminates in Marble Valley. All approaches to the top save one are on this side. The western side drops away in sheer cliffs two thousand feet above the Rainy and Elk Creek drainages. Because Marble Mountain forms a long escarpment, it is often referred as the Marble Rim. The Marble Rim is broken into two sections by a gap roughly located in the center of the formation. Some maps identify the high point of the larger, southwestern half as the actual summit. Although higher, the part of the Marble Rim northeast of the Marble Gap is sometimes identified as part of Black Marble Mountain.

Views from the Rim are astounding. Looking southwest, the entire Wooley Creek drainage is apparent as the creek tumbles 6,000 feet into the Salmon River. Wooley Creek is the primary drainage of the Marble Mountains. To the north, Kings Castle is visible, as well as the Klamath River canyon and the High Siskiyous, the awesome Preston Peak being the most prominent peak visible. Looking south, one can observe the high peaks of the Trinity Alps. The Thompson Glacier is clearly visible. Other peaks in the Marble Mountains surround the Marble Rim. The Maneaten Group and Boulder Peak are particularly prominent. 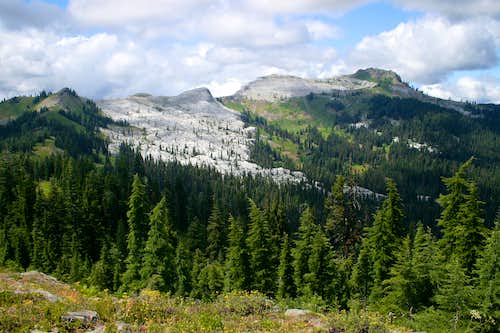 The Marble Rim from above the Sky High Lakes

The Klamath Mountains are one of the most diverse mountain ranges in the United States. The stark granite of the Trinity Alps is a striking contrast from the serpentine and peridotite of the Red Buttes or the metamorphic rock found in parts of the Siskiyous. The Marble Mountains themselves have a striking array of rock types. The Boulder Peak is a striking contrast from the Maneaten Peaks group, despite their close proximity. Nonetheless, even among the varied rock types of the Marbles, Marble Mountain itself is a unique and striking peak. The blindingly white marble is a unique feature in the Klamaths. Marble occurs elsewhere in the Marble Mountains in places such as the Kings Castle to the north and the Big Elk Lake. However, as beautiful as these areas are, Marble Mountain remains an order of magnitude greater in terms of beauty and its spectacular nature. 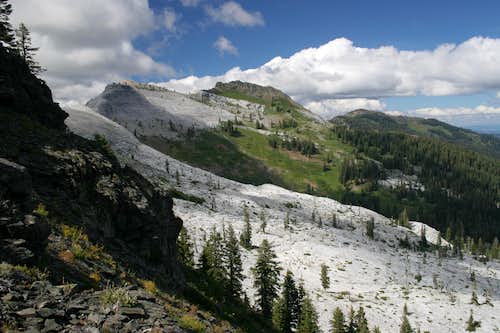 One particularly interesting feature of the Marble Rim are the numerous caves it contains. There are over 150 documented caves, most containing excellent stalactites and stalagmites. One cave is documented to be longer and more extensive than the cave contained in Oregon Caves National Monument, which is located in the upper reaches of the Klamath Mountains in southern Oregon. Due to the anonymity of the caves and the difficulty in locating their entrances, access to the caves on the Marble Rim remain unrestricted. The Forest Service does ask that only serious spelunkers attempt entry. 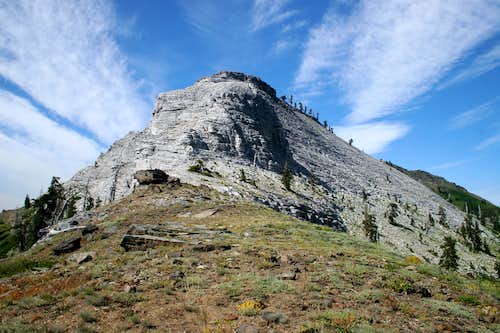 Looking northeast from the Marble Gap

Although it is not located at the true geographic center of the Marble Mountains, the Marble Rim does form the functional center of the wilderness area’s extensive trail network. The mountain is most easily accessed via the Canyon Creek (not to be confused with the Trinity Alps’ popular Canyon Creek) trail. A detailed description of the entire route can be found here. 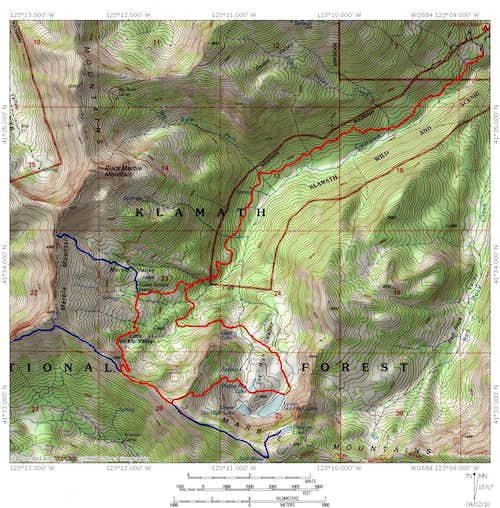 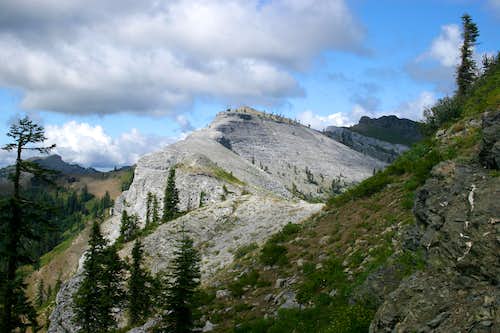 Looking northeast along the Marble Rim

From Interstate 5 in Yreka take the Highway 3 exit at the south end of town. Take Highway 3 west to Fort Jones, in Scott Valley. Turn right onto River Road and proceed west, following the course of the Scott River. After several miles, turn left, crossing of the Scott River on the Indian Scotty bridge. Proceed past the Indian Scotty campground. The road narrows but remains paved, eventually coming to a dead end at the Lover’s Camp campground and trailhead complex.

Other trailheads, including the route to the PCT at Paradise Lake are located off of the road from Indian Scotty. 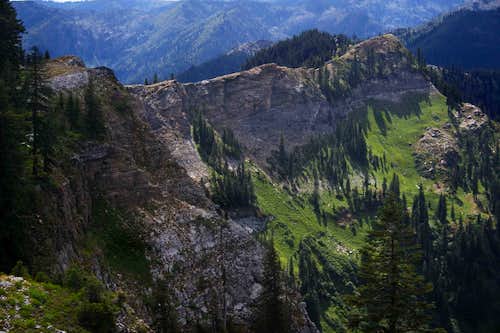 The western end of the Marble Rim

The Marble Rim is located in the Marble Mountain Wilderness, which is administered by the Klamath National Forest. Normal wilderness rules and ethics apply. A campfire permit is required.

The Forest Service asks that only serious spelunkers enter the caves on the Marble Rim. 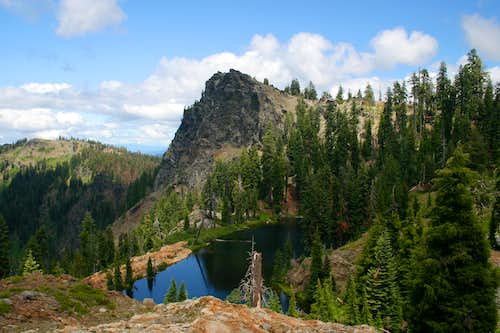 Camping is available at numerous trailheads, including the popular Lover’s Camp trailhead. This site has both backpackers campsites as well as campsites adjacent to horse corrals. Campsites abound around the mountain, along the PCT. Marble Valley has plenty of good sites. An excellent option is to camp at the Sky High Lakes, which are located a couple of easy miles from the Marble Rim. Another great option is to camp at the secluded Shadow Lake. This lake is slung on the cliffs high above the Sky High basin. Few people go to this lake so privacy is guaranteed. It is located less than a quarter mile off of the PCT, a mile south of the Four Corners saddle.

The only comment I have is that the link at the bottom to the Klamath NF's wilderness page has an extra "http" in it. Oh, and maybe a note about suggested months to visit, or perhaps a date or two in the photo captions. The last time I was in this area was early July 2004 and I recall snow on some areas of the PCT.

I am glad you liked the page and I appreciate the input too! I will add a note regarding the conditions. I am actually working up a route page. I have had a long docket of things to do but oddly enough a bad economy means my business goes up, so I have been too busy to post anything in a while. I hope you are doing well!

No worries ! Now that I'm backpacking again I definitely want to visit the Marbles again this year :)

Well...if you want a basecamp in Shasta or someone to go with you, give me a holler!

Posted. Thanks for the link!

The coordinates you provide for the peak correspond to the peak with elevation 6,990ft, just south of the peak with elevation 7,321ft. It's not obvious from the topo map which is the correct point. Peakbagger.com shows Pk. 6,990ft as the correct one, for what that's worth. I honestly don't know - I had thought the point to the south, 6,881ft was it based on another peak list, but again I've no sure idea.

I have really vacillated on this point. At first I went with the 6,990 as the highpoint. I am not sure where, but I remember seeing that point listed somewhere. It definitely is the highest point on the main chunk of the rim. Yet the when I am up there, Pt. 7,321 seems like it is part of the same formation. Thus I changed the elevation after my last trip there. It really comes down to whether you say the Rim ends at the gap or the large marble block on the north side of the gap is part of the Rim. Of course, 7,321 could also be a shoulder of Black Marble Mountain. Here are the angles that I have found useful in reevaluating the issue: http://www.summitpost.org/marble-rim/327267/c-327255 http://www.summitpost.org/marble-rim/327271/c-327255 http://www.summitpost.org/marble-rim/327266/c-327255 Like I said, I have gone back and forth on this one. I am comfortable changing the elevation back to 6,990 if you think that is more accurate. Thoughts?

Having never been there, I honestly have no idea which is best called Marble Mtn. The USGS seems to agree by marking the whole ridge with the title, a bit of a cop-out. I just wanted to point out that your coords and elevation are out of sync. Pick whichever you think best and make the elevation/coords match. I noticed that peakbagger.com picked the 6,990-foot point, but they're not a definitive source.

Just a heads up. I switched the elevation back to 6,990. I think a strong case can be made for the higher point but there is less confusion and alignment with peakbegger this way.

Ok, I finally got to pay a visit a few years ago. Very cool area. It seems to me that all the whitish rock is limestone, not marble at all.