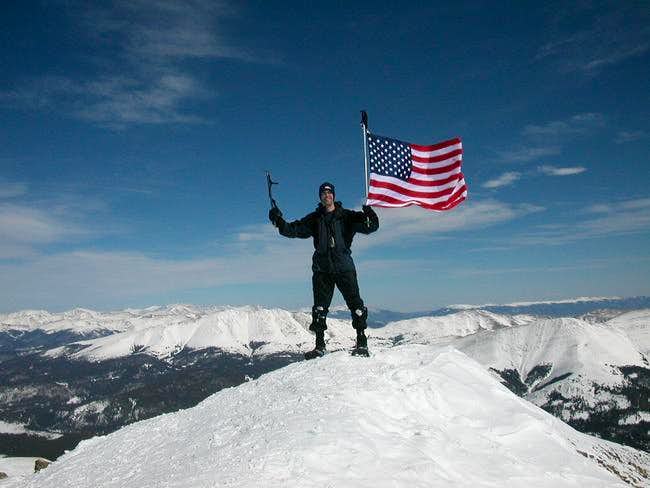 Wish I could give it 50 stars!

Thanks a lot. I was actually pretty bumbed. The first vote got only was one vote. How could someone only vote one star when the American flag is in in. I know my ugly mug takes away from it, but not down to one star.

A number of active members arguably have an Anti-American agenda. They probably interpreted your photo as promoting an offensive political opinion.

I did not think of it that way, thanks for pointing that out. I actually hate politics. I was in the Marines for 4 1/2 years and the rest of my family was in the Navy. I am really patriotic from that. So, that is the reason I just thought it would be cool to take that flag to the top of every 14er in Colorado.

dkantola, with all your logs, when are you comming out to Colorado to tackle the 14ers out here?

Don't click on them then. An SPer can take pride in an accomplishment of reaching a summit and posting a pic may be a big part of it for them. I know it is for me. They should not be hacked with a poor vote just because someone has seen similar photos. However, with this pic I disagree with you. I think The Marine was unfairly hacked, not because he climbed a 14er that has been climbed countless times before, but because he did it proudly with our flag.

So, let me see..., we have gone from The Marine proudly carrying our flag to the top of Quandary as being one of, "entirely too many nearly-identical summit photos of popular mountains just like this," to a polarizing political statement. What was the reason for the initial poor votes? (Don't look now, but he seems to being doing pretty well in the vote category, so maybe we are both wrong.) THE GUY PROUDLY CARRIED OUR FLAG TO THE TOP OF A MOUNTAIN! It does not need to be politicized into something he needs to feel sorry for out of PC sensitivity. The flag he carried to the top of Quandary is the same flag that flies in Iraq and flew over Vietnam, Normandy, Iwo Jima, Little Big Horn, Gettysburg and Bunker Hill (minus a few stars.) Different people look upon these wars and battles in different ways. You don't have to be in agreement with what America is doing now or did in the past, but I hope your not faulting the flag or being ashamed of it, because someone may be associating it with "imperialism and belligerance." Do you agree with me that if someone gave this a poor vote because of the flag that this was unfair? If you were there with The Marine on Quandary, would you have had any problems proudly standing with him in that picture? I don't know, but I hope not. You will have to answer that yourself. Sorry for the long-winded fiery post:)

I could not have said it better! What is the difference between flying the flag off your front porch or carrying it to the top of a mountain? Flying the flag makes only one statement and that is that you are a patriot, whether you are a Democrat, Republican, Libertarian, Greenie or Independent (like I am, but with a conservative bend) and no one needs to apologize for that.

That was real classy CharlesD. Delete all your posts in a simple discourse that fellow members were having. Rather than make a statement, political or not, you make no statement at all. Then again, hopefully you are running out to WalMart, the evil American mega-corp., to buy a flag for your next 14er attempt;)

Bullshit indeed! What's political about expressing one's love of country? Seems to me that transcends any political affiliation. But I can definitely think of one side of the left-right divide that's more prone to looking at the stars & stripes and seeing only this country's "transgressions." Me, I see the colors of a great nation! A country that most of the rest of the world tries desparately to emulate. Freedom's a wonderful thing.

Vote the photos the way you see them. I see this as nice composition, nice color, nice focus, and nice interest. It gets 4 stars in my book. When you summit you take your flag, your family picture, or whatever you want. Don't bash the guy with your vote because he proudly displays his beliefs and you might personally have different beliefs. If I could I would give it 50 stars too!

Next time I am in the Springs... and I have a second home just outside the North Gate to USAFA, I will look you up and buy you a beer. I will always buy a Marine a beer.

Yes Wave it proud. America rocks. We have so much freedom and prosperity. Visit any other country to realize this. Excellent view, nice hike, looks like you had much fun.

whats up dawg! Thats a nice photo, I read some of these posts and i want to tell these people you have no political agenda , when you take your flag with you to the top of these peaks. You are just taking a flag and raising it proudly, and taking some photos. I will one day hold that flag on top of one too, if your lucky!

A proud American – proud of his country, brave enough to fight for its freedom, for YOUR freedom – respectful of others – gentle – tough – a good listener – a doer –– and the best son! Love, Mom

First, I like the composition and use of color. the white snow in the foreground makes the mountain the subject, as it should be. And the flag is more prominent than the face . But the body language speaks pride: pride of accom plishment of the climb, and pride in copuntry.. As to all the PC discussion, the flag stands for all that makes America great, regardless of what it's doing at the moment. (Hint, WW II was the only war with no strong antiwar sentiment.)

We learned to climb together when you were in the eighth grade. You gave me the honor of leading. We had some great experiences on rope together over the years, but ever since you stood number one in the Assault Climber School in the Marines, I have gladly followed your lead – anytime, anywhere. There’s many more summits ahead…Climb on! Love, Dad

Amazing picture cous..............looking forward to seeing more pictures with the American Flag. I think it is a great patriotic statement!! Love, Amanda

I would like to comment that whoever was the photographer must have done an amazing job .... just thinking....