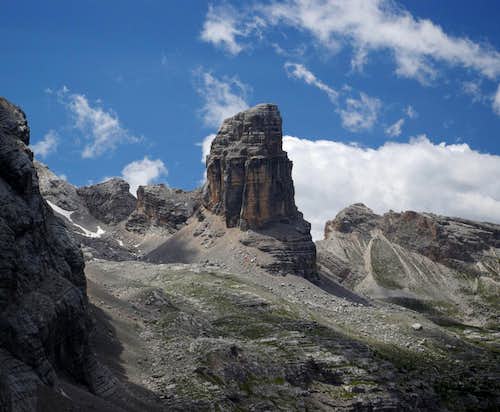 “The wildest group of the Dolomiti”. You can often hear this about the Marmarole when you are in the Dolomiti Orientali, and is probably true.

Somebody could ask how a mountain group like this, composed by wonderful peaks and towers of almost 3000 meters, situated very near popular touristic towns and famous mountains, can be still so wild in the year 2008. There are three main reasons: the first is that all the main summits are difficult to climb and require alpinistic experience. Some of them can be climbed without climbing equipment but you have to be familiar with rock climbing and with wild and isolated places. The second is that the valleys around this dolomitic peaks are deep and almost all the roads are not very good, so the approaches are often long, difficult and strenuous, too much for the modern hikers and climbers. The third reason is that there aren’t much information about this wild summits and whoever come in this area prefers the more safe and advertised ( but also overcrowded ) routes of the nearby mountains around Cortina and Misurina, like the Tre Cime di Lavaredo or the Tofane group. But if you think that the Marmarole are not worth a visit just take a look at them at sunset from the Lago di Centro Cadore or from San Vito and admire the spectacular colours of this fantastic cathedrals of dolomite.

Of course if a broad part of this area is off-limits for tourists and casual hikers it’s not difficult to understand that the Marmarole are a fantastic paradise for “old fashioned” alpinists and real mountain lovers, that can breathe the atmosphere of the first pioneers of the Dolomiti. In this group you can find wonderful classic normal routes, not technically difficult ( usually around the II UIAA degree ) but very challenging because are very long, hard and often not marked. There are also great climbing routes opened by famous rock climbers, like the Livanos routes on the Torre dei Sabbioni and the Corno del Doge. 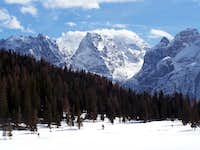 The views that you can enjoy from the summits of this peaks are breathtaking, among the best of the whole group of the Dolomiti. The mountains that you can see from there are countless, but within a range of 30 km you have Antelao, Pelmo , Civetta, Tofane, Croda Rossa d’Ampezzo, Sorapiss, Pomagagnon, Cristallo, Tre Cime di Lavaredo, Cadini di Misurina, Croda dei Toni, Monte Popera, Cima Bagni, Croda Da Campo, Peralba, I Brentoni, Cridola, Spalti di Toro-Monfalconi, Cima dei Preti and Duranno.

This are the mountains of Tiziano, one of the greatest italian painters of the Renaissance, that was born in Pieve di Cadore, just at the feet of them. He loved so much this group that he painted it in one of his most famous masterpieces, “La presentazione della Vergine nel tempio”, a huge painting that can be admired in the museum “Gallerie dell’Accademia” in Venezia. A nice summit ,a bivouac and a famous “Alta via” (a trekking route through the Dolomiti ) are named after him.

The Marmarole are usually put inside a broader group with Antelao and Sorapiss, but I think that it’s better to keep the three separate, because each one of them has its own identity and alpinistic history. And it’s really not fair to consider the imposing summits of this group just “minor” peaks near the two famous dolomitic giants.

Like many other ranges in the Dolomiti this one also is a fairy tale place, but here you won’t find elves or trolls but other strange inhabitants called Crodares, the sons of the rocks. Ruled by Tanna, a beautiful Queen that lives in a castle of ice, the Crodares are just like men but without feelings, because their heart is made of the same rock of the Marmarole. There are also stories about mythological animals, like the half black and half white chamoix.

The name Marmarole has probably the same root ( celtic ) of the Marmolada and should mean “splendour”. 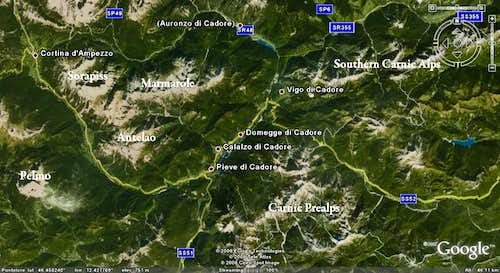 This dolomitic group is situated in the north-east of Italy, inside the Dolomiti Orientali, in the area known as Centro Cadore ( Regione Veneto, province of Belluno ). It’s a 13 km ridge ( direction east to west ) that is divided in three subgroups: Marmarole Occidentali ( Gruppo del Bel Pra ), Marmarole Centrali and Marmarole Orientali ( Gruppo del Ciastelin ).

The average elevation of this summits is around 2500/2800 m, with three mountains ( Cima Bel Pra, Cima Bastioni and Cimòn del Froppa ) that nearly touch 3000 meters.

If you observe well this mountains from every side you can easily understand the complexity of their geological structure. The group originated between 180 and 240 million years ago and is basically a huge syncline situated between two big faults called Linea del Pian di Sera ( N ) and Linea dell’Antelao ( S ).

The central part of the group is composed by Dolomia Principale ( Norian period of the Triassic age ) but all around it you can find stratifications of different kinds of dolomitic rock and limestone of the Triassic and Permian Age.

The first ascent in the Marmarole was disputed for a while but today is accepted that the alpine guide from Calalzo di Cadore Giovan Battista Toffoli ( known as Tita Petòz ) and the Captain G. Somano climbed in 1867 the highest summit of the group, the Cimòn del Froppa.

Ten years later another guide from the Cadore, L. Cesaletti , climbed solo and unroped one of the most beautiful towers of the group, the Torre dei Sabbioni, overcoming very high difficulties for those years and opening a new era of the dolomitic alpinism.
In the following years famous alpinists like Darmstadter and Zsigismondy and local alpine guides like Orsolina, Siorpaes and the Dimai brothers started to explore the area and climbed the most accessible summits of the group.
Then in the years before the first world war the Fanton brothers ( Umberto, Arturo, Augusto, Paolo, Teresa and Luisa ), the famous pioneers of the dolomitic alpinism, explored this mountains in a systematic way and opened the famous Albergo Marmarole in Calalzo di Cadore, which became a meeting point for the alpinists of those years. Among the brothers Umberto was the strongest and can be considered the real pioneer of this group ( for many is the first italian alpinist ). He was also a pilot of the Italian air force and died very young fighting in the skies above his beloved Dolomiti during the first world war.
In more recent times famous mountaineers like Severino Casara, Ettore Castiglioni and Georges Livanos opened interesting routes in the group but after the sixties this mountains slowly have been forgotten from the modern alpinists. 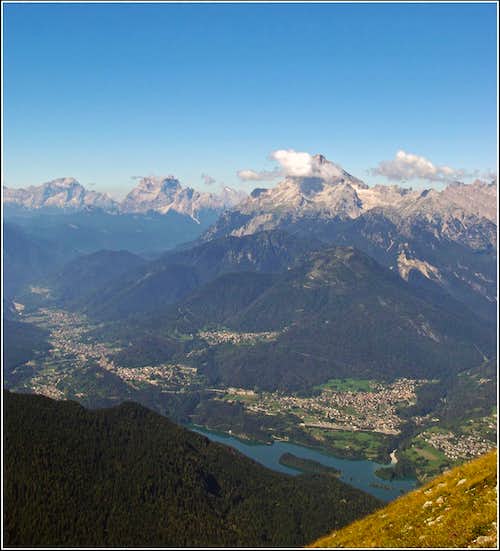 One of the most loved places of the Italian Eastern Alps, the Cadore is basically all the area around the high riverbed of the river Piave. This river, that springs at the foothills of Monte Peralba, runs between the Dolomiti and the Carnic Alps and is sacred to all the Italians due to the tragic events happened in the last year of the First World War.

After the rout of Caporetto ( 10/24/1917 ), where the Italian army lost more than 10.000 soldiers ( and almost 300.000 had made prisoners ), all northern Italy seemed gone. But with great sacrifice the Italian army managed to set a defense line on the river and, after a year of fierce battles, the november of 1918 won the war in the famous battle of Vittorio Veneto.

This area is well known for its rich history. The first inhabitants of Cadore were probably the Celts ( but there are also rests of the prehistoric men ), that settled in the area probably since the VI century B.C. . Then many populations lived in the Cadore: the Romans, the Erulians, the Ostrogoths, the Bizanthins, the Longobards, the Francs, the Carinthians.

After the dark middle age the area became part of the Republic of Venezia and for centuries its population could live in peace. In the last years of the XVII century the French came and a long period of wars started. The Cadore became soon part of the Austrian-Ungarian empire and for more than a century was a contented area, until it finally became part of the kingdom of Italy ( 1866 ).
During the first world war fierce battles had been fought in the Cadore, especially in the mountains, where there are still many rests of that sad years.

The people of Cadore are famous for their hospitality and laboriousness . The economy of the area, that once was based on the agriculture and on the exploitation of the natural resources of the mountains, today is much helped by the tourism and by the factories of glasses.

The best season for hiking and climbing in the Marmarole group is the summer and the early autumn ( from June to October ). Winter ascents are only for very expert alpinists. Some of the huts can be reached snowshoeing in the winter season.

Hiking in the group

There are wonderful hiking routes in this group that can offer some of the best views of the whole dolomitic range. But it must be said that almost all this routes are very long and challenging, recommended only to expert and well prepared people, that know well all the possible dangers of the mountain. Another important thing to say is that the weather conditions in this area can change very fast and in case of storms and heavy rains the paths can become very dangerous, so avoid to plan excursions when the weather is not good. Rescues can be very difficult ( if not impossible ) in some areas of this group. 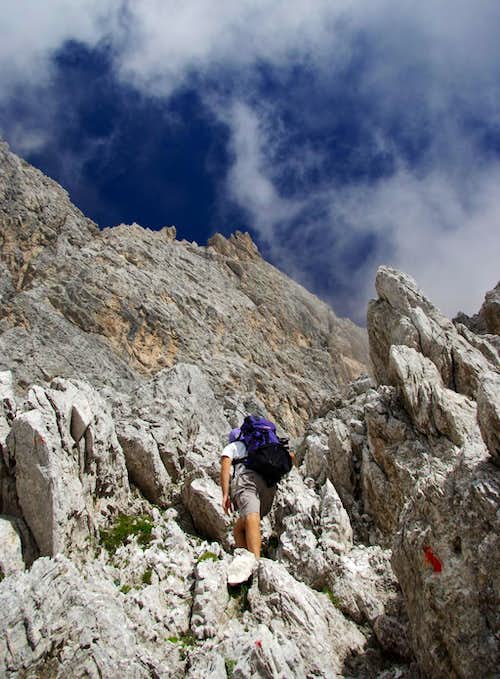 This famous trekking goes through some of the wildest places of the Dolomiti, in the groups of the Dolomiti di Sesto and the Marmarole. It’s a 100km trek that goes from Sesto to Pieve di Cadore and can be done in 6 or more days ( several variations can be done ). The part inside the Marmarole is the more demanding, although some sections have been secured with iron ropes. In particular the path called Strada Sanmarchi that goes from Bivacco Musatti to Bivacco Voltolina shouldn’t be underestimated ( several serious accidents have already happened ) and is recommended only to alpinists or very experts hikers.
The views are breathtaking since the beginning, with this trek you have the chance to admire almost all the famous summits of the Dolomiti Orientali ( but also many of the Carnic Alps and Prealps ) from an unusual point of view, in one of the wildest environment you can imagine in the Alps.

There are interesting climbing routes in the Marmarole, but very few have been often repeated. Here’s a short list of the most known:

There are some nice alpine huts on the southern and eastern slopes of the group, but in the very heart of the group there are only four bivouacs. 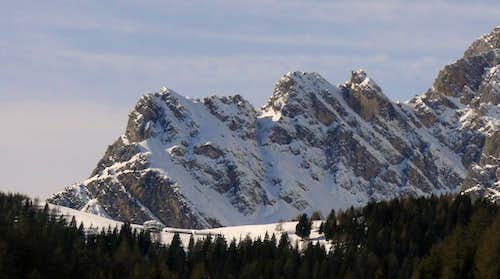 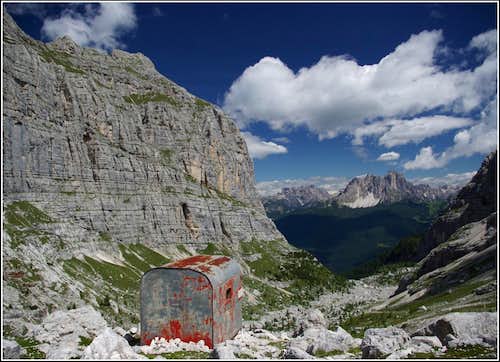