Marmolada – Queen of the Dolomites! Naturally everyone who has travelled the region knows its highest mountain. Located nearly at the centre of the Dolomites both its summits – Punta Penia and Punta Rocca – are higher than any other Dolomite mountain. Antelao, second highest one, (a.k.a King of the Dolomites) “only” reaches 3262m. What most travellers don’t see, however – probably blinded by Maromolada’s great white glacier – is that the Queen is surrounded by some of the region’s highest and most impressive summits.

The group surrounding Marmolada is one of the largest and most complex ones. In complexity it can be compared to the Sexten or Cortina Dolomites. Geologically, however it is even much more diverse. While most of the Dolomites is composed by the rock that gave its name to the region – Dolomite, a special kind of limestone – here right at its centre we can find the volcanic lava ridges of the Padon Chain and the Colac/Buffaure Subgroup. The great contrasts between the black volcanic rock and the almost white dolomite formations – not to mention the large Marmolada Glacier – are among the most interesting features of the region.

The Marmolada Group is a very popular hiking region. Very interesting hiking routes (like Bindelweg /Viel di Pan) and ferrate crisscross the group. Some of the ferrate have been in use since the days of WWI, where the valleys between the Padon Chain and the Sella Group saw some of the fiercest fighting. There was a whole military city below the ice of the Marmolada Glacier and the top of neighbouring Col de Lana (northwest of the group) was blown off in a futile attempt by Italian pioneers to chase the Austrians off this strategically important mountain. Needless to say that the whole war resulted in nothing but loss of life. No ground gained, no ground lost for three and a half years of fierce fighting. Two cemeteries at Passo Pordoi (German/Austrian) and Col di Lana (Italian) still tell the story. For us modern climbers/hikers some of the old trails of WWI have been converted into ferrate, most of them rather difficult.

For overview purposes I have divided the Marmolada Group into eight subgroups (roughly following the division proposed by L.Visentini. Look at the following map to understand their respective locations as well as the location of the Marmolada group in the larger Dolomites context

Much has been said about Marmolada. The mountain has its own page on SP so if you want any specifics, look there. This page (the one you are reading) is meant to put the Dolomite’s highest mountain into the context of the surrounding subgroup as well as the other Dolomite groups. Being located at the centre, it is neighbour to the following groups (starting clockwise from the south, see the map above) 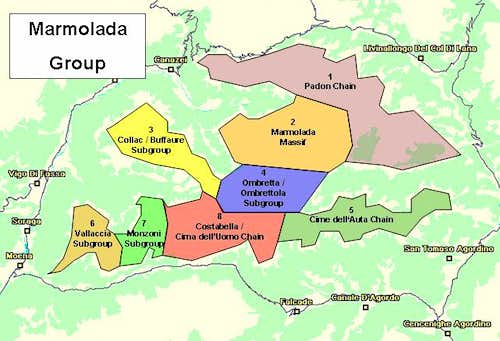 Overview Map of the Marmolada Group. The subgroups are indicated in different colours 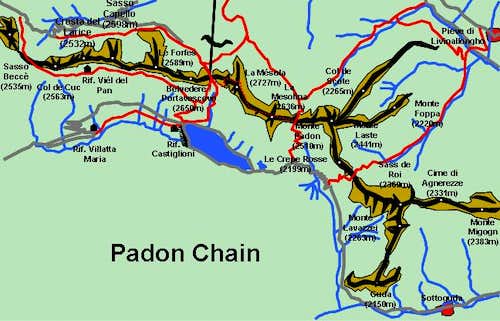 The Padon Chain is long single ridge which runs from west to east and turns south at Monte Padon. There are several side ridges east of Monte Padon. From a geological point of view the whole Padon chain has nothing to do with the Dolomites that surround it. It consists of black lava rocks and thus offers a stark contrast to the Sella Group to its north and Marmolada to its south. It contains a very difficult ferrata, the “Via Ferrata delle Trincée” which is located between Belvedere and La Mésola. The ferrata – like so many in the region – runs along the WWI front and follows the old Austrian positions. In addition there is the panoramic “Bindelweg / Viel di Pan” which starts at Passo Pordoi and crosses the Padon chain near Sasso Beccè and follows the slopes on the southern side of the ridge. 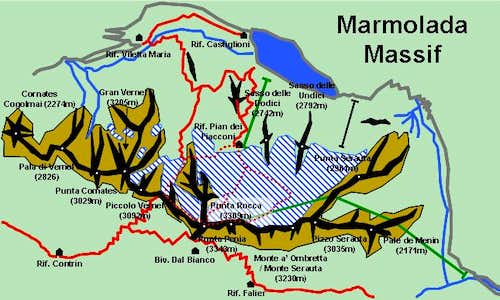 This is the centre of the whole Dolomites. With both summits, Punta Rocca and Punta Penia, Marmolada is the highest mountain of the region. Moreover almost all summits of this central ridge of the Marmolada Massif are higher than 3000m, only the summits at either end falling below that mark. Along the western ridge there is the oldest ferrata of the Dolomites (founded in 1903!!), the so called “Hans Seyfert Weg”. It is a long ferrata which ends at Punta Penia. Due to sudden weather changes the ferrata – which contains a LOT of iron cables, ladders and bolts – can become VERY dangerous, especially during thunderstorms.

The summits are listed from west to east.
Main Ridge 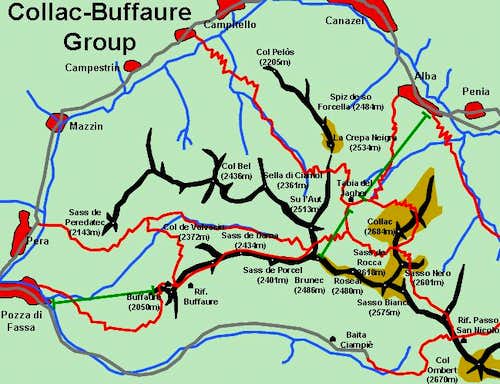 Located between Val di Fassa in the west, Val di San Nicolo in the south and Val di Contrin in the northeast this is one of the most popular hiking destinations in the Marmolada Group. The summits reach an average height of some 2500m and offer great views towards the eastern Dolomites (Rosengarten / Catinaccio and Latemar). There are a great number of rifugios and a cable car up to the main ridge at 2500m which adds to the popularity of the region. On the western end another cable car heads up to Buffaure. Like the Padon chain this part of the group geologically does not belong to the Dolomites since it is also formed by black lava. There are three western ridges which combine at Su L’Aut to form a single ridge eastward towards the last summit, Col Ombert.

Latemar and Rosengarten / Catinaccio as seen across the Buffaure Ridge

The summits are listed west to east with the side ridges north to south. Look at the map for reference.