Martin’s Route:
Martin’s Route is one the most classical and honourable ridge-routes in High Tatras and leads from Pol’sky Hreben to Gerlachovsky Stit /2655 m/. The ridge consists of three major peaks: Velicky Stit /2318 m/, Litvorovy Stit /2413 m/ and three summits of Zadny Gerlach /2640 m /. The original route leads sometimes through the ridge and sometimes traverses the east walls of Zadny Gerlach. The route we climbed- due to snow and ice- sticks more to the ridge: more direct, some traverses led higher than on the original Martin’s Route. The route is long and of alpine character. Ridge is mainly of very good rock but loose stones(below ridge line) or even huge blocks or slabs also occurs. There are many traverses on shadowed faces in the second part of the route, often on grassy ledges which could present great difficulty when wet or snow-covered. Strong winds might be great problem in airy parts of the route. Martin’s route is hard to escape in case of weather or visibility change, be sure to know exit possibilities. 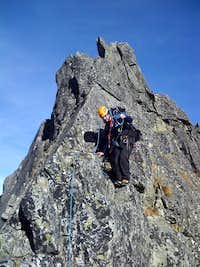 The part between Pol’sky Hreben and Zadny Gerlach goes via main ridge of Tatras. From Zadny Gerlach to Gerlachovsky Stit: via north ridge of the main peak.

In Tatras almost each rock tower and little pass has a name.
Along the route it is: 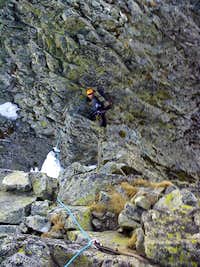 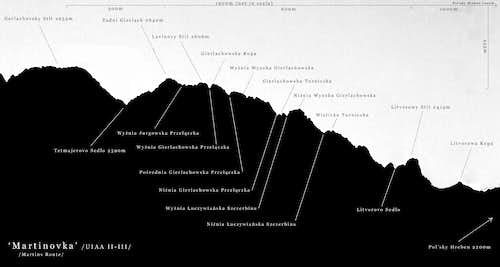 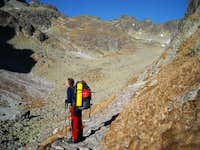 Starting point for the route is Pol’sky Hreben: a huge pass between Velicky Stit /2318 m/ and Vychodna Vysoka /2428 m/. The pass is accessible from both sides:

NOTICE: The text below describes the route brade (Radek) and me climbed in November 2008. It’s different from original summer route in many parts because of snow conditions.

The route description part is divided into three segments. At the end of each there is quite easy possibility to retreat from the ridge.

Part One: Pol’sky Hreben- Litvorove Sedlo UIAA I-II
From the pass turn west. Follow the right side of the narrow ridge on loose scree and when the ridge becomes wider stay on it. The first rocky step climb up trying to stay on the egde, not bypassing on the left, grassy side /dangerous/. The climbing is easy and the rock is perfect.
After that part take diagonal crack on the smooth slab on the right side of the ridge and then follow it to the next rocky step: climb up staying a little to the left. From the top of the step easy to the summit of Velicky Stit.

From the top follow the horizontal ridge until it ends on the top of about 10 meters high cliff. Rappel down to the right placing a sling on huge granite block. /Normal route leaves the ridge earlier to the left/. Reach a small ledge, few meters to the ridge- narrow and exposed at that part- stay on the ridge. When it becomes wider take a zig- zagging ledge to left and follow it until you reach an easy terrain- Velicke Sedlo. 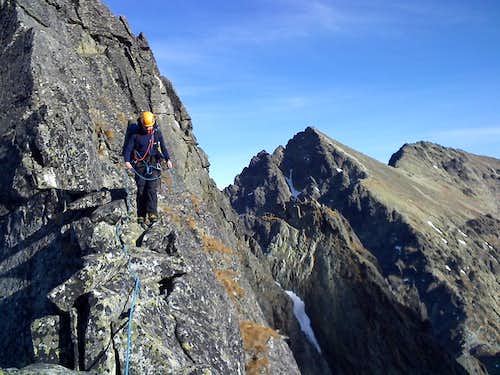 From the pass easy upwards on the rocky grassy steps. Bypassing a rocky tower on the left you spot a diagonal ramp crossing the summit dome of Livorovy Stit on the left side. Take the ramp and reach Litvorove Sedlo /to Litvorovy Stit: 5 minutes of easy ridge/.
There is the first easy escape route: to Velicka Dolina by a scree slope. On the pass there is also a bivy platform. 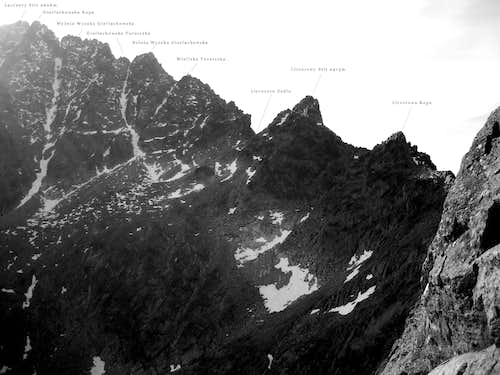 The second part of the route

Do not proceed if weather is unstable or you are short of time.
At the beginning the ridge is wide: climb up trying to stay on the left side. This part is a scrambling with several possibilties of gaining the height. You enter the east face of the mountain. When it becomes steeper climb the face higher staying on the left side of the ridge. This part is pretty complicated /but main direction of the route is marked /rather poorly/ by cairns/. The first rocky tower bypass on the ledges /east side/, climb down few meters find the route in the system of chimneys and ledges. Climb almost to the top of Niżnia Wysoka Gierlachowska.

/Little north-east from the summit is our bivy spot: a small niche, suitable for two persons sitting- the last suitable place for bivy before reaching Tetmajerovo Sedlo/.
By the ridge downclimb to the pass, climb up the next rocky tower and lower down to another pass. Here starts the most difficult part of our route. 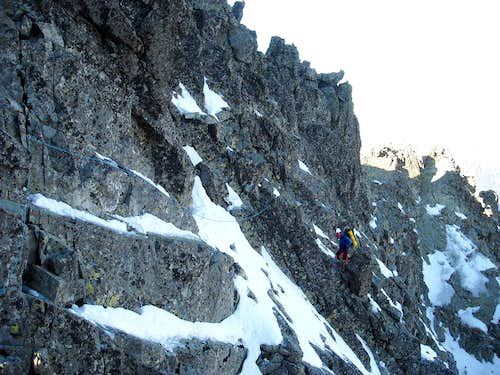 Start at the right side up to the one third of Wyżnia Wysoka Gierlachowska headwall, traverse to the left and climb up to the ridge. Follow the exposed ridge /easy/. Do not take a ledge to the left but climb few meters up on a smooth slab on the ridge, then on left side and climb down to the little pass /hard snow/. 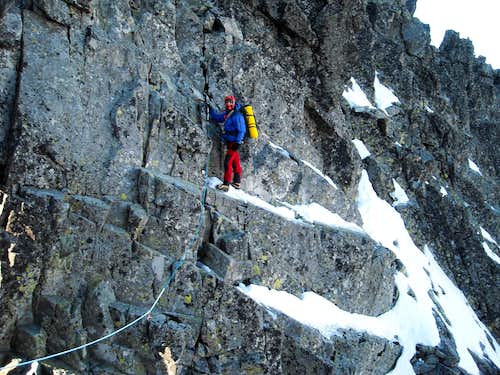 Staying at the left side, above snow/ice covered ledges make an exposed traverse, pass the little col directly on the ridge, traverse left /hard/ and up using a vertical crack on a small ledge on the left side of the ridge /rejoining the normal route, cairns/. 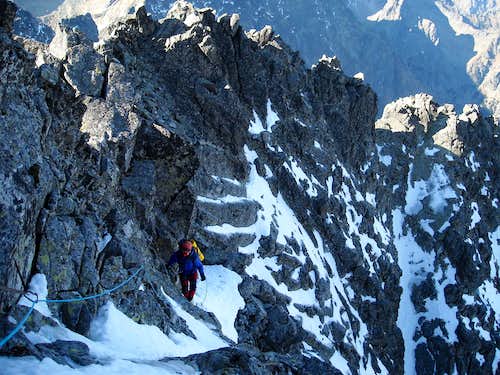 Leave the normal route by climbing up a snowy chimney, then make a traverse and after few meters of down climbing join the normal route again /a cairn on an exposed rocky ledge/. Follow the system of ledges to the ridge and then to the top of Gierlachowska Kopa.

From the top, by the ridge, rappel down /15 m/, crossing the next pass then up to the summit of Lavinovy Stit. From the summit a little on the right trying to pass above the little snowfield /difficult with heavy backpack, under overhanging rock/. From there upright by a chimney, /loose slabs/ then left and by the ridge to top of Jurgowskie Czuby.
By the ridge /exposed/, then little down and from the left side to the top of Zadny Gerlach /summit box/.
The ridge at the beginning becomes narrower, but still without difficulties down to the narrow Tetmajerovo Sedlo.

Part Three: Tetmajerovo Sedlo- Gerlachovsky Stit /UIAA II-III/
The last part of the route is technically the most demanding but also the easiest to find. It could be divided into two parts: the steep (but not vertical) and the horizontal but narrow summit ridge. 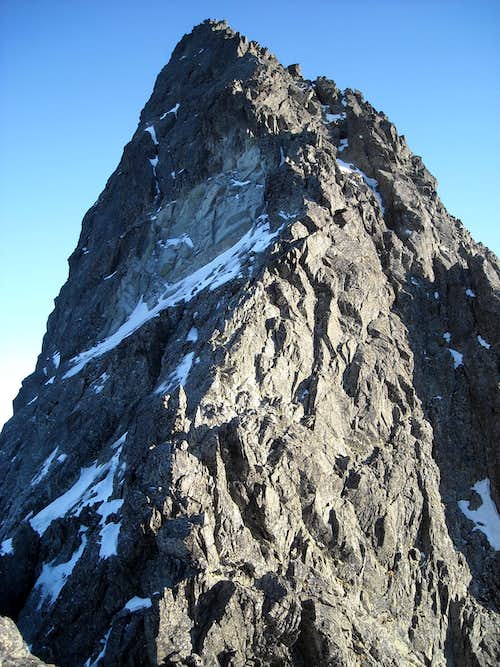 Starting from the pass take the right (West) side of the ridge. The rock is of very good quality. Stick close to the ridge avoiding temting traverse possiblities to the middle of West face. Most difficult part is in the middle of this part but the protection is really comfortable. After reaching the horizontal part the highest point comes into view. Follow the ridge climbing down and up some few meters deep gaps (majority of them are narrow, could by jumped over). 1,5-2 hours from the Tetmajerovo Sedlo.

Have in mind that the route is long and in fall/winter you will have to have a bivy. The last running water: in the valleys so be sure that you have enough.

For problems like 'getting there', 'accomodation', 'red tape' and 'mountain conditions’ have a look at main page of Gerlachovsky Stit.