This page started with my intention to create a Rock page for Quincy Quarries. I wanted a place to put my photos while that page was under construction, so I created an album, which soon expanded to "Massachusetts Crags". It became a peculiar album, with text descriptions of various climbing areas. I decided it made more sense as a List,and I'm thinking of expanding it to cover all of New England so it can link to more existing SP pages.

Quincy Quarries is arguably the largest, best and best-known climbing area in the immediate vicinity of Boston.
Many climbs are slabby, but you can also find finger cracks, laybacks, sustained overhangs, and a big roof. Routes range from 5.2 to 5.12 and V4, but beware: ratings at Quincy, like those at the Gunks, have a reputation for being sandbagged.
Located in Quincy, next door to Boston. 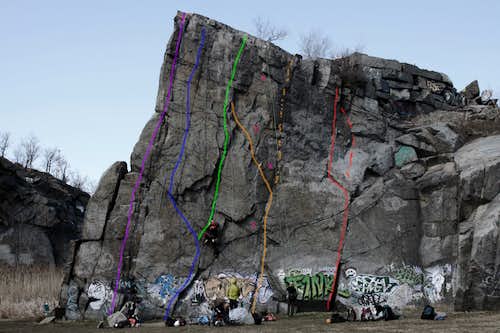 Located very near Quincy Quarries and therefore sometimes overlooked. Short but often interesting climbs, and usually uncrowded thanks to having a longer approach than Quincy Quarries. More info on the Rattlesnake Rocks page.

Quincy's closest rival for the title of "best climbing area in the Boston - route 128 area", though it lacks verticality. Scattered through the woods are multiple large (and some small) boulders, most with multiple toproping routes. The rock is Roxbury puddingstone, allowing for a variety of routes: face climbing on tiny dimples, muscular overhangs on jugs, and some cracks. The "lower wall" in particular has a number of cracks that are great for new leaders, and the "alcove" has some highly overhung bouldering. Located near the Chestnut Hill Mall, in Newton near the Brookline boundary. 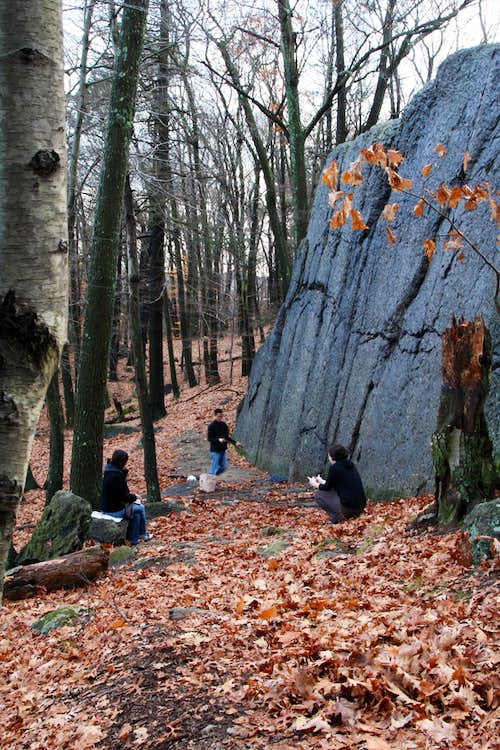 An also-ran in the "inside route 128" category.

A number of boulders scattered about, and a couple of decent-sized crags (Black and White Rocks). Generally the landings aren't great and the climbing is so-so. But noteworthy for the closest ice climbing to boston: Cascade Falls. Located just north of boston, straddling interstate 93.

See also the Middlesex Fells page here on SP, which has links to additional info about rock climbing in the Fells.

main face
A willingness to travel outside the rte 495 ring has its reward: big, clean faces (relatively speaking) make this a fun place to climb. Mostly toproping, with some trad-leadable routes. Located in Leominster State Forest, near Fitchburg.

Located in Hopkinton, better known as the starting point of the Boston Marathon.

I've walked through this state park located south of Worcester, but not climbed here.  You are very likely to have a large audience, as the chasm is often jammed with folks walking the bottom or above the sides, or scrambling unroped along the easier routes.    _Boston Rocks_ lists climbs from 5.5 to 5.11 scattered along "a chasm [that] runs for a quarter of a mile with walls of Milford Gneiss that rise as tall as 50 ft", but don't expect a quarter-mile of clean faces.  It's mostly a jumble, with a few vertical faces and a couple of wicked overhangs.  The state's attitude toward climbing has evidently changed since the 1970s.

This flood-diversion tunnel exit carries a faint whiff of sewage and the bottom is usually flooded, but it does offer some steep ice climbing only an hour from Boston. Best to go on colder days when the floor is solid and the odor is minimal. Top-roping from trees is the norm (bring very long slings). It's common to rap in and climb out, though a scramble exit (furnished with a slightly manky fixed rope as of January 2011) exists and a walk-out (or at least wade-out) is always possible.

Located in Auburn, MA, near Worcester. The head of the "canyon" is within shouting distance of Curtis St, but to avoid private property the usual approach is through the woods from the power-line cut to the south (park on Westec Drive). 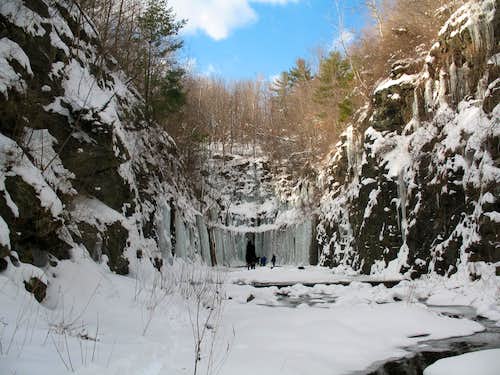