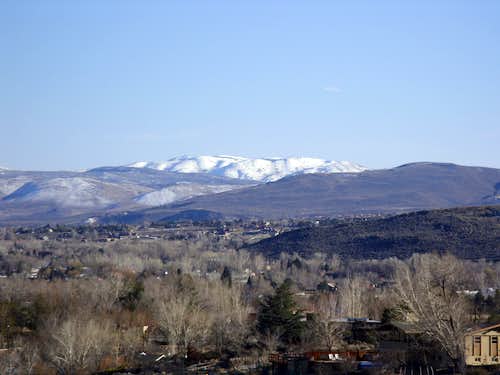 The Plateau from Reno, Nevada

The Mount Scott and McClellan Peak plateau is a prominent mountain located about 17 miles south of downtown Reno, Nevada. It is located in the southern part of the Virginia Range, just 4 miles southwest of Mount Davidson, the highest mountain in the range. Mount Scott 7,467' and McClellan Peak 7,457' are not well known to hikers. Most people who visit the summit use off-road vehicles or motor bikes. The reason the off-road appeal is due to the mountain being cut by numerous dirt roads. The roads are generally too steep and narrow for jeeps. This is not only ideal for motor bikes to use for off-roading, it makes it easier to hike. The mountain plateau rises about 2,400 feet above Washoe Lake. The easiest route is from the south via Goni Road, which results in an easy hike.   The top of the plateau is full of cell towers which certainly removes much of its charm. However, views from the plateau are quite grand. There are excellent views to the Sierra Nevada Range to the west, Como Peaks and Rawe Peak to the south, and Reno and the Virginia Range to the north. On a clear day, you can see for many miles all around. Even on a partly-cloudy day, looking east, I could see snow-capped mountains in North-Central Nevada, which are between 80 and 100 miles away.

Snow Valley Peak 9214' from the plateau. 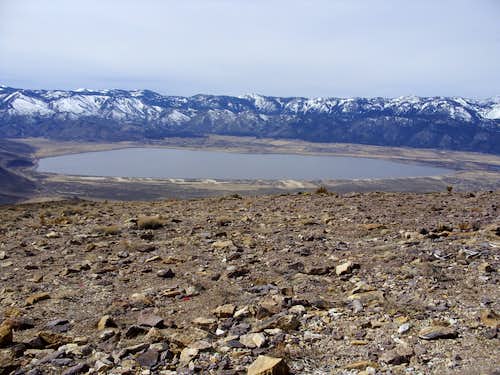 Washoe Lake from up on the slopes of the plateau.

It is best to hike the Mount Scott-McClellan Peak plateau during the spring and fall or late winter.  Just avoid hiking after too much rain. During the summer, there are plenty of snakes to go along with the heat.  Besides snakes in summer, there is wildlife on the mountain. I did not see any wild horses when I was there, but they do graze on the mountain. I saw bobcat tracks on the snow while descending the mountain in 2009.

The easiest way to get to these peaks is Goni Road.  As of late May 2019, 2WD can get to a junction at just under 6,500', which is about 2 1/2 miles from McClellan, and 2 3/4 miles from Mount Scott, with 1,000 feet of elevation gain.  4WD can get pretty much to the summit itself.   To get to Goni Road, take 580 South, follow the main highway. Take the main exit to Carson City. Head south for a quarter mile and take a left on Arrowhead Road; or just take College to Goni Road.  After about 1¼ miles north from Arrowhead Road, the main road leaves residential areas and hits the lower slopes of the plateau and turns right before a mine.  Three miles past the mine, you can park.  Take a right or left and either reaches the summits.  Going right is shorter.  After 2 1/4 miles McClellan Peak is on the left.  Mount Scott is just a bit further on the right.

There is a steeper, moderate distance hike that starts at the Ranger Station on the southeast side of Washoe Lake.  A road heads up slope for about 1 3/4 miles and just past when it switches back 180 degrees, you then take a gully 950' in 1/2 mile.  Then hike up to the plateau and bag the summits.  That is an 8 mile round trip hike gaining over 2,500' for both summits.

Finally, there is a short steep route up the Jumbo Grade Way. This route is over 3 miles to the summit, and is really steep. The start of the route is about 5,460 feet. To get there, take 580 South from Reno and get off on Virginia Street southbound, and head south, towards Washoe Lake on 395. Just past Pleasant Valley, get on Route 428 (East Lake Blvd), and head south towards Washoe Lake. Once on East Lake Blvd it is approximately 3.8 miles to Jumbo Grade Way. Take a left on Jumbo Grade Way and continue up the road for a mile. At this point there is a trailhead parking area at about 5460'. The start of the hiking route is obvious.  Hike up the dirt road for 1/2 mile to a dirt road up a hill with a very steep grade. It climbs 450 feet in about ¼ mile up to a cairn at just under 6,000 feet. 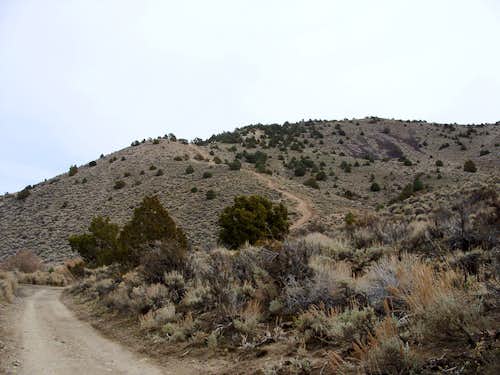 The start of the hiking route from Jumbo Grade Way

Once at the cairn, follow a narrower road which continues for another ¼ mile, climbing another 490 feet to a plateau. The plateau continues for about ½ mile to a large dirt road. Take a left at the large dirt road, and head up another steeply graded road. This road climbs 350 feet in less than 1/2 mile until it crests another hill at about 7025'. At the top of this hill follow the road as it descends slighty and hike up another 250 feet in 1/3rd mile. From here the McClellan Peak summit is only ½ mile away. The cell towers are visible at the top of this hill. There are two hills that look the highest. The one on the right has a cell tower, and the one on the left is bald. Head towards the bald summit. This is not the true summit, but it leads to the true summit, about 200 yards further.  For Mount Scott, head another 1/3rd of a mile further northeast where some other buildings are located.  All told, hiking this way is 3 1/4 miles one way to tag both summits with an elevation gain of over 2,100'.  The true saddle between the two summits is at about 7,368'.

Most of the mountain slopes are on land managed by the Bureau of Land Management. However, the lower slopes contain some private land.  As for the ranger station, make sure to stay south of East Lake Blvd.  There is another road just east of the Ranger Station at the Deer Ranch. The road is open for the first quarter mile, however, if you drive up the well-graded dirt road any further, you will soon be greeted with a sign that says “want to know if there is life after death? Trespass and find out!” Fortunately, the other three routes are open to the public. Please stick to those routes.