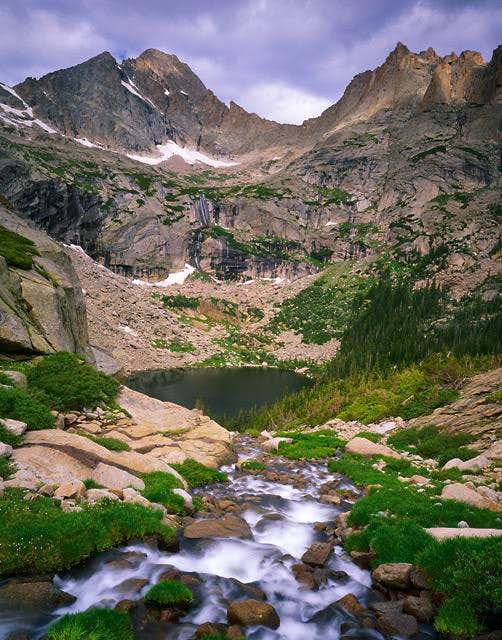 What an incredible photo. I am awed.

That is the best photo of McHenry's I have ever seen!! Great job!

I have seen this view of McHenrys and Arrowhead in many pictures, but this one surpasses them all by a wide margin. I know next to nothing of large format photography, but I'm still curious about the aperture and shutter speed used for this picture.

It would probably surprise few of you if I told you that surfing the photos on summitpost convinced me to do this trip last summer. This site is so great for "photo beta!"

We camped at the Glacier Gorge campsite, and as my buddy stayed down by Ribbon Falls for sunrise, I kept on hiking up. (I might post another shot of alpenglow from near this spot on the way up high into Glacier Gorge.) I left 25 sheets of film in the tent. Stupid, stupid, STUPID! So I only had about 20 sheets and several rolls of 120 (medium format) film for an entire morning of incredible light and clouds. This shot was actually the last sheet of 4x5 film I shot on the way back down to camp. I'm standing on an enormous flat rock that splits the creek, giving me this birdseye vantage point. My buddy had made it up to where I was earlier, so he was with me for this one. Given that he had a wider lens on his 35mm than my 90mm lens, I convinced him to shoot so that the rock at his feet was included. His turned out pretty well, too.

As for aperture/shutter speed, I don't record those things, as I shoot so much, and have been doing it for so long, that I set the camera at whatever the scene calls for, take the shot, then move on. Count on f45 at at least a few seconds, if I had to guess.

Sorry for the long-winded response. Thanks for the comments.

I've had lunch on that very same flat rock and shot a picture from there as well. It's quite the spot. Although my picture looks nothing like this.

a place that I love so much. What a phenomenal shot.

Thanks for sharing! Beautiful composition and luminosity :)

This is just a great shot of amazing mountain!