In late summer of 2017, John, a good buddy of mine moved to Colorado from an eastern state, which enabled us to meet more often, and, of course, to now hike together in The Rockies. As we discussed where our first hike would be, we quickly realized that Medicine Bow Peak almost equidistantly jutted into the sky between our homes. And what better way to summit this peak after such a failure a month or so earlier? Our rendezvous point would be just off WY 130, the Snowy Range's Scenic Byway, in a parking area on FS RD 103. Snow was falling steadily as John pulled into the parking area. We packed things into my vehicle since mine had slightly higher clearance, but we still turned around after driving a mile or so toward the Dipper Lake trailhead. This prompted our decision to start hiking from the Marie Lake trailhead, which was immediately accessible via WY 130.

After driving down the road a few miles, we prepared to head up the mountain with snow falling steadily. 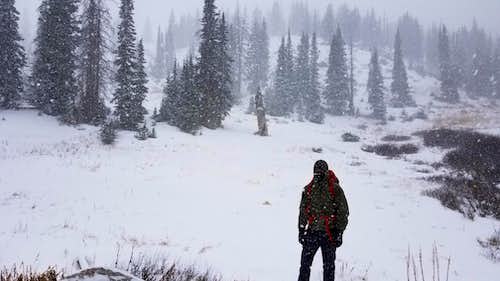 We were both suited up with plenty of insulation and supplies since it was cold and since injury or disorienting weather may force us to camp out on the mountain. As we began our ascent, both of us felt somewhat out of breath and/or lightheaded. The weight of our packs, the trailhead's elevation of 10,000 feet, the snow, and the steepness between some of the switchbacks made for a challenging first mile. We rested perhaps every 100 yards as we proceeded up the slope. As the trail leveled out, we found ourselves above the treeline, exposed to one of the real adversaries we'd face on this journey.

Neither of us had been in winds of this nature. Our noses soon felt cold despite our masks' insulating efforts. John quickly took the lead given his seemingly better power-to-weight ratio. He, unlike me, had also been wise enough to bring trekking poles. Nonetheless, we both began postholing, sometimes plunging a leg into snow up to waistline, which prompted our abandoning of the summit attempt. Had the terrain remained shallow with snow, we might've very well continued onward around the mountain and up to the peak. But the chance of traumatizing an extremity in snow pockets of unknown depths seemed a good enough reason for retreat. We would plan to return either with snow shoes or when we wouldn't need them, in the summer.

The route back down was not without hazard, for in various areas a hiker must maintain good footing or balance to avoid toppling down any number of slopes on the route.

Upon reaching our vehicles, we headed down the now-slushier-than-before WY 130 to, if memory serves me correctly, the Libby Creek campgrounds. 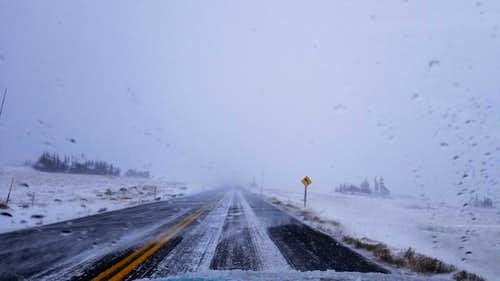 Snowy WY 130 on the way to the camp site after the summit attempt.

A drop box at camp allowed for our small payment, and the evening turned into night as the creek flowed behind us. Another day was sure to come when we'd finally see the top of Medicine Bow Peak beneath our boots. 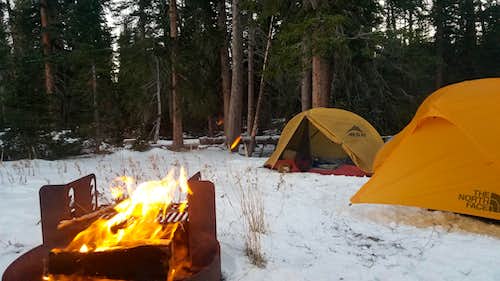 Camp after retreating from the Western wind blasting on Medicine Bow