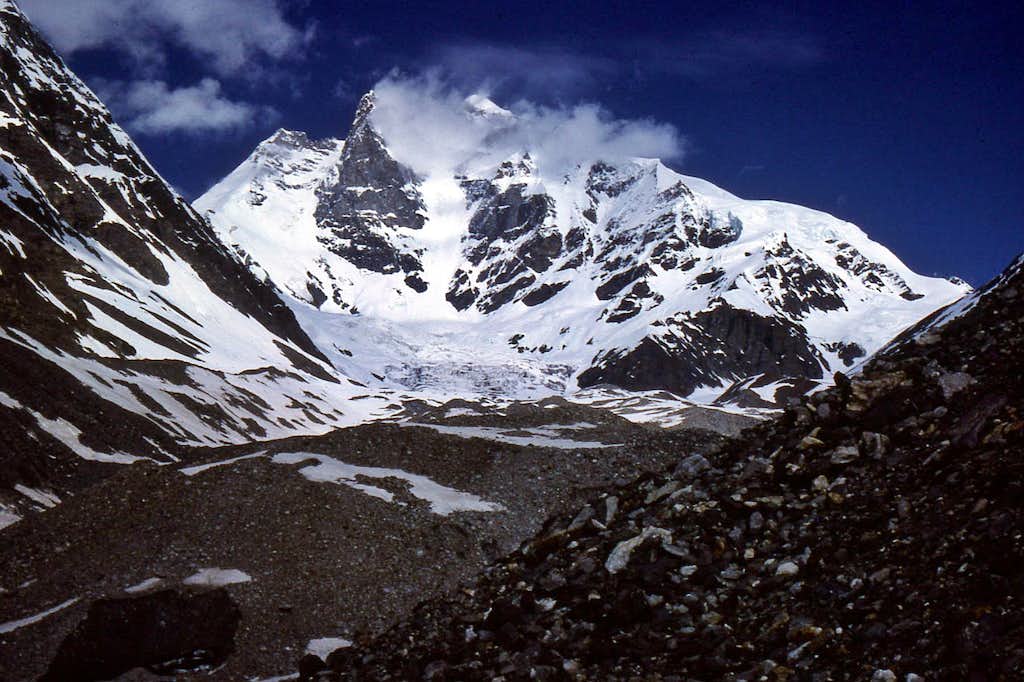 At 6440m (21,140ft) Menthosa is the 2nd highest summit in the Lahaul-Spiti Province of the State of Himachel Pradesh in Northern India. (Highest summit is Mulkila 6517m – 80km further to the southeast – page to follow). It was first climbed in 1970 by a British Service Team led by Capt S. Bembrose. Royal Marine Lt S. Rae and R.E.M.E Capt R. Cape were the only two members of the team to reach the summit.

The mountain had been reconnoitred the year before by an Anglo-Indian expedition co-led by Dave Challis, who subsequently became my mentor so far as mountains are concerned. Dave led another and very large British expedition to the area in 1978 composed of staff and students from Kings School Ely. They climbed 11 peaks – including making a 2nd ascent of Menthosa.

Dave himself wasn’t with the team that made this ascent – and he returned to the area for a 3rd time in 1983, hoping to fulfil his personal ambition to summit. This was a much smaller team composed of himself as leader, Barry & Rob White – and myself, aged 22, as newly qualified ‘climbing doctor’ (thankfully nobody was ill!).

Barry & Rob dropped out due to difficulties acclimatising, having reached around 5250m. After a few days of bad weather and having had to move Camp 1 to a more optimum position on the Urgos Pass, Dave and I set out to make a single upward push for the summit. We camped at 5650m and then at 6000m before making our summit bid. Conditions at last were good and we reached a high point of around 6250m on the summit ridge. But sadly it was not to be: wearing my new ‘1st generation’ double plastics, I was unable to warm my feet. With frostbite threatening and believing we still had over 300m of ascent Dave insisted on retreat. We were just barely acclimatised to the altitude and he felt not unreasonably that we would take several hours more to reach the summit – by which time I may have suffered serious damage. In the event I suffered some minor damage – but having later established that we were much closer to the summit than we had thought, it still rankles 28 years later that we hadn’t pushed on.

Over the years Menthosa has had a fair number of further successful ascents, but a few failures too. All of the ascents I have heard of have been via the original route – from the Miyah Nullah and via Urgos pass at 5100m. Undoubtedly other routes are possible – but may be more difficult both in terms of access and technical difficulty.

Tragically Dave Challis died back in the mid 1990’s.

For most, the journey in India would start in Delhi. The next objective is Manali, the alpine resort town in the Kulu Valley, some 520km from Delhi by road. Manali is easily accessible from Delhi by rail and air as well as road. Most doing the journey would travel by bus, which as well as being relatively cheap, provides a unique opportunity to see something of India – and the extraordinary transition from endless northern plains to foothills and finally the mighty Himalayas.

Manali is a bustling, noisy Himalayan community, by all appearances like a bit of Tibet transplanted into a valley in the Swiss Alps. It is a great place to stop for a day or two just soaking up the atmosphere – or to make last minute purchases and arrangements. 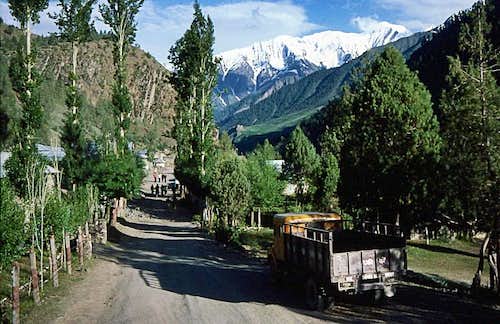 Udhaipur is a bit of an Oasis. 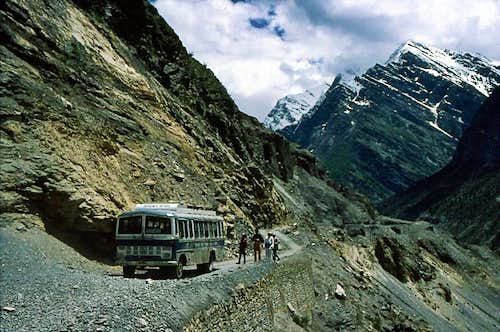 Bus in the arid Chandra Valley. 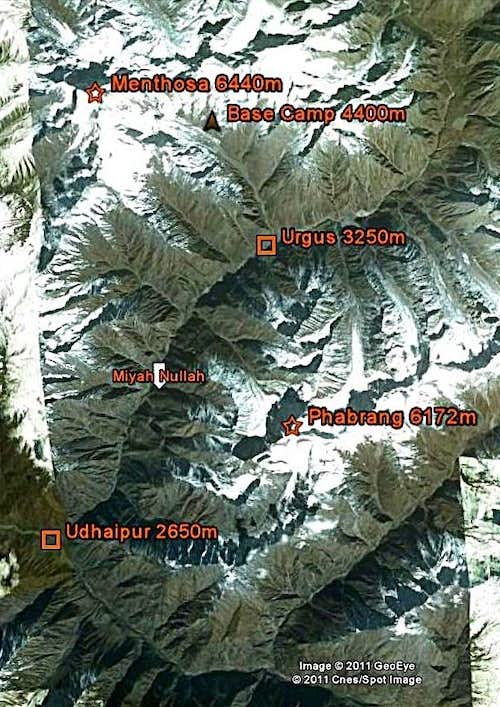 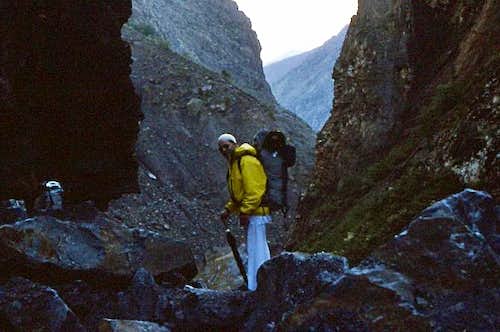 It is essential to visit the website of the Indian Mountaineering Foundation (IMF) – see link below.

All peaks of over 6000m and many 5000m peaks require application for a permit and payment of a peak fee. In addition, most expeditions to these peaks require the presence of an Indian Liaison Officer (LO), who has to be both equipped – and insured. Any porters hired require certain equipment – in addition to insurance. Administration for all these requirements is through the IMF.

At the current time Peak Fees for summits of less than 6500m are of the order of US$500 for two, US$200 each for expeditions of 3-7 persons. As for peaks of over 6500m, the Lahaul-Spiti area has just the one; Mulkila at 6507m – and fees are US$700 for two, US$300 per person for an expedition of 3-7 persons. These fees do not include LO/porter insurance and equipment. If you want to climb more than one mountain, then I understand each additional peak fee is reduced by 50%.

IMF registered tour operators: a number of companies are listed on the IMF website. These can provide anything from all included guided expeditions, to ‘climber assist’ type services, tailored to individual requirements – providing help with such as application formalities, travel arrangements, portering – and advice. In the External Links section below I have provided the link to just one travel operator ‘Ibex Expeditions’ – which I used both in 1983 and 1985 – and is still going strong under the same director, Mr Mandip Singh Soin! Mandip provided a great service over 25 years ago and from the persistence and expansion of his organisation, I have every reason to suppose he is still doing the same now.

Camping is a straight forward matter in the Miyah Nullah. In 1983 we camped at the village of Chamrat, in the grounds of the local school and then bivvied half way between the final village at Urgos and Base Camp, in order to acclimatise better.