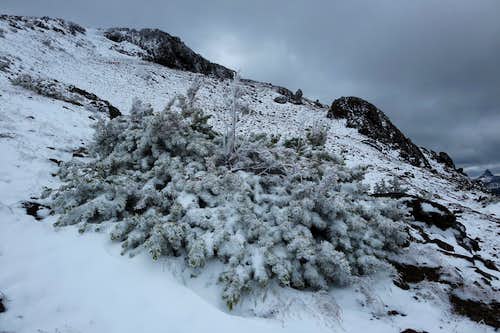 Rime on Meridian After a Summer Storm
Almost anyone staying in or just passing through Silver Gate, Montana, is abound to notice two peaks soaring above town to the north.
One of those peaks, directly behind the town, probably is the more spectacular of the two because of the steep, sharp triangular aspect it presents to Silver Gate. It, however, is not actually a peak but rather the highpoint of the southeastern spur of Mineral Mountain, which is not visible from Silver Gate.
Meridian Peak is part of the rugged and wild Northern Absarokas and is in Yellowstone National Park as well. Its summit lies just west of the park boundary, as in literally less than a tenth-mile west of it. The ridge connecting Meridian and Mineral, and Mineral's summit, are directly on the boundary, yet Meridian is just slightly off it. Whether there is some strange story behind this or it is an error on maps, I do not know.

The other, slightly more distant and to the left of the spur, and appearing higher as well (and it is), is Meridian Peak, once misspelled in some sources as Meridan Peak. 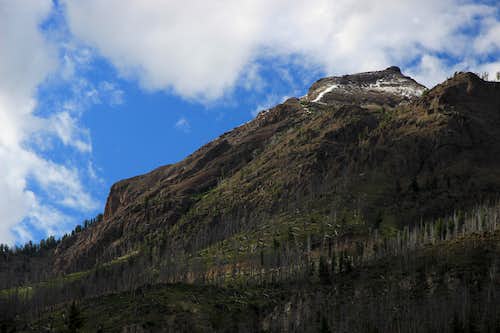 Meridian Peak
Although the peak is so close to paved roads and a community, it does not seem to see much visitation, and that is because it is not easy to reach. The shortest route to the summit is going to be very steep and features what appears to be a lot of loose talus; also, it might have difficult scrambling. A longer way, and the way I took to the summit, though not the way I descended, features a significant amount of off-trail travel through forest. While the climb is not technically difficult, Class 2+ at the most, it is tedious, and if there has been any rain or if there is morning condensation, you are going to get good and wet on this route. On a snowy July day (yes, July), my legs and feet got soaked, but I foolishly wore approach shoes instead of boots. 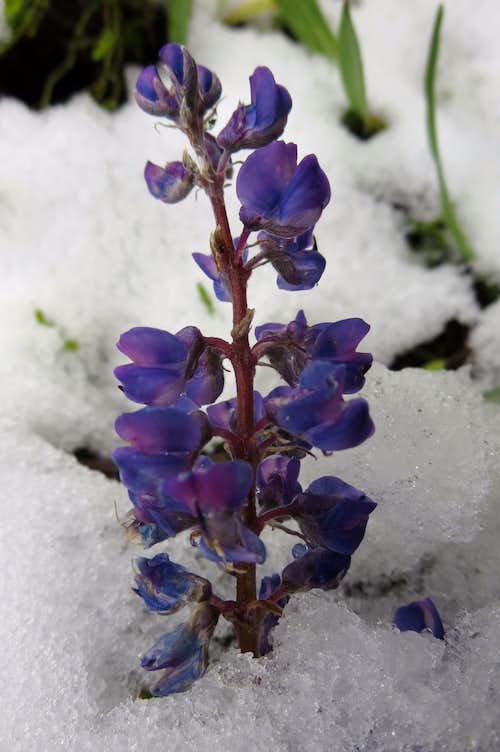 Lupine in Snow
Also in spite of its proximity to roads and people, the peak has quite a wild feel to it. Views take in some of the best wilderness in Greater Yellowstone.
In Select Peaks of Greater Yellowstone, which now seems to be out of print, Thomas Turiano writes that back in the 1990s MSU grad student Nathan Varley climbed Meridian and several other peaks in northeastern Yellowstone and placed registers atop 10 of them, including Meridian. When I was at the summit in July 2015, I found neither a cairn nor a register, and I can come up with two plausible explanations for this: 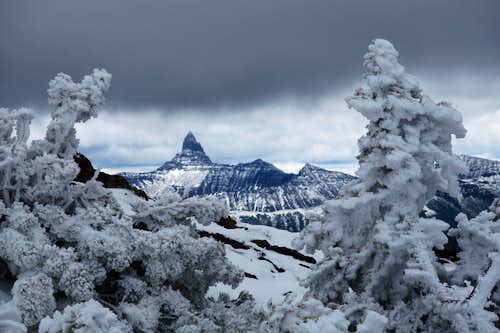 Rimed Trees Framing Pilot Peak
As you approach and climb the peak, keep a lookout for wildlife, both out of caution and enjoyment. The peak is in what people like to call "prime grizzly country," but there are other animals out there, too; there is a good chance of seeing bighorn sheep, and I found the skull of one during my descent. 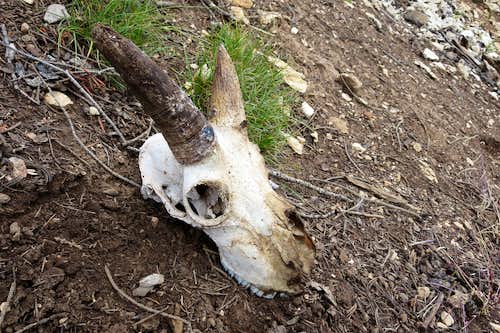 1.2 mi from the northeast entrance of Yellowstone, park at the Warm Springs parking area, which is on the north side of the road. This is the eastern end of the Pebble Creek Trail.

If you want to try this peak from Silver Gate, a way which would be shorter and more direct, pull off the road where the Silver Creak drainage meets the road between Silver Gate and Yellowstone's NE entrance. Even if the creek is dry, it should be pretty obvious where the drainage is.

From Warm Springs, the trail gains over 1000' in about 1.5 mi, sometimes yielding superb views of Amphitheater Mountain and Abiathar Peak across the drainage of Soda Butte Creek. At the end of that 1.5-mile stretch, you reach a broad, forested pass.

Now leave the trail and head right (E-NE) along the ridge, which at first is so wide that it does not feel like a ridge at all. Stay to the right as much as possible for two reasons: (1) there occasionally are some very nice views to the south and (2) there is often a good game trail to follow.
After reaching Point 9595T, drop almost 300' to a saddle in a burned area. Views open up at this unranked summit and remain good the rest of the way. 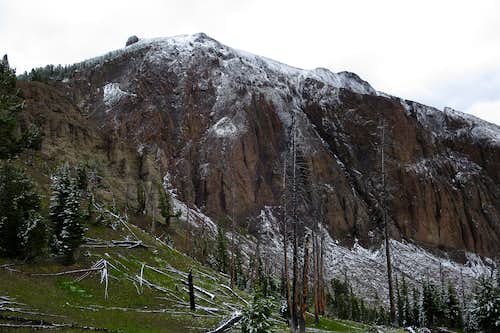 Meridian Peak from just above the saddle
From the saddle, work up the obvious ridgeline, which soon broadens so that it really is no longer a real ridge, to the summit. Along the narrower sections, which can be very steep, you might encounter a little clambering action, but this really is just a steep hike. Watch out, however, for long, steep drops to the right during the lower portion of the ascent.
This route is 6-7 miles one-way and has about 3400' of elevation gain (taking into account the loss incurred when one has to drop from Point 9595T to the saddle). 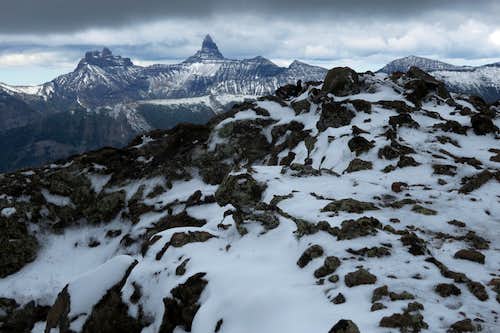 The Summit Framing Index and Pilot Peaks
From Silver Gate
I believe this way will go, but this is only based on a visual assessment from both high up and below. There is no guarantee from me that this route will work well or even at all.
Head up the Silver Creek drainage. From the burn-area saddle mentioned in the previous route description and from points along the final ascent to the summit, I felt fairly certain that it would be possible, albeit very steep and very loose, to get from the upper basin of Silver Creek to the saddle. In fact, I had marked this as a bail option in case the weather deteriorated, as this would have taken me almost straight back to the motel I was staying at in Silver Gate, and I could have walked back to my car in the morning.

There also appeared to be ways up to the southeastern ridge of Meridian, and they looked like scrambling routes with some route-finding challenges.
Going up from Silver Gate would mean 3-4 miles one-way, with about 3100' of elevation gain. 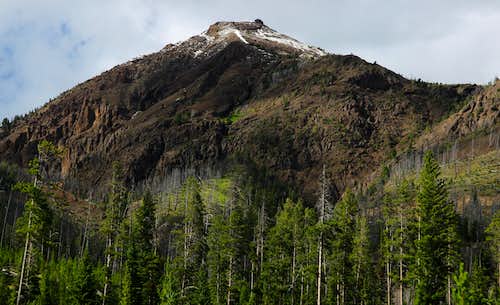 Meridian Peak and Mineral Mountain are connected by a short ridge (less than half a mile), are nearly the same elevation, and have a drop of only about 200' between them (meaning the lower of the two is probably not a ranked peak). Thus, pairing them together seems like the perfect thing to do, and that had been my plan. When I was at the summit of Meridian, though, I found the ridge to be much more rugged than I had expected it to be (I thought at least Class 4, and with some nasty-looking spots with serious exposure). Given the bad weather conditions that day, with all the snow and wet rock present, and my worries that the poor weather would return, I decided not to go for it, adding it to one of those things I want to go back and do. If anyone has done this traverse, please share some beta on it. 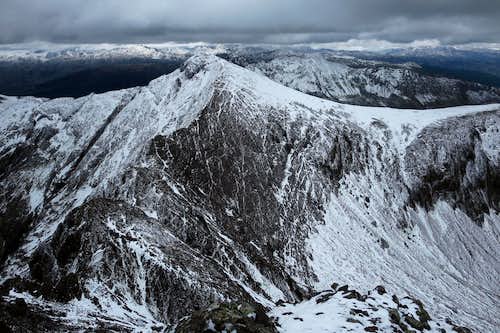 The park entry fee for Yellowstone was $25 as of July 2015, and that fee covers a week of access. Other passes are available at higher cost but at better value depending on your usage. If you try the approach from outside the park, you don't have to worry about any fees.
Parts of Yellowstone are virtually littered with antlers, petrified wood, and minerals. It is illegal to remove any of these.
Carrying pepper spray is highly recommended. There are a lot of grizzly bears in Yellowstone, and the northeastern section is one of the best habitats for them.

This area is open all year, and, properly equipped, one could climb this peak in any season. However, summer and early fall are the best times for good weather and snow-free conditions. But don't count on it, as you can see from many of the pictures.

There are two campgrounds in this part of Yellowstone, Pebble Creek and Slough Creek. Pebble Creek is much closer to the Meridian, and Slough Creek is farther west. Both tend to fill early, often by 9 A.M., and all sites are first-come, first-served. These campgrounds have water and pit toilets.
If you cannot get a campsite or choose not to, there are lodging options in Silver Gate and Cooke City.