Merriam Mountain (a/k/a Merriam Crater) is one of the largest of the cinder cone hills that dot the landscape surrounding Humphreys Peak in Northern Arizona. Merriam Mountain is located on the extreme east "edge" of the San Francisco Volcanic Field, at the transition from the volcanic lands (cinder soils) and the mesa and plateau country of the Navajo Nation (sandstone, high desert). The peak sits in a narrow band of private and Arizona trust lands tucked between the Coconino National Forest to the west, and the Navajo Nation to the east. From the summit, the views are stunning: a full vista of the big peaks and cinder hills to the west, and the endless Navajo country to the east. Merriam Mountain is a symmetric hump of cinder, with no trees and no foothills. As a result, it is a popular jump-off point for hang gliders, soaring planes and radio-control planes.

The hill is often called Merriam Crater. The map shows the name "Merriam Crater" directly over the caldera. The benchmark (which is not there anymore) was called "Merriam". 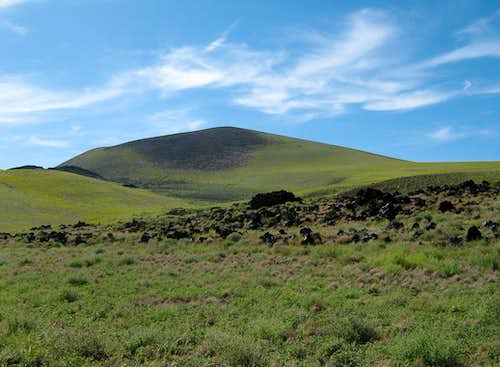 At the junction of Interstates 17 & 40 in Flagstaff, go east 12 miles to Exit 207 (Cosnino Exit). Go north on Cosnino Road two miles to Townsend-Winona Road. Turn right and go about three miles to Leupp Road. Turn left and follow Leupp Road about a dozen miles northeast through the hilly juniper-pinion countryside. Merriam Mountain comes into view, a big symmetrical hump of cinder with an obvious crater on its top (see photo). 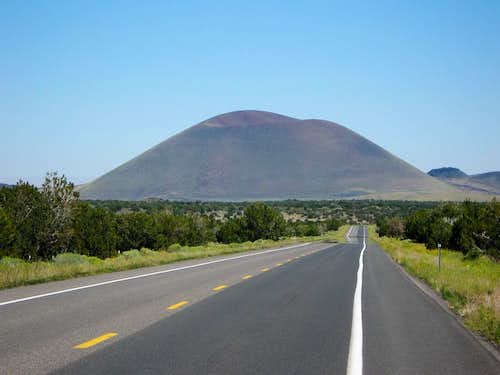 Where Leupp Road crests a small pass between Merriam and North Sheba (the cinder hill due south of Merriam), turn left onto a dirt road at approximately N-35.320, W-111.263 (NAD-27). Go north on this road for 1.7 miles to a junction, where the left road shoots straight up the east slopes of the peak. Park in the clearing here.

Total mileage from Flag is about 30-35. If you should drive past the dirt-road turn-off (like I did), do this: go another 1.2 miles east to the Navajo Nation Boundary, turn immediately left (north) onto Indian Route-70 for about a mile to a small church, then make a hard left back onto Arizona trust land, going about a mile southwest to the only main road going north. The land is open and you can see everything clearly.

The final road to the parking area is slightly rough. High clearance would be suggested as there are a couple places where the road passes up and over some lava barriers, where the road gets chewed up and is littered with pointy lava rocks.

Most of the mountain (including the summit) lies on a square-mile section of BLM land. The surrounding lands are a checkerboard of Arizona Trust and private lands. However, access is not restricted.

The Flagstaff Flyers are the local radio-control flying club, and their website has some good information about Merriam Mountain:

Please note: the road up to the summit requires 4-wheel drive, partly to protect against damage the spinning wheels of a 2-wd vehicle would cause, and secondly, the upper section is extremely steep, pushing a 25% gradient. Most stock 4-wd should be able to get to the "North Bench", but for the summit, you'll want a more robust vehicle like a Jeep. Use 4-wd low and rumble up and down the road slowly. I recommend park low and enjoy the walk.

There are no developed campgrounds in the area. The Coconino National Forest boundary is just a couple miles west. You could camp somewhere in there. At this elevation, the forest is more juniper/pinion woodland, not the big ponderosa tracts seen nearer Flagstaff.

The hike follows the steep road to the top. Assuming you parked back at the road junction below, it's about two miles each way and 1,450 feet of gain. Route-finding is obvious.

The first mile gains moderately to a flattish section called the North Bench. The final portion is much steeper. Coming down, the road is rubbly and it is very easy to slip. It took me just under two hours for the round trip.

The veiws from the top are amazing. 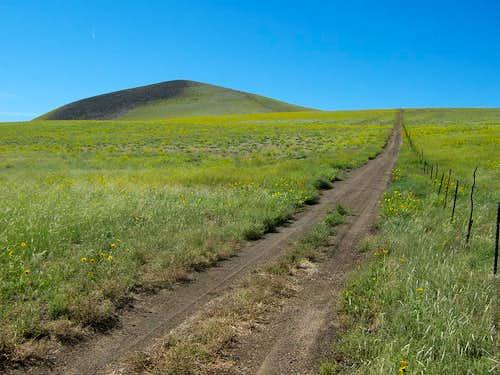 The hike up is along the road, with fields of tickweed flowers (usually late-summer and fall)

Indian Route 70 eventually leads to the Grand Falls, a thousand-foot wide series of sandstone ledges in the Little Colorado River that, when flowing, is the largest waterfall in Arizona, like a muddy Niagara Falls. This is on the Navajo Nation. There is no development, and it's hard to know when the falls are flowing heavily. Google "Grand Falls Arizona" and view the images. (I did not include any here to avoid any copyright issues).

Back on pavement, you can continue east about 15 miles to the little town of Leupp (pronounced "loop"). Leupp is the largest Navajo town in these parts, known mainly for its boarding schools. There's not much to see in the town itself, but the drive is lovely. You can continue east to AZ-99, then follow that 18 miles to Interstate-40 near Winslow, or back into Flagstaff 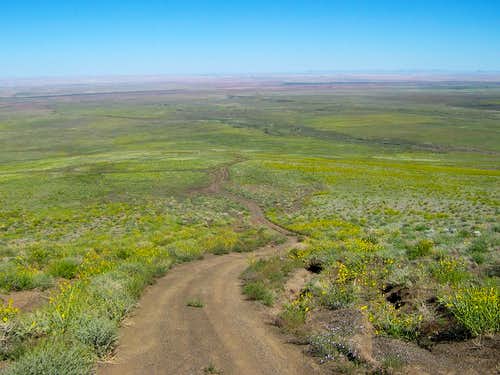 Looking east into Navajo Country from the summit.