The Metacomet Trail, roughly 50 miles from end to end, stretches from a point just north of Meriden CT all the way to the CT/MA border. It is a fun trail to hike for a day or two. Camping is not allowed in some areas as parts of the trail pass over private property where the land owners are nice enough to allow hikers to pass through.

Though hikers will find some of the trail to be "non-strenuous" in some areas, the views of the Connecticut valleys as well as old historical sites 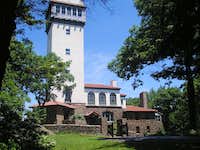 (Heublein Tower, Old Newgate Prison and many more) will greatly make up for this.

The area I personally am most familiar with, the area I feel offers the most strenuous hiking and the best views, starts in the town of West Hartford,crosses through Avon, Simsbury, Bloomfield, and ends in Tarrifville. This is because a great portion of the trail in this area rests on top of Talcott Mountain where you'll find yourself traversing over the metacomet ridge. The friends of Hublein Tower organizations states, "The metacomet ridge, it is believed, took hundreds of thousands of years to form from a series of basalt lava flows that came up through faults in the earths crust.

The climbs up and down the mountain are always fun. CTXguide regards the trail as, "the official rock-climbing trail of Connecticut with dozens of impressive cliffs and high rock walls," as well.

So whether you feel like a simple day hike, or packing your climbing gear and hiking until you find a rock wall, this section of the Metacomet trail is perfect!

Coming from Hartford: Take Rt 44W through West Hartford. When you come to the bottom of Avon Mountain you'll know you're close. Roughly a mile up the mountain, on the right hand side, take the entrance to Hartford Reservoir #6. Park your car and look for the "Connecticut Blue Blazed Trail" sign at the northern end of the parking lot, you can't miss it. The trail follows the entire western side of the reservoir.

Coming from the north: Take Rt 44E. The entrance to the reservoir is roughly two miles up the mountain from the CT rt 10-202/rt 44 intersection in Avon.

You'll follow the Hartford #6 reservoir along its western edge for a long while. In the morning hours the reservoir is beautiful as it offers reflections of the rising sun. 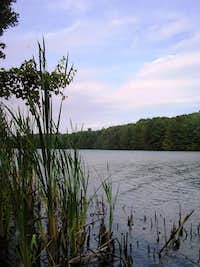 After hiking for just over two miles you'll reach the end, the far northern edge, of the reservoir. Located on the left side of the trail is a marker for the turn off 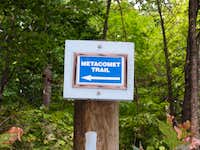 The sign at the left hand turn off the trail.

(a blue blazed trail sign). You'll have to keep your eyes open and take this left turn as the reservior trail continues on past this trail head.

After making the left turn you'll find yourself heading up a very steep, rocky trail. Now you're heading up the back side of the mountain. From here it's roughly 3/4 of a mile to the top of the mountain and there is only an elevation gain of 475 feet. Though this doesn't seem high, the climb continually changes from flat sections of the trail to steep sections at an angle of, I'd say, 60-65 degrees. Watch your step here, it's rocky and rolling and ankle can be easy.

Soon you'll find yourself atop Talcott mountain with a cool breeze always blowing in from the west. Continue following the trail over some rocky outcroppings until you find yourself at a radio tower. Just beyond the tower is a great cliff to stop for a minute and admire the view of the valley. Climb over to the southern side of the overhang and look down. You'll see a strange rock formation, rising about 50 feet from the ground, within the trees that looks like a spire or a column.

From the Cliff you'll be able to see the top of the Heublein tower over the tree line. Continue heading north and you'll come upon the tower very quickly.

About a quarter mile past the tower keep your eyes open for a right hand turn off the trail. Unfortunately it is not marked but this is where you pick up the Metacomet again. This area (around the tower) between the cliff and the next trailhead for the Metacomet is all public trail. If you don't take the right hand turn off the public trail you'll find yourself hiking with many other people and eventually you'll be in the parking lot for Heublein tower, roughly a mile and a half down the mountain.

After making the right turn the trail becomes noticably less traveled as it is often time overgrown with brush. Hike another half mile and you'll come out to another cliff. This is where I always stop for a quick bite to eat. Admire the views and keep moving.

Soon, you'll start heading down the mountain again, climbing over large boulders and following the trail which begins to get windy and twisty. Within the same mile, the trail faces every direction. Don't get discouraged, you'll be heading north again soon and finally feeling like you're heading the right way.

After hiking for 10 minutes more or so you'll come to the worst part of the hike. Here you'll have to cross CT rt185 to continue following the trail on into Pennwood State Park, crossing into Bloomfield. Be careful crossing as it is a fairly busy road.

The first thing you'll see in Pennwood is the parking lot. Walk straight across it to the north end and take the trail to the left. The views here in Pennwood are not as spectacular as they are on Talcott but soon you'll be back to edges and cliffs and after about a mile and a half of hiking you'll be at the "pinacle." The Pinacle, not to be confused with Connecticut's Pinacle Mountain, is another cliff and a great spot to stop and admire the view. Look south, you'll be able to see Heubline Tower atop Talcott. It seem much farther away than it truly is.

Supposedly, Pennwood State park is where the Connecticut Department of Environmental Protection releases the black bears that are caught wandering throughout nearby towns. Keep your eyes peeled!

The rest of the hike is relatively flat but there are a few more scenic overlooks to stop at. You'll finish the hike in the town of Tarrifville along the Farmington river. Often times you'll see people fishing in the rapids.

Good pair of boots or shoes and a backpack. Poles are optional. Pack something to eat if you wish. Binoculars, as always, are an added bonus on top of a mountain.

The Topo maps posted on this page are from the Connecticut Explorers Guide website.