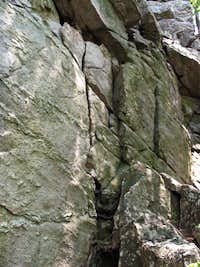 Cording
Boy Scout Ledges may get more notice because of the trailside access and the very popular Cub Scout Cracks route, but nearby Middle Earth, passed along the way to Boy Scout Ledges, has more routes, longer routes, and harder ones than its neighbor does. It is, in my opinion, the best climbing crag in the summit area of Sugarloaf Mountain. The best climbing on Sugarloaf is actually at White Rocks, but that spot is about a mile away from the summit area and reached by a separate road.

Although there is a Sugarloaf Mountain page on SP, it deals with the hiking routes and not the technical climbs. Therefore, I have made a mountain/rock page for this crag and attached it as a child to Sugarloaf.

The white quartzite comprising these crags is both pleasing to the eye and generous to climbers. The routes here get up to about 40 feet in vertical climb but often feel longer. They are high-quality routes due to their solid rock, abundant cracks that accept cams and nuts very nicely, and the many overhangs and sheer faces. As implied, there are good options here for trad climbing. However, most people toprope the routes, and there are good natural anchors atop the crag.

Although this crag is just a five-minute walk from the parking lot, it sees less usage than Boy Scout Cracks a few minutes beyond it. So while groups may gather up there, you might climb in relative peace and quiet at Middle Earth. Beware summer when groups from youth camps come out on weekdays!

A selection of routes, from left to right as one faces the crag from the trail:

• White Quartz Wielder (5.8)-- Fun, feels easy for the grade. Climb the big crack at the left end of the crag and pull the overhang on the right side of the crack splitting it.
• Bloodguard (5.10a)-- Considered one of the area classics. Some call it 5.9+, but it is notably harder than other 5.9 routes in the area. The crux is the first 20' or so, with small holds. Up higher, pull two small roofs.
• Cording (5.3)—Brendan (SP member climbhighnow) and I climbed this one. He led the route and I followed and cleaned. Our pet name for the route was “5.3 My Ass Overhang” because the route diagram in the book we had showed the climb pulling through a respectable overhang. Brendan led the route around the right side of the overhang, and then we followed the crack system to the top of the crag. Afterwards, we toproped the overhang just out of spite, and for a little fun, too. Later, Brendan found in another book that the overhang was part of a different, 5.7 route.
• Butterfingers (5.8)-- Fun route following a series of roofs. Not the hardest 5.8 at Sugarloaf, but sustained as opposed to others that have a single serious climbing move.
• Rhythm Roof (5.9-5.11)-- Challenging route that goes up an easy corner and then has a tricky traverse under a huge roof. Some descriptions put this part at 5.6/5.7, but it is harder. Next, you find yourself on Seven Wishes. Move left to pull the big roof and finish to the top. Not sure exactly where the 5.9 comes in; the way I pulled the roof felt easier, and another way I tried it felt way, way harder. Note: When a climber took a lead fall in 2005, a cam blew out a rock, making the roof pull harder, and it has been suggested that it is now more like 5.11. That would explain the greater difficulty of the other way I tried.
• Seven Wishes (5.6)—Nice crack/flake route with some scary exposure on lead. Tons of pro placements, very friendly to passive gear.
• I Am a Cam (5.7)
• A Flake Called Lee (5.5)—Brendan led this. It climbs a crack and then a right-facing flake. The crux is around the middle, where you pull a flake, probably by laybacking, and you have no idea from below that this spot will be hard. After the crux, the rest of the route is more like a scramble; the fun and challenge are on the lower half. Since that first climb, I have led this one twice, and despite the 5.5 rating, the crux still feels a little scary.
• For Short People Only (5.4)—Brendan led this one, too, and I have now led it twice myself. It is about ten feet right of A Flake Called Lee. The crux is really the opening move, which involves an overhanging block. We actually thought this route was harder than Lee simply because of the opening move. Good chimney technique helps a direct start; you can also skirt the overhang via a horizontal crack to its right. Some descriptions put this route anywhere from 5.3-5.5. It depends on how you negotiate the overhang.
• Hyper-Gamma-Spaces (5.12a)—the big roof to the right of For Short People Only.
• In Your Head (5.7)-- The grade comes from pulling an overhang; everything else is pretty easy.
• Sugarloaf Arête (5.7)-- Just right of In Your Head. No move on it feels as hard as the crux of In Your Head, but it is more sustained climbing.
• Black Planet (5.9)-- For the 5.9, stay left of the purple splotch but do not use the arete on the left; then pull the overhang. It is much easier to go to the right of the splotch, like 5.6 at most. In my opinion, you get the 5.9 on this route by taking the harder of two starts (you'll know it when you see it) and by pulling the overhang where it's hardest. The face itself feels more like 5.7.

This page's image gallery has pictures of some of the other routes. 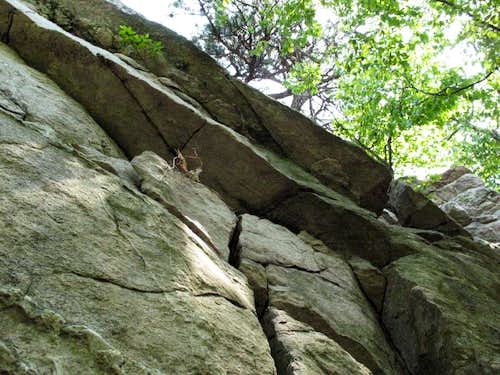 From I-270 in Maryland, take Exit 22 onto MD 109 and head west. In about three miles, turn right onto Comus Road. In a few minutes, you will reach the entrance to Sugarloaf. Follow the one-way road up the mountain and park in the West View lot. Take the Green trail and hike about five minutes to the crag, which is off the trail to the right. Some minor scrambling is necessary to get to the crag itself.

The mountain is privately owned by the Stronghold Corporation but is open to the public from 8 A.M. until one hour before sunset. No alcohol is allowed, so keep your cold after-climb beers well-hidden. Clean up after yourself and obey posted regulations so this place will continue to be open to the public.
In recent years, there have sometimes been area closures in the spring due to nesting ravens. Look out for and heed any signs marking closures.

The link to the Eric Horst reference doesn't work.

It used to. The site seems to have been shut down or moved. This is why I sometimes hesitate to post links.