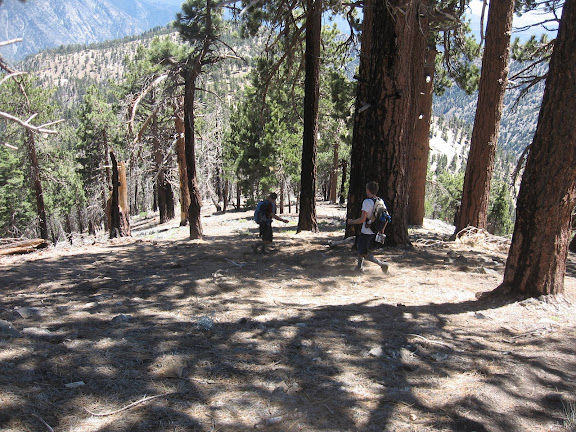 
Hikes far up the ACH tend to have the best atmosphere in my opinion. The terrain is lovely, views can be had in all directions, and in many spots there just aren't that many people.

So for this hike we headed up to a specific area I had not tackled: Hawkins and Copter ridges. With the ACH now open past Islip saddle, this combined hike can be done with pretty resonable stats.

We drove up a mile or two past Islip Saddle, to a pullout directly across from a use trail that heads directly to Windy Gap. Starting here cuts off some miles and elevation gain than from Islip Saddle.

So we hiked up quickly to Windy Gap (it was windy as usual), and headed west on over to Mt Islip. We then turned around and headed back to Windy Gap. From here, we took the - I believe - old Windy Gap trail heading south. This trail is clearly not maintained, with many fallen trees presumably from the Curve fire, or some other one.

We took this trail generally heading south until a point where it switchbacked once a gain to eventually intersect an old fireroad. However we did not feel like walking that way, so we decided to do a little cross country on this part down to the fire road just below us. This involved some scrambling and then some fun scree descent (as you can see in my shaky videos).

cross country to hawkins 1 from Zé Apelido on Vimeo.

cross country to hawkins 2 from Zé Apelido on Vimeo.

We continued on the fire road as it headed to South Mt Hawkins. Again, at some point the fireroad switchbacked, and we just wanted to go straight.

Now note that these ideas of veering off the trail don't always equal faster routes. This was the case with today. We cross over a small gully and then proceeded to scramble up the west face of S Mt Hawkins for a few 100 feet. The ground was loose so this ended up being a lot of work. We eventually intersected the fireroad, and just followed it up the rest of the way.

S Mt Hawkins has nice views; unfortunately they would have been better if there was a lookout. Oh well. There were still some remnants.

From here we continued back along the Hawkins ridge trail, bagging Middle Hawkins before reintersecting the PCT heading toward Mt Hawkins. I thought I saw some use trail on the south face of Mt Hawkins, so I decided yet again to go cross country to find this use trail to cut across to Copter Ridge. Well at some places I actually did find a use trail, but it was more likely a game trail. It was okay in spots, but overall probably just slowed us down.

cross country to copter 1 from Zé Apelido on Vimeo.

Eventually we intersected Copter Ridge, and headed down ~ 2 miles to the designated peak. This ridge is really nice. I have nothing esle to say about it.

The hike back up to Mt Hawkins was nice and tough, a few steep sections with 1 or 2 flat sections mixed in giving 1500 ft gain in maybe 2 miles.

We did not stay too long at Mt Hawkins, but it has great views. I highly suggest it, especially as it's just off the PCT.

From there, we headed back to Windy Gap and down to the car.

The photo show I really enjoyed!

thanks. I think this area (Twin Peaks, Williamson, Hawkins) is the nicest in the San Gabriels